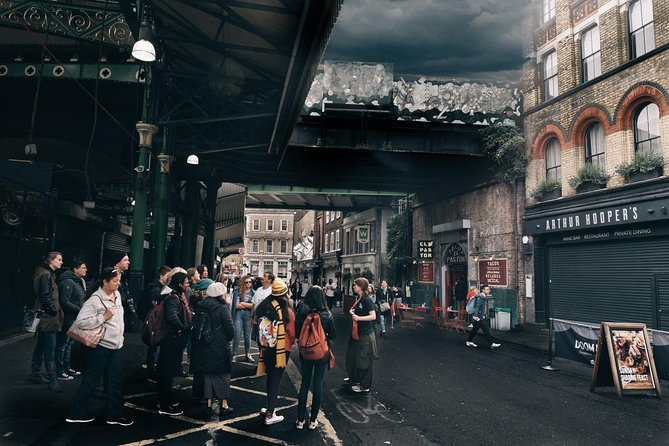 Take the original Harry Potter locations walking tour of London. Get sorted into houses and test your Potter trivia. We wend our way through Soho, Covent Garden, Trafalgar Square and many more stops - each with its own showbiz backstory!

Potter in the footsteps, (broom steps?) of your favourite Hogwart students, actors and screenwriters around the cinematic world of London. Your guide is a movie enthusiast, armed with weird and wonderful film trivia.

You will be put into teams - prepare to have your movie knowledge tested in our Silverscreen Quiz! There are several other games along the way with fabulous prizes to be won.

Visit the sites that inspired the movies, from classics and silent film, all the way through to Bond, Marvel movies and romcoms.

See London through a Harry Potter's glasses on a 2-hour adventure around the city.

INR 1,171
p.p. onwards
Itinerary
This is a typical itinerary for this product

Our guide will start the virtual tour at the Palace Theatre. The theatre is a stones throw from Soho, which we will explore along the way!

Millennium Bridge, one of the more modern structures in London, has been featured in many movies. It's a striking image.

Borough Market, a bustling marketplace offering everything from cupboard essentials to luxury treats.

King's Cross Station has a beautiful array of impressive architecture.

star star star star star
This was brilliant fun, we just finished the virtual tour, we got some good facts, ideas of places to visit when we eventually get to london and we laughed so much throughout. The quizzes were so much fun, we came second. Would highly recommend this virtual tour to anyone. Hagrid was excellent.

star star star star star
@syc_mason The tour guide Mason led us to the most famous spots which inspired the HP series but also provided infos about Edinburgh's famous buildings at the same time. It was a great tour and I can highly recommend it.

star star star star star
We are a multi generational American family and our members reside in 13 households, 5 states, & 3 time zones, but we still wanted to see each other to celebrate the holidays despite Covid! With the help of your services and our incredibly accommodating tour guide John, we had a wonderful time with each other virtually touring your lovely city. Thank you!

star star star star star
Thank you, Tabarek. for showing us the Harry Potter Sites and everything else on the way. The Chanel-Story was it for me. We enjoyed the Tour and would book it again. Devi & Rosina

star star star star star
We have just done the Harry Potter tour in York. It was brilliant! Informative and fun for kids and adults! Our tour guides (David and Jing) were amazing!

star star star star star
Tabarek was an excellent Guide. Her german was perfect and we really enjoyed all the interesting points during the walk.
Previous Next
keyboard_arrow_up