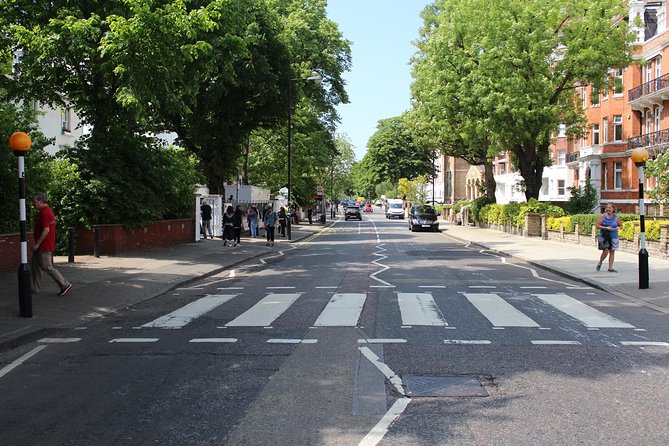 Enjoy a 3-hour black cab tour of Beatles locations in central London including Abbey Road and Trident Studios. This guided, small-group tour will show you their hangouts, gig locations and much more. In total, you will see over 30 Beatles related sites on this magical mystery tour around London.

See the world famous Studios used by the Beatles for many of their recordings.

Meet your guide at Sloane Square Tube Station  and start your journey into the world of the Beatles. You will experience the most comprehensive tour of Beatles sites in London on this bus adventure into the world of John, Paul, George and Ringo.

Trace the rise of the world’s first supergroup and learn all about Beatles history. You’ll have the chance to get out of the cab on several occasions, take pictures and see the sites up close.

See over 30 Beatles related sites including the home of John, Paul and Ringo, the studios where they recorded many of their famous tracks, some of the famous locations where they played live gigs including the famous rooftop concert. You will also visit sites featured in album covers, photo-shoots, and even film locations from Help! and A Hard Days Night.

During the tour you will hear Beatles tracks as you travel through the London of the Fab Four and to a time when the boys from Liverpool ruled the world of music. Your Beatles tour ends in Soho.

star star star star star
Tony was a wonderful guide. He was very pleasant. He was knowledgable about The Beatles but also had great overall conversation. We truly enjoyed him and the tour.

star star star star star
Paul was an amazing tour guide and driver. Very accommodating, personable and enthusiastic. And of course he knew everything there was to know about the Beatles and London. Tour exceeded our expectations. Highly recommend for any Beatles fan.

star star star star star
This was a wonderful tour! Mick was very Knowledgeable about all things Beatles and made so many important stops of former homes and recording studios. Abbey Road was great! We thoroughly enjoyed our time and Mick was a pleasure as our Guide! He is truly good at this gig.

star star star star star
Amazing tour! Paul was our guide for the day and he was very informative about each stop on the tour, which Beatle did what, and told us great stories about them. He was great fun and made sure we were having a great time as well. Paul was nothing short of exceptional. He has truly mastered his craft and cares deeply about his work. Filled with interactive pictures and videos as well, this truly added to the experience. From the more obvious to the obscure facts Paul knew it all. You surely won’t be disappointed if you get Paul as your guide for this tour.

star star star star star
My wife and I were driven around London in a comfortable and clean vehicle. As we were the only people on the tour we were able to talk to the guide as needed at each location. We liked seeing the homes and studios used by the Beatles and hear their stories. The guide was very informative. We had a great time.

star star star star star
Excellent tour. Our guide Paul was friendly and knowledgeable. We had the best time going to all the out of the way important Beatles landmarks

star star star star star
Get your ticket to ride on this worthwhile Beatles Tour of London by Private Black Taxi today! The black taxi is very modern (electric car), comfortable, and spacious enough for 4-5 adults. Our tour guide was very knowledgeable about The Beatles history and the tour covers many highlights of The Beatles during their time in London. Of course, the best part of it all for me was the stop at Abby Roads Studios where you can see the studio from the outside, buy some Abby Roads merchandise, as well as leave a message on the studio wall. The tour is packed with sites and commentary that the 4 hour tour goes by fast. Beatles fans, this is a must!
Previous Next
keyboard_arrow_up