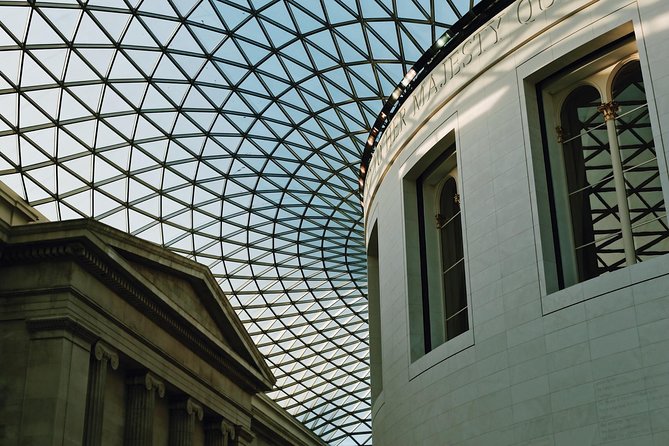 Your 5.5-hour semi-private (8 Guest Maximum) guided combo tour is a history lover’s delight as you explore central London and its iconic British Museum. Your guide will lead you through the city’s streets before taking you to one of the largest collection of human artifacts in the world. You will pause for lunch in between and the group will be limited to just 8 people. Hotel pickup and drop-off are not included.

SEMI-PRIVATE 8ppl Max. English 10:00
Save money by booking a group up to 8 guests per guide. This option NOT FOR WHEELCHAIRS.

AUD 532
p.p. onwards
Itinerary
This is a typical itinerary for this product

Start off your walking tour to London with an introduction to culture and civilizations at the monumental collection of the British Museum, spanning 6,000 years of human history. It features items from all over the world like Samurai armor and rare Assyrian lion hunt reliefs. Our guides will take a serious but enjoyable approach towards the museum’s galleries, discussing primitive tribes and fallen empires through a carefully chosen selection of items. You will learn about the Mummy of Katebet, the Lewis Chessmen and the original Rosetta Stone.  Walk away with an understanding of what humans have achieved during our short history and hopefully you will be proud to call yourself a part of this incredible species.

After a break for lunch, continue with your guide to understand London through its history as you walk through its urban landscape. Our expert guides will peel back the layers as you walk past some of the most iconic places in central London like Trafalgar Square and the House of Parliament. Learn about Chaucer at Westminster Abbey or maybe bump into the Prime Minister at 10 Downing Street. The tour will pass through the sweeping green parks, bustling crowds, and quaint squares that define London. Learn about the monarchs and leaders, like Queen Elizabeth II and Winston Churchill, while also taking advantage of your local guide, who will be more than willing to share a few of the city’s best kept secrets as you explore together.

After a break for lunch, start your walking tour at Covent Garden, an area of London whose thriving history started as early as the 7th century as a Saxon settlement. It is a must-see destination for anyone who enjoys, shopping, theatre, restaurants, bars, history and culture.

You will then pass through Trafalgar Square where you will learn all about the history of this public square which commemorates the Battle of Trafalgar, a British naval victory in the Napoleonic Wars over France and Spain. During its history, the square has been a place for protests and demonstrations which continue to this day.

Nelson's Column is a monument in Trafalgar Square, built to commemorate Admiral Horatio Nelson, who died at the Battle of Trafalgar in 1805.

Next you will discover the rich history and heritage of Admiralty Arch, a landmark building in London, providing road and pedestrian access between the Mall and Trafalgar Square. It was commissioned by King Edward VII in memory of his mother, Queen Victoria.

You will then walk along the street which runs between Charing Cross and the Houses of Parliament, known as Whitehall. The name Whitehall also applies to the group of small streets, squares and government buildings adjoining the street. Whitehall has been known to be the site of principal government offices since the establishment of Henry VIII’s court at Whitehall Palace in the 1530s.

You will also walk by St. James’s Palace, the most senior royal palace in the UK. It has been the setting for some of the most important events in Royal history after having been a Royal residence for over 300 years.

residence of the UK’s sovereigns since 1827. Today Buckingham Palace is very much a working building and consists of the administrative headquarters of the Monarch.

You will also pass by the Churchill War Rooms, a museum that makes up one of the five branches of the Imperial War Museum. The museum is made up of the Cabinet War Rooms, a historical underground complex that housed a British government command centre during the Second World War, and the Churchill Museum, a biographical museum dedicated to the life of Winston Churchill.

During your tour you will also visit the beautiful Westminster Abbey, a large, mainly Gothic abbey church which has touched the lives of kings, queens, statesmen and soldiers since 960 AD, having been the coronation church since 1066.

Next you will see the Westminster Palace, also known as the Houses of Parliament. A Gothic style building whose history spans over 900 years, it is where the House of Commons and the House of Lords meet.

Finally, you will see one of London’s best-known landmarks, Big Ben, the clock tower at the end of the Palace of Westminster.

star star star star star
The tour was amazing. Anthony was extremely knowledgeable and revealed the stories behind the historic artifacts to make them come alive.

star star star star star
Egypt and Babylon section was our favorite part. The guide Matilda was very profesional and friendly. She really made the visit enjoyable and took us to the relevant places. We learned a lot from her

star star star star star
Excellent tour with Tony! He was wonderfully knowledgeable with humor and personality. He added tidbits of information we hadn’t heard and added color to every aspect of the tour.

star star star star star
Danielle was great! She was extremely knowledgeable. She also tailored the tour to things we wanted to see and to make it interesting for my 9 year old niece. We had a great time and I would definitely recommend this tour.

star star star star star
Had a great tour of the British Museum and Westminster. The tour guide took me through a selection of exhibits in the museum tailored to my interests, answered all questions I had, and pointed me in towards objects she thought I would enjoy. The second half of the tour was walking around Westminster with frequent stops by landmarks to explain their significance and history. The tour surpassed all my expectations and I would definitely recommend it to friends.

star star star star star
Kathy is incredibly knowledgeable. She was thorough, courteous, and efficient in touring us around. We needed to leave a bit early and she arranged the visit so we would not miss any highlights.
Previous Next
keyboard_arrow_up