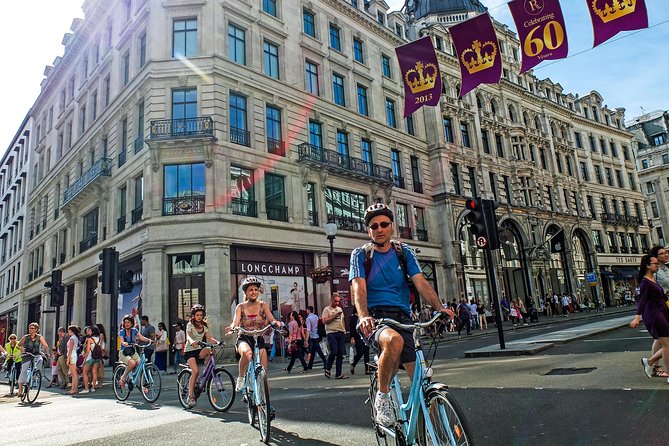 London pulses with a creativity like no other. Boasting a rich and diverse history of statesmen, artists with spectacular and influential imaginations, there’s no better way to whet your appetite, for what’s on offer than to take a relaxing tour through the West End. Discover some of the city’s theatrical and culturally significant sights and let pure poetry stir in your heart beneath the boughs of handsome tree-lined cycle paths.

Love London in Spring 14:15
Love London is a relaxed tour through the West End exploring some of the citys most theatrical, artistic and culturally significant sights. On the way you'll pass along handsome tree-lined streets.

INR 3,040
p.p. onwards
Itinerary
This is a typical itinerary for this product

The best views of London

Get up close to this iconic church, where all of the kings and queens of England have been crowned and buried.

The west district of central London known for its shopping and theatres.

Start and finish your ride from out tour centre.

star star star star star
Birgit was very friendly and did a great job guiding our tour. I was intimidated by biking in London, but she helped me feel comfortable. We had a great time!

star star star star star
A fantastic way to see so many iconic sites of London in a short time, with informative and quirky bits of history I didn’t even know I wanted to know! It was surprisingly easy to cycle around and has given me a good overview of the city, and a big list of places I want to return to and explore more. I would thoroughly recommend this to first time visitors especially. Covers way more ground than a walking tour and more personal than a bus.

star star star star star
It is our second ride with London Bicycle Tour. The first one was in the autumn years ago. I thought the trip would be more or less the same with the first one and didn’t expect too much. Turned out we explored more new sites by new route in the second one. Thank you Birgit for showing us the energetic city and bringing us to ride on the busiest roads with buses following our bikes. I am not good at riding but Birgit kept me at her back to ensure I am with the team. She also demonstrated that bike riders also have the right to use the road. I think it was an amazing culture learning part of the trip. The bike tour is absolutely the most incredible activity I have experienced in my trip in London. Highly recommended to families. I might join the third time if I have a chance in the future.

star star star star star
Really easy to find. We got tube to Westminster then walked across the bridge, but there is a nearer tube at Lambeth North. There were 15 in our group - from Holland, Argentina, Italy, Germany and us two brits from Liverpool! We had a fantastic time. Our guide, Chris, was really knowledgeable and fun. We covered lots of areas that we hadn’t been to. Everything seemed really safe. The three and a half hours went really fast. Fabulous. Big shout out to Chris and -also too to Otto who was in the bike shop.

star star star star star
I enjoyed the tour, it didn’t go too fast, nor too slow—a really nice pace. The stops were at points that were very nice tourist points. The guide was great, had patience with my mom’s disappearing act. Would definitely recommend, especially if you’d prefer not to walk around London.

star star star star star
This was amazing and you get to see amazing parts of London. Edmund was an amazing guide. It was his first time and he did amazing. I recommend this tour!!’

star star star star star
Birgit was fantastic and ensured everyone was always safe and cared for. Birgit catered for all abilities and made everyone feel included and important. Excellent

star star star star
Tour was very informative and fun with many extra tidbits of fun facts. A short overview of the tour before starting would have been helpful for orientation

star star star star star
Enjoyed our bike tour though London together with Chris. It was great fun, totally recommended! For people who find London pretty overwhelming the bike feels like a safe space from where to experience London is an awesome way!

star star star star star
Great tour, the tourguide was super friendly and nice (Chris) and had some fun suprising facts about the famous sight. Highly recommend!!
Previous Next
keyboard_arrow_up