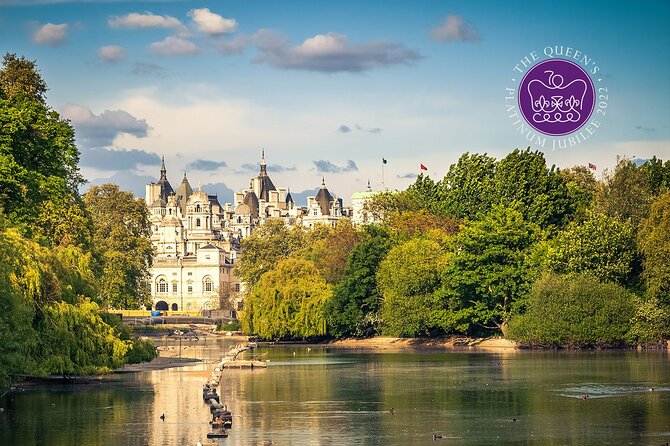 Experience a special Royal-themed walking tour of London with an expert story-telling Blue Badge Guide. Uncover the story of the British monarchy in London as you visit important locations and monuments. Discover relaxing back streets and oases in the capital before encountering the beauty and wildlife of the Royal Parks.

• Discover the story of The Royal Family in London with a qualified Guide
• Visit beautiful, quiet back streets of London
• Visit the Royal Parks – an oasis of natural beauty and wildlife
• Personal audio headset: never miss a word of your guide's live commentary

INR 1,704
p.p. onwards
Itinerary
This is a typical itinerary for this product

The Green Park is a peaceful triangle of mature trees and grasslands offering a quiet retreat from city. Surrounded by Constitution Hill, Piccadilly and the Broad Walk, the park is home to Britain’s rarest native timber tree – the black poplar – as well as native oaks and hawthorn: a tree that supports a lot of wildlife.

St James’s Park was the first of The Royal Parks to be opened to the public and it provides habitats for a variety of different species of bird life including the robin, blackbird, wren, blue tit, great spotted woodpecker, and tawny owl. It is most famous for its Pelicans who have resided in the park for nearly 400 years. The Pelicans were originally presented as a gift from the Russian Ambassador to King Charles II.

Enjoy impressive views of the lake – a key habitat in the park and home to over 15 different species of waterfowl.

The park’s famous flower beds at the front of Buckingham Palace are a familiar backdrop to pageants including Trooping the Colour, as well as state visits and other ceremonial occasions.

This beautiful walking tour allows you to get close to some of the most iconic sites in London’s including Buckingham Palace, the Mall, Horse Guards Parade, and the Victoria Memorial.

Stand in the spot opposite the Palace where thousands have previously gathered for historic events such as the Coronation of Her Majesty Queen Elizabeth II, the Trooping of the Colour, the Queen Mother’s 100th Birthday celebrations and numerous Royal weddings including Princess Diana and Prince Charles, Katherine Middleton and Prince William and many more.

Your expert guide will explain the central role the British Monarchy has played in the history of the capital during the lifetime of Her Majesty Queen Elizabeth II, from the Blitz to the modern-day. Visit important statues and monuments to key figures that have shaped this amazing story and learn of the work that goes into delivering State visits, investitures, Garden Parties, commemorative events and much more.

The Victoria Memorial is a monument to Queen Victoria, located at the end of The Mall in London, and designed and executed by the sculptor Thomas Brock. Designed in 1901, it was unveiled on 16 May 1911, though it was not completed until 1924.