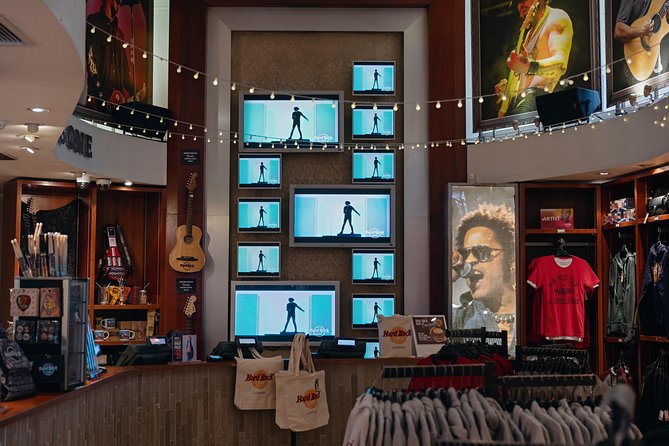 ‘Discover the Rock capital of the world, on this Hard Rock Afternoon Tour of London, beginning with a private viewing of its world-class collection of memorabilia.
Re-trace the steps of the bands and icons that defined our times and learn of their camaraderie and fearless invention as they wiped clean and drew again the face of popular music.
Your small group tour is led by an expert Rock guide and includes a ‘School of Rock’ virtual trivia quiz as well as the opportunity to re-create one of the most famous album covers of all time.

INR 3,074
p.p. onwards
Itinerary
This is a typical itinerary for this product

BEHIND THAT LOCKED DOOR…

As our VIP you are in for a treat as we begin at London’s only rock n’ roll museum: The Vault. Belonging to Hard Rock Cafe London, it is a treasure trove of the most valuable pieces of music memorabilia from across the globe!

Tucked away in an old Coutts Bank, The Vault was once used to protect the Queen’s coffers.
Guests on the Hard Rock London Afternoon Tour are afforded a private viewing of The Vault.
Gaze on in wonder as one of Hard Rock’s expert Rock Masters takes your VIP group down to the basement, beyond the high security door and into a music lover’s paradise.

The musical adventure you will embark on is a combination of poignant reflection, incredible fun and a voyage of discovery – do you have what it takes to join our ‘School of Rock’?

Harry Nilsson’s former flat is the sad setting for the exit of two of music’s most beloved personalities: Cass Eliot of the celebrated Mamas and Papas and the inimitable Keith Moon – known for his unique drumming style and his eccentric, often self-destructive behaviour.

At Garden Lodge see the former home of Queen legend – Freddie Mercury, known for his flamboyant stage style and his four-octave vocal range – while discovering the ongoing love story that lasted for his whole life.

Well rock fans you knew it was coming… it’s trivia time! Life-long fans will have the opportunity to test if they have what it takes to join the ‘School of Rock’ with questions by Rita Gilligan – Hard Rock’s original Rock n’ Roll waitress, international ambassador and MBE. Make sure you are keeping your eyes and ears open!

Learn of the ’27 Club’ – the astounding story that links the passing of some of popular music’s most treasured talents from American Blues Legend Robert Johnson through to Amy Winehouse.

No rock tour of London would be complete without a visit to the absolute Jewel in its Crown, and the world’s most famous pedestrian crossing! Having recently celebrated its 50th Anniversary and a return to the no.1 spot, The Beatles ‘Abbey Road’ has stood the test of time, representing their last recording at the world-famous recording studios in the leafy suburb of St. John’s Wood. Get in step as you take that legendary walk across the crossing re-creating one of the most famous album covers of all time.

P.S. Did you know Paul McCartney has a home that isn’t a long and winding road away?

Combining the eclectic vibe of Piccadilly Circus with the rock and roll lifestyle of the Hard Rock brand, Hard Rock Cafe Piccadilly Circus is the perfect conclusion to our virtual biopic through the icons of rock.
Walk in and be wowed by the walls adorned with authentic, one-of-a-kind memorabilia from decades of music history, featuring items from British music legends and international stars alike.
The emphasis is more on contemporary artists, with pieces from Freddie Mercury, David Bowie and George Michael sitting alongside outfits worn by the likes of Shakira, Nicki Minaj and Ellie Goulding. There is also a guitar once played by Ed Sheeran and a telephone box that once appeared in a One Direction video.
Your expert Rock Guide will introduce some of the most exceptional pieces before leaving you to explore the largest Rock Shop in the world at your leisure!

star
Booked and paid in full the Hard Rock Tour in London. Less than one week before the tour, it was canceled. Phoned to ask EE to help find a suitably similar alternative, but the condescending jerk on the phone was ZERO help. They refunded the GBP in full, however the foreign currency fees charged by my credit card provider along with currency value fluctuations left me short-changed - it literally cost me money for their decision to cancel. I was forced to source a suitably similar alternative, with short notice, that cost over $100 CDN more than the tour originally booked. Just beware before you book with EE.

star
EVANS TOURS have let us down really badly at the very last minute. We paid over £250 to go on this tour for my rock mad son in his actual 21st birthday and they've cancelled it a few days before saying not enough people were going. For a 3 hour tour, even our £250 should have been plenty to fulfill their commitments. I would thoroughly recommend never using this organisation which must be all about profit and nothing nothing about customers!
Previous Next
keyboard_arrow_up