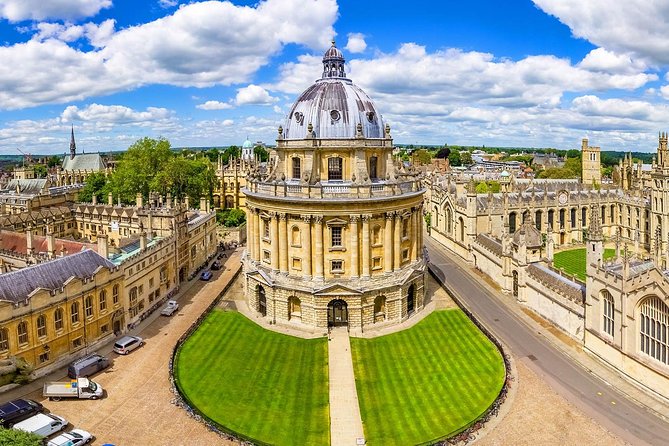 During this full day with your Expert Guide in a Private Vehicle, discover over 900 years of royal history at the home of the British monarchy, uncover the mystery behind the world's most famous Neolithic site at Stonehenge, and take a stroll through the medieval streets of Oxford as your expert Driver-Guide brings the history of this beautiful city to life.

Whether you're travelling solo, as a couple, group, or as a family, we're proud to offer a modern and prestigious fleet of luxury vehicles to cater for everyone.

INR 46,458
p.p. onwards
Itinerary
This is a typical itinerary for this product

Rising majestically above the skyline of Windsor sits Windsor Castle, the ancestral home of the British Royal family for more than 900 years and an official residence of the Queen of England.

Marvel at the splendour of the State Apartments, the grandest apartments in England, where priceless work by Rubens and Antony van Dyck adorn the walls, and beautiful murals cover its ornate ceilings.

Inside St George’s Chapel, where HRH Prince Harry married Ms Meghan Markle married in 2018, are the tombs of prominent previous monarchs including Charles I and Henry VIII. Located in the Grand Vestibule is The Nelson Bullet; a single lead musket bullet that famously killed Admiral Lord Nelson at the Battle of Trafalgar in 1805.

Catch a typical display of British pomp at the Changing the Guard ceremony, which takes on select mornings. Here, the handover of duties between guards to the Queen takes place who have faithfully carried out their duty to the monarch since 1660.

Travel back in time to Neolithic Britain and come face-to-face with a 5,500-year-old man and over 250 prehistoric objects at the world-class visitor exhibition centre. Visit the mysterious monument at Stonehenge and learn how it was built using rudimental tools and stone from quarries hundreds of miles away, as well as its link to the Summer and Winter solstice.

Our final stop is Oxford, famous for its university; the University of Oxford the oldest in the English-speaking world and has many prestigious colleges and notable alumni, including Stephen Hawking, J. R. R. Tolkien, Bill Clinton and countless others. Some were founded by monarchs, such as Christ Church College, which was set up by King Henry VIII in 1546.

Oxford itself is known for its distinctive architecture and holds the unique accolade of having examples of every architectural period going as far back as Saxon times. Wander its quaint cobbled streets on a walking tour of the city with our expert tour guide, who will bring the history and charm of this ancient city to life.

Traveler pickup is offered
Please contact the supplier for pick up and drop off location in London by time of booking or at least 14-10 days prior to your travel/service date of the tour, if you can.
Tour departs at approx. 8:30 am (Please meet 15 minutes before time)

Please note that you must contact us in advance to arrange your pick up & drop off location in order to redeem your tour.

star star star star star
It was an amazing trip. We really enjoyed the Warwick castle. We enjoyed Shakespeare’s birthplace. It was an enriching experience. Godfrey was really outstanding guide.

star star star star star
Absolutely loved this tour. Our guide Simon had a lot of interesting stories about all sites and a great sense of humor. Very smooth ride in a very comfortable bus. Would definitely take another tour with this company and Simon.

star star star star
Excellent tour. We enjoyed our all day tour. The van driver drove very well and we were comfortable and relaxed while going from place to place. Our tour guide Karen was very informative, made nice conversation and took a lot of group pictures of us along the tour.

star star star star star
Excellent tour with Sacha, our tour guide. Booked a trip in Spanish, through Expedia and everything went well, according to schedule. Tour guide very kind and worried about everyone in the group. Departure from Victoria Coach Station was at 8:00 sharp. All buses have WiFi, which will allow you to keep connection As a suggestion, bring your own food, since lunch break is close to 5PM.

star star star star star
We went on the 11 hour tour of Windsor, Oxzford, then Stonehenge at sunset, after hours. Note that Windsor does NOT include a tour of the castle. And by the time you get to Stonehenge, everything is closed, the gift shop, food, everything. Which is the point, because you get to go after hours inside the stones. However, this also means that you go 11 hours without ANY kind of refreshment offered by the tour company. And with so little time at each stop, that genuinely sucks. When we finally returned to London at 11:30 pm, we ran into the first open food stall we found and devoured whatever it was they served us. Note also that the WiFi on the tour bus never worked the whole time. The guide was knowledgeable, very ironically British, and a bit odd, but mostly funny. I would do the tour again.

star star star star star
I really enjoyed the tour it was nicely and professionally organized. Our tour guide Patricia was really great. She gave us so much interesting information in every step of the way. She is very knowledgeable and has a very nice attitude towards guests. Thank you so much Patricia..

star star star star star
Had an excellent fun filled day on our tour! Our tour guide was Ildy and our driver was Nicholas. Ildy was full of information and provided many fun facts along the way! Nicholas was a great driver and just a really friendly man with a great sense of humour :)