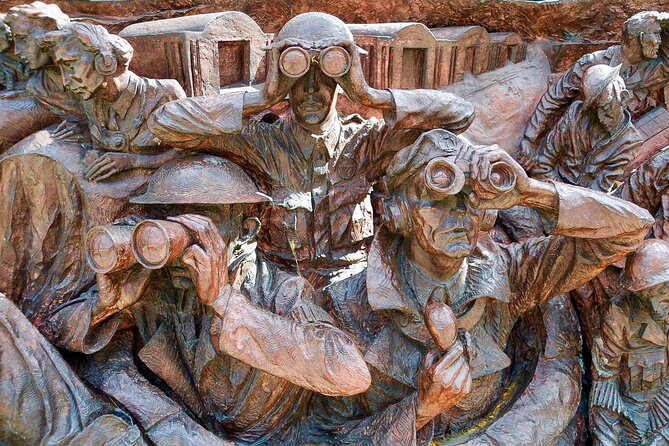 Wartime London is an emotive and unique tour exclusive to Evan Evans. Step back in time and see how the Blitz shaped modern London using an exclusive photo brochure. See evidence of bomb damage on buildings today, surviving signs for life-saving air raid shelters, and the monuments dedicated to our wartime heroes. With radio news broadcasts, sound effects & period music you will uncover an incredible period of history.

INR 5,259
p.p. onwards
Itinerary
This is a typical itinerary for this product

Pass through Whitehall, where along the way you’ll see the statues dedicated to notable Allied figures including Churchill, Eisenhower, Franklin D. Roosevelt and Sir Arthur “Bomber” Harris, as well as several monuments dedicated the Battle of Britain, Women of WWII and the Cenotaph- the site of Britain’s national war memorial.

Pass through Parliament Square en-route to Whitehall, where along the way you’ll see the statues dedicated to notable Allied figures including Churchill, Eisenhower, Franklin D. Roosevelt at Grosvenor Square and Sir Arthur “Bomber” Harris at St. Clement Danes Church, as well as several monuments dedicated the Battle of Britain, Women of WWII and the Cenotaph - the site of Britain’s national war memorial.

Pass by Embankment and see the Battle of Britain Memorial. It was unveiled on 18 September 2005, the 65th anniversary of the Battle, by Prince Charles and Camilla, Duchess of Cornwall.

The core of the monument is a number of scenes, not just of the Battle of Britain itself, but also related topics of both military and ordinary life at that time.

Take a short walk from the Waldorf Hotel to the now disused Strand Station, a former air-raid shelter.

See the building where ‘Operation Overlord’ wad planned, including the Allied landings on D-Day – the largest air, naval and land operation in history.

Pass by Park Lane to see the Animals in War Memorial. The memorial was designed by English sculptor David Backhouse to commemorate the countless animals that have served and died under British military command throughout history. It was unveiled by Princess Anne in 2004.

star star star star star
I have had the oppurtinity by Evan Evans to experience this tour last week. Phil, our tour guide was fantastic. He was very knowledgeable and made it very enjoyable. For those who interestend in the I-II World War.. I can just highly recommend it! Many thanks to Phil and Evan Evans once again!

star star star star star
My wife and I had the privilege of experiencing the WWII wartime London tour guides by Andrew Jackson. Andy was an excellent, knowledgeable and pleasant guide whom I highly recommend...look forward to our next tour with you Andy!
Previous Next
keyboard_arrow_up