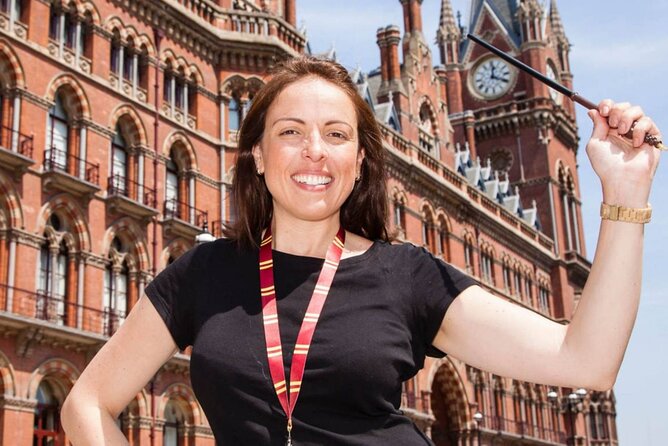 Visit the real-life locations that provided the inspiration for some of the most iconic locations in the wizarding world of the Harry Potter film series. Follow in the footsteps of the world’s most famous wizard on this enchanting half-day, Harry Potter-themed walking tour of London. Visit exciting locations from the film series and discover the inspiration behind the sites, as our expert guide brings the magic to life.

INR 2,185
p.p. onwards
Itinerary
This is a typical itinerary for this product

The Millennium Bridge (a.k.a. ... Potter lovers will know that in Harry Potter and the Half-Blood Prince it is Brockdale Bridge (Not the Millennium Bridge) that is targeted by Death Eaters who are quickly escalating their attacks in the muggle world.

Westminster Tube Station is one of the main locations Harry Potter uses ... attractions including the Houses of Parliament, Westminster Abbey, ...

The Hogwarts Express departs from Platform 9¾ at King’s Cross Station, which is in the arched wall between platforms 4 and 5. If that seems short on magic, head towards the real-life entrance to platforms 9, 10 and 11 on the west side of the station. There you’ll find a trolley disappearing into the magical realm through a wall with the sign: Platform 9¾. You will have the chance to take a picture (complete with a Gryffindor scarf) and to visit the adjacent Harry Potter shop where you can buy merchandise from the books and films.

star star star star star
This tour was so fun! Max was our guide and he did a great job~ very funny and lots of fun facts and photo ops. Max, if you see this, we’d love more travel recommendations 😁😁 email me at emmaklarsen@gmail.com ! 🥳

star star star star star
Our guide, Oliver, kept us all engaged and entertained during this fun and informative walking tour that was a perfect family activity for Potter fans! It was full of interesting information about the Harry Potter movies and iconic London landmarks — and even a few factoids from other films!

star star star star star
Our tour guide Max was stellar. We were part of quite a large afternoon group. Max did a great job of keeping everyone together, through crowded landmark areas and metro systems. Thanks Max for the great tour. The children enjoyed their time.

star star star star star
We knew this would be fun but WOW this was better than we thought! Our tour guide Tom was the absolute BEST! He was so enthusiastic, friendly, knowledgeable, and even looked the part of Harry himself. My kids LOVED this morning and so did my husband and I. You won’t find a better tour or guide - Make sure to ask for Tom!

star star star star star
Roman our guide was very knowledgeable, funny and kept everyone observed in the story of Harry Potter, it was our daughters birthday yesterday and she thoroughly enjoyed it

star star star star star
Great tour of filming locations with a little local flavor added in for good measure. Walk wasn’t too taxing and good for all. Max was enthusiastic and a true delight. Highly recommend.

star star star star star
Oliver was great! Awesome tour, but LOTS of walking! Also be sure you have tube tickets (oyster, contactless payment, etc) before you go. Thank you Oliver!!!

star star star star star
Great tour, even a greater guide. Dynamic, lots of humor and above all, very nice new/additional information about the (making and locations) of Harry Potter movies. Oliver adjusted his guiding almost to every single tour member with great souplesse.

star star star star star
My family of five - including 11, 13, and 17-year-olds - are all big Harry Potter fans and did this tour. Our guide, Oliver, was excellent! He did a great job of mixing Harry Potter filming locations and tidbits with other general history of London information. Very well planned and very entertaining, even for the teens, who can be hard to please! Thank you, Oliver!
Previous Next
keyboard_arrow_up