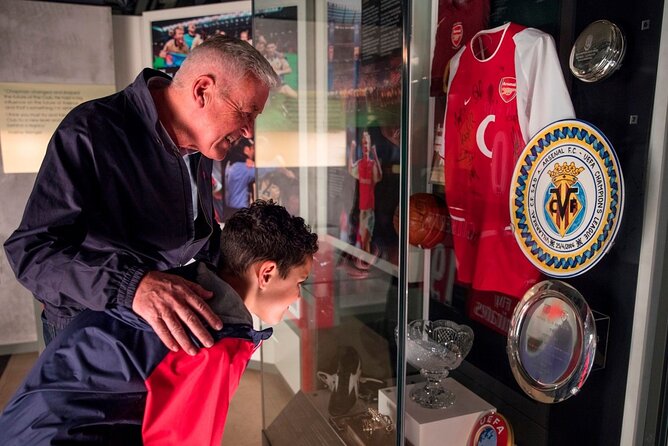 Founded in 1886, Arsenal has a wonderful history from the club’s time at Woolwich, Highbury and Emirates Stadium. The newly refurbished museum offers visitors the chance to take in a number of exciting exhibits. Many of the items on display were kindly donated by former players who hold a special place in Arsenal’s history.

Highlights include Jens Lehmann’s goalkeeper gloves that he wore for every league match of the unbeaten ‘Invincibles’ season in 2003/04, Michael Thomas’ boots from Anfield ’89 and Charlie George’s FA Cup Final shirt from 1971: The museum also features two impressive video theatres and twenty major displays based on Arsenal’s proud history.

Explore behind the scenes at Arsenal Football Club and let a host of Arsenal stars share their matchday experiences with you on a self-guided audio tour of Emirates Stadium. Get ready to take your place in the changing room, walk down the tunnel and hear the roar of 60,000 fans. Tours available in 9 languages: English, Dutch, French, German, Italian, Spanish, Portuguese, Chinese and Japanese

New for summer 2020 - To celebrate Arsenal winning a record-breaking 14th Emirates FA Cup, come and have your photo taken with the famous trophy on an Emirates Stadium Tour

star star star star
I brought my son here as he is a huge Arsenal fan. The stadium is amazing and the tour was very good but just thought it was too overpriced for what you got. Staff were very friendly especially the girl down by the pitch - sorry don't know her name.

star star star star star
Best tour ever, we were visiting from San Diego and the tour exceeded our expectations I highly recommend this tour to any Arsenal fan.

star star star star
Liked it, but wish it had included more live tour guides. There was less access to both people and spaces than the Spurs tour.

star star star star star
Purchased a club level ticket which included stadium tour & museum. Tour was fantastic staff were very friendly & many seemed true fans which really added to the experience! Club level seats at the match was great, seated behind the goals & the bar is very comfortable free drink at half time is the cherry on top! Will definitely return!

star star star star star
Tour is done using hand held audio guides with choice of legend providing audio. Can take tour at your own pace and plenty of staff around to answer questions. Get to visit directors lounge, another lounge, changing rooms, media room, pitch side and opportunity to have photos taken with cups. No pressure to buy the photos

star star star star star
The tour was great, got to see everything what we could ask for. A mention to one of the hospitable staff members Pete, for giving us good insight of the stadium and the process of the pitch maintenance.

star star star star star
Our family visited here today. The staff were friendly and we all loved it! We learnt loads and the audio guide was a great idea as it allowed us to move around at our own pace.

star star star star star
We had a brilliant tour with the Legenderay Charlie George. Charlie charmed us all with his tales of the history of the club and some of his own very funny personal stories. Charlie prsented my son with a top whilst we were in the dressing room, which just capped off the day really. Bigt thanks to the staff at Arsenal, massive thanks to Cagdas, who helped my son out with an ijury he got playing outside the stadium. Would recommend this one folks, superb stadium and topped off by the wonderful Charlie George.