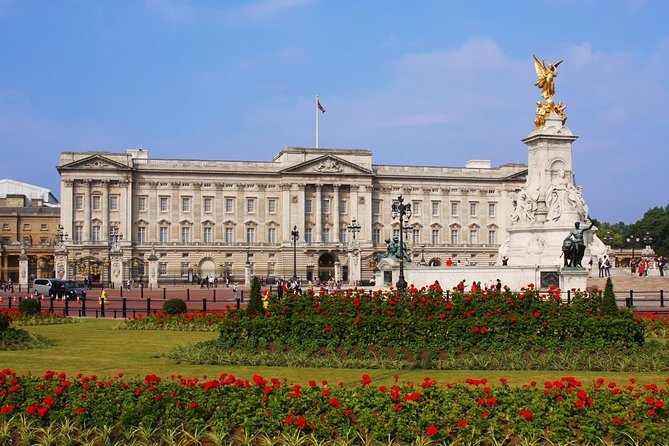 This fantastic half-day tour provides the perfect introduction to London's major landmarks. See the best bits of London in only half a day and learn all about London's history with your Expert Tour Guide. Plus, watch the Changing of the Guards at Buckingham Palace, an event steeped in tradition and ceremony. Enjoy a River Cruise after your guided tour and see the sights of London from a different angle.

INR 3,756
p.p. onwards
Itinerary
This is a typical itinerary for this product

Buckingham Palace has served as the official London residence of the UK's sovereigns since 1837 and today is the administrative headquarters of the Monarch.

Tower Bridge is a combined bascule and suspension bridge in London built between 1886 and 1894. The bridge crosses the River Thames close to the Tower of London and has become an iconic symbol of London.

Kensington Palace is a royal residence set in Kensington Gardens, in the Royal Borough of Kensington and Chelsea in London, England

Trafalgar Square is a public square in the City of Westminster, Central London, built around the area formerly known as Charing Cross. Its name commemorates the Battle of Trafalgar, a British naval victory in the Napoleonic Wars with France and Spain that took place on 21 October 1805 off the coast of Cape Trafalgar.

A royal church in the centre of London offering daily services for all and a World Heritage Site with over a thousand years of history.

The Palace of Westminster is the meeting place of the House of Commons and the House of Lords, the two houses of the Parliament of the United Kingdom.

Changing the Guard – also known as Guard Mounting – is the iconic ceremony which is seen by millions of people each year at Buckingham Palace. If there is no changing of the Guard, we will instead see the Changing of the Horse Guards at Horse Guards Parade.

Parliament Square in Westminster is next to Westminster Abbey and the Houses of Parliament. The square was created in the 1860s and contains statues of well known statesmen including Winston Churchill, Abraham Lincoln and Nelson Mandela.

At the end of our tour, make your way down to Westminster Pier and hop on the next available boat for a scenic cruise down the River Thames. Enjoy a unique view of London and its beautiful waterfront as you head from Westminster Pier to Tower Pier next to the formidable Tower of London.

star
They didn't even wait for 3 mins. We were late as we found it difficult to find Victoria coach place. I had called their office too at 845 am when were running late.

star star star star star
Shelia was an amazing tour guide. I learned so much more than I ever thought I would on this tour. I enjoyed this tour so much. Everything from the organization, cleanliness of the bus, to the abundance of information provided. Well done trip. Thank you Shelia

star star star star star
This was a great tour and we loved our guide Deborah! I only wish we had booked this as an all day tour. We only booked the half day tour. Deborah was knowledgeable and entertaining. She made sure the group had a perfect view of the changing of the guard. Thank you Deborah for a great day!

star star star star star
I had a wonderful day in London with the most wonderful guide ever her name is Norma and I had the driver Steve. The weather was amazing which let me have good pictures. We saw the guard change and our guide made sure we had good spot to watch it from. I even took a picture of the guide and the drive so you now which people you should look for to have a wonderful time with. They give the little extra that makes the time fly away. If you want an amazing guide ask for Norma or you will miss out on a wonderful experience. She has alot of knowledge and she knows what she is talking about. Thank you again for a wonderful time.

star star star star star
I am not sure I have this under the correct Evan Evans activity above, as I thought it was something like "London in a day with evening Thames river cruise". In any event, it was wonderful. August 20th, 2018 Tour Number 4. Here is my review.... I will start by saying this is the tour you want, especially if you can request the tour guide Rodney. In fact, find out when Rodney is working and book that tour! My wife located this tour on the internet from past reviews, and did she ever score a great tour for us. We did the “London in One Day Tour” with the evening Thames River cruise. It was perfect for us, with the bus touring of most of the sites newcomers like us want to see. The tour leaves from the lovely Art Deco Victoria Coach Station, itself worth seeing. We saw the Royal Albert Hall*, Westminster Abbey, Buckingham Palace* (and the guard change), Green Park*, Trafalgar Square*, Parliament (with the clock tower containing Big Ben), Piccadilly Circus, St. Paul’s Cathedral*, Harrod’s, The Tower of London* and so much more. The * means we actually got out to view this location. Now for the seriously good part – we had as our guide a fine gentleman named Rodney. (August 20th 2018 Tour Number 4). Rodney is an extremely polished Londoner that sounds like a BBC news announcer. He is brilliant, and has a very dry, fun wit. I never stumped him with a question. He KNOWS London. He also strikes the correct balance of the right amount of talking, without babbling on. I heard other guides go by…..you want Rodney. Make the effort to book with him, and you can thank me later. Whoever hires and fires, give this man a raise and keep him. Our driver Joe was incredible. He threaded the big red coach through holes I would swear a Mini Cooper couldn’t fit. He and Rodney worked well together to adjust the tour on the fly due to traffic jams in London streets. The really amazing feat was seeing Joe parallel park the coach in one smooth move into a space in Trafalgar Square little longer than the coach’s length. Simply amazing. The evening river cruise left from the London Eye dock, and was very enjoyable and gives a perspective most will never see. Wonderful sunset over St Paul’s Cathedral dome. The announcer was very funny. It is well worth your time and effort for this relaxing float on the Thames. Again, I cannot say enough about Rodney and the tour in general. Make sure and book one of Rodney’s days, and enjoy. It was a top highlight of our trip to England.

Not a big fan of this tour. it's super basic because you get the same information as if you were to get one of those 2 day tour buses but at half the price and twice the amount of time. And the time spent at the changing of the guard was barely 15 minutes, when the whole ceremony lasts 1.5 hours. Also, the guide placed us all the way to the back of the area, where we weren't able to see anything of the actual ceremony, only a few guards that passed by the street on their way in to the main plaza. And the cruise, the bus leaves you about 5 blocks from where you are supposed to get the boat. So i wouldn't recommend this to anyone. you are better off getting a Big Bus pass or any of those tour buses, and walking yourself early to Buckingham Palace to see the change of guard and place yourself at the front.

That day was raining, but we didnt mind because we were overwhelmed in the changing of the guard. I love to live in this country. Beautiful!!!