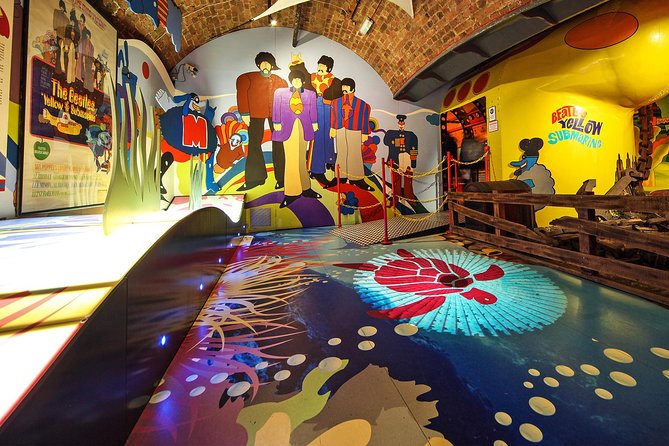 Penny Lane, Strawberry Fields - visit these famous Liverpool sights your own way on an independent day trip from London. Everything's arranged for you: return rail tickets, entry to the Beatles Story, a Magical Mystery Tour and a Liverpool city map and information booklet. The rest is up to you!

INR 14,162
p.p. onwards
Itinerary
This is a typical itinerary for this product

The Royal Albert Dock is a complex of dock buildings and warehouses in Liverpool, England. Designed by Jesse Hartley and Philip Hardwick, it was opened in 1846, and was the first structure in Britain to be built from cast iron, brick and stone, with no structural wood.

Entry to the award winning The Beatles Story is included in your Liverpool experience - the world's largest permanent exhibition purely devoted to the lives and times of The Beatles.

The Merseyside Maritime Museum is a museum based in the city of Liverpool, Merseyside, England, UK. It is part of National Museums Liverpool and an Anchor Point of ERIH, The European Route of Industrial Heritage.

Step aboard the 'Magical Mystery Tour’ – a recreation of the colourful bus used in the 1967 film of the same name. This fun and fascinating tour takes in the city's most iconic Beatles locations with live commentary and on-board soundtrack it is waiting to take you away.

Visit the locations that shaped the band and provided the inspiration for some of their greatest hits. See where John, Paul, Ringo and George grew up and their childhood homes, schools and colleges, and visit Penny Lane, Strawberry Field and many more famous locations.

Finish your tour at the legendary Cavern Club on Mathew Street where The Beatles played 292 times over a two and a half year period.

Site of a former Salvation Army children's home & the inspiration for the famous Beatles song.

Penny Lane was of course made famous by The Beatles song of that name, released in 1967. John Lennon and Paul McCartney used to meet at Penny Lane to catch a bus into town. Their shared childhood experiences on the street inspired them to write the song, which was released as a double ‘A’ side with ‘Strawberry Fields Forever’ and later featured on the US album ‘Magical Mystery Tour.’

Many Beatles fans make pilgrimage to Penny Lane in the South of the city, to see the street. It’s still a lively area, with independent businesses lining the street. There’s even a barber’s shop in the same spot referenced in the song.

“Almost certainly the most important meeting in popular music history” is how the first meeting of John Lennon and Paul McCartney has recently been described. The meeting took place at St Peter’s Church Hall on the evening of Saturday, 6th July 1957… Whilst waiting to play at the church dance that night, John Lennon and the other members of the Quarrymen Skiffle Group were introduced to the young Paul McCartney by a mutual friend.

The Cavern Club opened on 16 January 1957 as a jazz club, later becoming a centre of the rock and roll scene in Liverpool in the 1960s. The Beatles played at the club in their early years.

star star star
I was very disappointed in the service provided compared to the price I paid. I from the USA, and not familiar with Liverpool or London. I paid $800+ and thinking there would be people to provide guidance in support at the train station (both departing and arriving). We did not know where to go after departing the train at the stayed destination. The map provided was much to small for engine to see, much less read. This excursion got off to a very round and disappointing start. I found the attractions to be interesting and worthwhile. I strongly believe that a partial refund for the extremely poor service is in order.

star
The most memorable was the fact that for us to get there we had to pay a second time to make our ride by subway to Liverpool, then we had another (man and wife) who vouched for us that we belong on the trip as we had to show paperwork to get in. Fortunately, our name was listed, and we were able to complete trip, however seeing how we had already paid in advance we believe that you should re-pay us for the money we sent you in advance! Do the right thing and refund us, if not I will never stop sending warnings out to anyone how you cheated us !!!

star star star
We loved The Beatles Story and the Magical Mystery Tour. Our problem was the excessive free time between both of these events. Because of this, we did not get to see what both my husband and I were looking forward to the most .. The Cavern Club, because we had to catch the train back to London. I yhink you have to redistribute the free time at the end of the tour rather than in the middle. We believe we should get some kind of refund.

star star star
Our Magical Mystery Tour guide ( forgot his name, but his son, Jude, was with us), so Jude's dad, was excellent. He added personal magic, and was quite entertaining. We boarded the bus to the song Magical Mystery Tour, and then traveled down Penny Lane with the song playing. The Beatles Story was better than I expected, and I think it was done very well. My time in Liverpool was great!

star
Do not book this! The vendor did not send the information as they should have and viator would not issue a refund. Horrible customer service on this one.

star
It was a nightmare , missed the Beatle experience because I couldn’t print my tickets due to Wi Fi issues so print them out before trip, also you don’t get enough time to do everything listed Cavern was having a private party we couldn’t enter , couldn’t wait we would miss the train back to London, waste of time and money