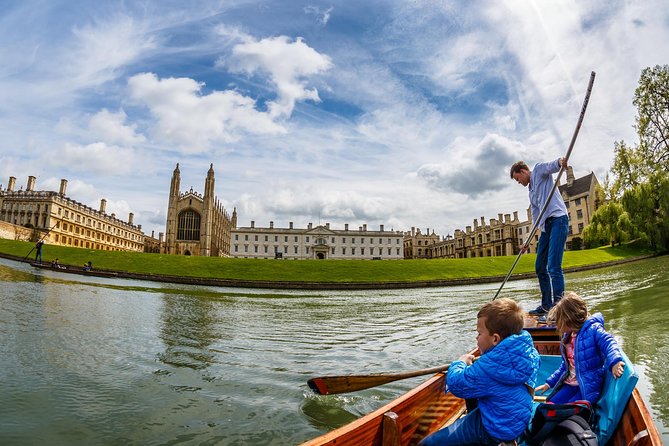 Begin the day traveling across the Chiltern Hills to Oxford, the "City of Dreaming Spires", whose hushed courtyards and elegant, dignified timeworn buildings have inspired generations of scholars (including Bill Clinton in the 1970s) and writers, including Lewis Carroll who wrote "Alice in Wonderland" here.

INR 5,187
p.p. onwards
Itinerary
This is a typical itinerary for this product

Our fantastic full-day trip to Cambridge and Oxford begins in Oxford, also known as The City of Dreaming Spires. Find out why as you enjoy a walking tour of the city with your expert tour guide, who will bring the history of this beautiful city to life.

Oxford is, of course, also home to the University of Oxford, the oldest University in the English-speaking world with origins dating back to the 11th century.

In Christ Church college, you will be visiting one of the University's most prestigious colleges. Founded by Henry VIII in 1532, Christ Church also functions as the UK's smallest cathedral.

Its beautiful architecture has seen it featured in movies such as Harry Potter and The Golden Compass, while it has also inspired replicas around the world. The famous dining hall, for example, has been reproduced in Cornell University & the University of Chicago.

Founded in 1209, it is the second oldest university in the English-speaking world. Learn about the history and origins of the university, which was founded, ironically, by a group of rebel Oxford Scholars.

Situated next to the River Cam lies King's College, a stunningly beautiful example of medieval Gothic architecture. Founded by Henry VI in 1441, its fan vault ceiling is the largest in the world. Walk in the footsteps of famous alumni that include Alan Turing - the brilliant WW2 codebreaker - Oliver Cromwell and Charles Darwin.

Construction on the college chapel began in 1446 and took almost 70 years to complete. Today, it is home to a world-famous choir that broadcasts to millions of listeners all over the globe every year on Christmas Eve.

A city renowned for its unique, ornate buildings and culture, Cambridge is a historic city full of character. You'll see the best that Cambridge has to offer on a walking tour of the city with your expert guide.

The River Cam (/ˈkæm/) is the main river flowing through Cambridge in eastern England. After leaving Cambridge, it flows north and east into the Great Ouse to the south of Ely at Pope's Corner. The Great Ouse connects the Cam to the North Sea at King's Lynn: The total distance from Cambridge to the sea is about 40 mi (64 km) and is navigable for punts, small boats, and rowing craft.

The Bridge of Sighs in Cambridge, England is a covered bridge at St John's College, Cambridge University. It was built in 1831 and crosses the River Cam between the college's Third Court and New Court. The architect was Henry Hutchinson.

star star star star star
Wonderful tour of both Universities. Manon, our tour guide, was excellent. She was knowledgeable, humorous and answered all questions we asked her. If you can score a tour with her, I guarantee you’ll enjoy it.

star star star star star
The tour was fantastic and worth every penny. The tour guide Manon was funny, knowledgeable, friendly and helpful. She provided a interesting insights to the sites. She went out of the way to ensure that the tourists got the best experience.

star star star star star
Manon is a really good tour guide and very helpful. She has a very good knowledge of both Oxford and Cambridge. Really enjoyed your company 🙂 Thanks Manon and Bill.

star
This was absolutely the worst tour Viator has ever put me through and I’ve been on over 20 various Viator tours. Everything from the coach, the driver, the radio equipment and the tour guide was a complete waste. The Driver was uncaring and less than accommodating. The coach WiFi was inoperable and “Nobody knew” how to turn it on. I was on the very same coach 2 days earlier and everything worked fine. The radio equipment for the walking tours didn’t work properly. The tour guide was friendly but offered very little information and seemed not to care that we couldn’t hear anything she was saying. . She walked so fast during what little guided tour we had that the group was strung out, lost and Ill-informed of what we were seeing. I felt lost and disappointed as did many of the other tourists on this trip.

star star
Our coach was one hour and half late. The travel time is much more than the visits time on both campuses. We were rushed in both places.

star star
We started 15 mins late from the scheduled departure(9.00 am) from London at 9.15 am and reached Cambridge at 11.15 am. Started the walking tour of Cambridge at around 11.30 am. The guide spent 45 mins with us telling the history in bits and peices. She then left us at 12.15 pm to explore the city on our own for rest of the time and asked us to return to the coach by 1.20 pm. We were also asked to have lunch during the same time which essentially meant we can either explore the city or have lunch. We left Cambridge at 1.25 pm and reached Oxford at 3.30 pm. The guide again spent just 30 mins explaining few details of different colleges and left us at 4.15 pm to explore the city on our own. We were asked to return back to the coach by 5.15 pm. Again you have the option to either have some snacks or explore the city. We departed from Oxford at 5.25 pm and reached London at 7.15 pm. The reason I opted for a guided walking tour was to get a good understanding of the history of both the universities and the important colleges from these universities. But I felt the guide was either not interested or didn't have much knowledge. Also I think the tour could have been managed more efficiently. Most of other tour operators depart from London at 8.15 am. This would give us more time in both the cities.

star star star star star
A delightful way to relax and get the insiders, outside tour of Cambridge’s historic schools. Check out the behind the college buzz on Cambridge’s party school. It’s wooden handrail etching designed to help drunken party goers find their way home. Also the home of England’s only living banana tree. Plastic rapped in the colder months for protection of the tree and its inedible fruit.

star star star star star
Visited Oxford and Cambridge with Evan Evans Tours on September 14, 2019 with our driver Abbey and our excellent guide Chris. The coach was very comfortable and driven expertly and safely by Abbey. Chris, our guide, was a fount of information and expertly guided us through the sites while also filling us with facts about British culture and history. I highly recommend this tour to you.

star star star star
Evans and Evans tour took us to both Cambridge and Oxford as a long day trip. It does take 2 hours on the bus to get from London to Cambridge and then another 2 hours from Cambridge to Oxford and then 2 hours home again. YOu can do the math and realise that time in each town only gives you a flavour of the amazing history of these places. All the main sites were covered and good tips about where to get souvenirs were given. If you have time I would pick one university town to do a more thorough visit, but as the highlights were so amazing eg Christchurch College Oxford, I thought the trip well worth it The famous Bridge of Sighs, patterned after the real one in Italy. Inside the Christ Church The river, bridge and boats in Bath The streets of Oxford in Cambridge, after visiting King's College Chapel which was beautiful! One of colleges at Cambridge The Bodleian Library at Oxford University. We weren't allowed inside, but interior shots were used in several of the Harry Potter movies. This is the Mathematical Bridge at Cambridge University.