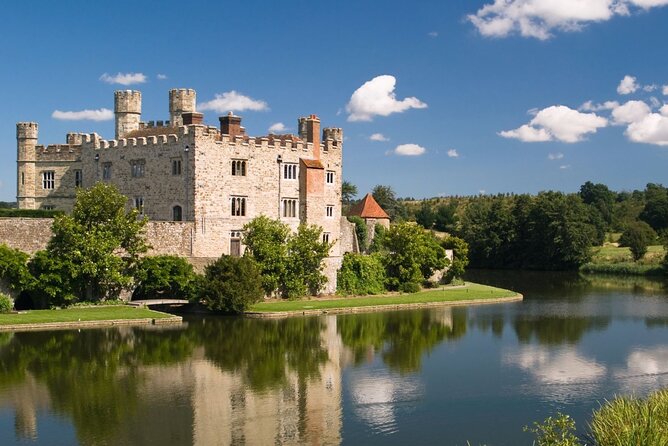 Escape the hustle-bustle of London for a day and travel to the English countryside for a tour of Leeds Castle, Canterbury Cathedral and Dover. Enjoy a private viewing of beautiful Leeds Castle before the doors open to the public, get an exclusive tour inside UNESCO World Heritage–listed Canterbury Cathedral, and admire the symbolic White Cliffs of Dover. Listen to your guide's expert commentary throughout the day through your personal headphones.

INR 7,802
p.p. onwards
Itinerary
This is a typical itinerary for this product

Located in Kent, ‘The Garden of England’, lies Leeds Castle, a beautiful medieval castle frequently referred to as ‘the loveliest castle in the world’. With 500 acres of landscaped parkland to explore and impeccably maintained gardens to enjoy, it’s easy to see why this beautiful castle was a favoured castle of King Henry VIII, who gifted it to his first wife, Catherine of Aragon.

In its 900-year history, the castle has been home to no fewer than six queens and served many functions, including acting as a garrison, prison and the stately private home of its most recent owners. Learn all about this and more as our expert tour guide brings its fascinating story to life.

A designated UNESCO World Heritage Site, Canterbury Cathedral is both a serene place of holiness and beautiful tourist destination. As the Cathedral of the Archbishop, the spiritual leader of the Church of England, Canterbury holds a special place in British history. No ordinary Cathedral, Canterbury has a long history that is often described as ‘England in Stone’; from the role of its Archbishops in the Magna Carta to the murder of Thomas Becket after a power struggle with the King of England, Canterbury’s history is intertwined with that of England. Founded by St Augustine in 600 AD, the Cathedral today is one of the finest examples of Gothic architecture in England, and the first building in the country to be redesigned in this popular style in 1774.

Soaring 350ft above the crashing waves of the English Channel, the White Cliffs of Dover are an instantly recognisable landmark of Britain. From Caesar to Shakespeare, some of history’s most important figures recognised the towering symbolism of the cliffs. Traditionally the site where British royalty would welcome overseas visitors, the cliffs served as an intimidating reminder of Britain's immovable resoluteness sense of independence.

Dover Castle is a medieval castle in Dover, Kent, England. It was founded in the 11th century and has been described as the "Key to England" due to its defensive significance throughout history. It is the largest castle in England.

star star star star star
Awesome tour. Highly knowledgeable guide and Driver. Lots of history and architecture that was eye opening. Long drive to and from the three locations.

star star star star
Overall, this was a great tour. The guide, Monica, shared lots of interesting info and history which really added to the experience. However, if the tour used the full time as advertised (we got back to London at 6, not 7pm as booking stated) and had allowed more free time in Canterbury, this would have added so much more to the trip. It is such a lovely city but you can barely see anything with only an hour for free time/lunch. Dover was very underwhelming and a waste of time.

star star star star star
Leslie was a great tour guide who made all mobility levels and interest levels feel comfortable about the tour. Some wanted to rush ahead and others wanted to take more time. She checked in after the stops on how things went.

star star star star star
Amazing sights and wonderful guide Chris made this day a perfection. Gorgeous Leeds castle 🏰 with marvellous gardens and a maze, Canterbury Cathedral with its intriguing history and breathtaking architecture and interior, as well as the beech of Dover with a splendid view on White cliffs and castle exceeded my expectations. Leeds Castle from the opposite bank