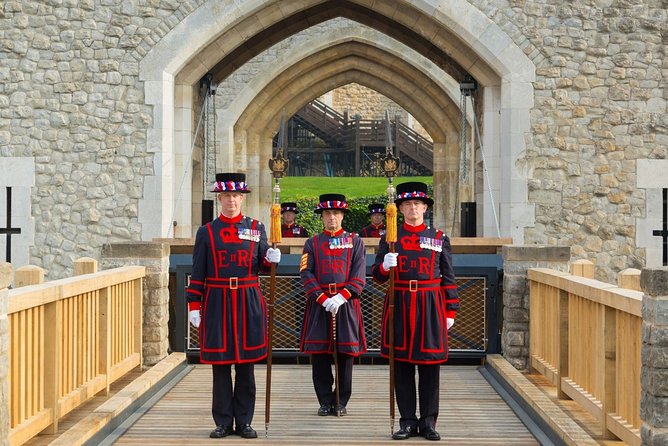 See the best of London in an afternoon, with a visit to the Tower of London and a city tour including St Paul's Cathedral. The tour also includes a ticket for a sightseeing cruise from the Tower of London to Westminster Pier, to be used after your tour or another time.

INR 6,699
p.p. onwards
Itinerary
This is a typical itinerary for this product

The scene of Britain’s most dramatic and fascinating history spanning over an impressive 1,000 years. Hear tales of imprisonment and execution; discover the famous Crown Jewels and learn about the wild animals that resided here for 600 years.

Discover the breath-taking interior and fascinating history of this magnificent masterpiece, dating back to 1673. Explore Europe’s largest crypt and the tombs of some of the nation’s greatest heroes and experience the spectacular views of London from the Golden Gallery.

From the Tower of London, hop aboard a Thames River Cruise to Westminster Pier.

Mansion House is the official residence of the Lord Mayor of London. It is a Grade I listed building. It is used for some of the City of London's official functions, including two annual white tie dinners.

Tower Bridge is a combined bascule and suspension bridge in London, built between 1886 and 1894. The bridge crosses the River Thames close to the Tower of London and has become an iconic symbol of London.

The View from The Shard is a tourist attraction based in London's tallest building, The Shard. The attraction offers visitors views from the skyscraper, with two viewing platforms inside the building.

star star star star star
Our tour guide Godfrey and driver Raphael were amazing. They were helpful and very very knowledgeable!! They both have made this experience very memorable for my daughter and I.

star star star star star
Deborah (our tour guide) made the tour an unforgettable experience. She was significantly informed, deadly humorous, greatly energetic and very kind. We recommend this tour to anyone who wants to have a great London experience in a single day. Thank you Debbie!!

star
Worst tour and tour company ever. (Evan Evans Tours in London) Left late, Sat in traffic for almost two hours. Was literally rushed through the cathedral and had to miss the Tower of London due to the delay. Requested a refund and was told the tour ran as scheduled. That's an absolute lie. I do not recommend this company to anyone. Wats if an afternoon and money. Do not book with Evan Evans Tours.

star star star star star
Seeing St Paul’s cathedral was breathtaking. The art work inside was exquisite and our tour guide, Lesley, knew so much about it. The tower of london was also fascinating with interesting tidbits

star star star star star
We loved this tour!!! It was fun and so informative. We were told so many interesting things just on our way to each exciting location. I could have just sat on the bus and listened all day. We were able to see the changing of the guards in the perfect area. Godfrey was amazing!!! He always knew just the right spots and loads of info on each stop. If you go on this tour ask for Godfrey! You will love it!

star star star star
The sites were great. Our guide was knowledgeable and pleasant. We didn’t do the boat tour on the day of the tour. It’s nice that you can do it on another day. Traffic made the experience shorter and less enjoyable.

star star star star star
Very insightful tour at a comfortable pace, our guide Sheila was very knowledgeable and kept up an intriguing commentary throughout the journey.

star
Overbooked tour, no seats for everyone people standing in the stairwell. The tour guide allowed people to save seats before boarding so that when general boarding happened there were hardly any seats available. The bus was not turned on and there was no air and it was clear that this was gonna be a completely disorganized trip. I got off of the bus because I wasn’t willing to be stuck in chaos all day.

star star star star star
Leslie was great! Very informative and easy to follow. This tour gave you enough time to see everything and did not feel rushed at all Big Ben is the bell behind the clock. did not do this, but it is pretty No pics of the Jewels just the entrance. The tour group at the Tower of London One of the guards Ready for the Olympics! My husband and me from the Tower of London!