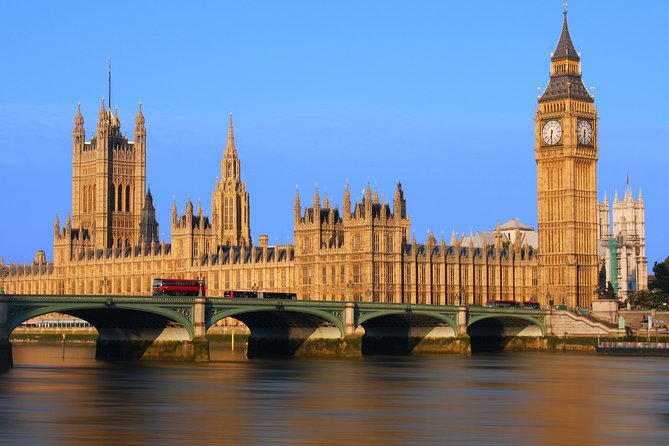 Royal London Tour with Changing of the Guard

This Royal Tour of London takes in many of the royal highlights of London, including Westminster Abbey where Prince William and Kate Middleton, where married on April 29, 2011. Finally, you will experience the famous Changing of the Guard ceremony outside Buckingham Palace, then spend the afternoon exploring London at your leisure.

The Abbey has been the coronation church since 1066, and is the final resting place of 17 monarchs. The church we see today was begun by Henry III in 1245. It’s one of the most important Gothic buildings in the country, and has the medieval shrine of an Anglo-Saxon saint at its heart.

Parliament is made up of the House of Commons and House of Lords. It is responsible for making laws, deciding taxes and scrutinising the Government.

St James’s Park includes The Mall and Horse Guards Parade, and is surrounded by landmarks such as Buckingham Palace, Clarence House and Whitehall.

Buckingham Palace has served as the official London residence of the UK's sovereigns since 1837 and today is the administrative headquarters of the Monarch.

The epitome of British pomp and military ceremony for which Britain is famous around the world. Elite soldiers from the military have been dutifully guarding the Monarch since 1660. The 7 regiments that guard the monarch, known as the 'Household Division', are so devoted to their duty that they will famously not acknowledge or allow themselves to be distracted by the public.

During the ceremony, immaculately turned out guards are accompanied by marching bands playing a rousing mix of military music, whose origins dates back to the morale-boosting songs played before the British military went into battle.

Trafalgar Square is a public square in the City of Westminster, Central London, built around the area formerly known as Charing Cross. Its name commemorates the Battle of Trafalgar, a British naval victory in the Napoleonic Wars with France and Spain that took place on 21 October 1805 off the coast of Cape Trafalgar.

star star star star star
Our family of four (two teens) did the London in a day. We only had three days in London and wanted to pack in as much as we could. Norma was our tour guide. She was excellent and kept up interested. This was perfect for us since we didn't have enough scheduled time in London to do all of these things in a more relaxed way. We appreciated how she did her best to make The Changing of the Guard experience interesting, despite the fact that Buckingham Palace is blocked due to Jubilee preparation. My only complaint is that the bus did not have wifi. We were told when we booked that wifi would be available. This was a disappointment.

star star star star star
Our tour guide Norma was very pleasant and knowledgeable. We really enjoyed all of the attractions we were able to see in a single day. Highly recommend this day tour - especially those with only a few days in London. Very worth it!

star star star
We took the 3 hr tour where we expected to hear relevant commentary regarding the ‘Royal’ places listed for the tour. We acknowledge that we saw a number of ‘Royal’ areas/palaces etc however our guide Anthony was too busy talking about himself that a number of known significant places were missed e.g. the V&A! His unedited, disrespectful, sexist, racist commentary meant that any positive aspects of the tour were overwhelmed by his behaviour to the point where we removed our earpieces when we were outside; we were denied such a luxury when captive in the bus. We would recommend the Tour however some performance review of this Guide’s presentation should be undertaken otherwise I’m sure further negative comments will follow. We have travelled a lot particularly over the last 5 weeks in Norway, Scotland & now England & Anthony (ex military, Oxford Classics degree, US history writer - we could buy his book he suggested) has been our one & only poor Guide experience. It was a shame as London is a wonderful historic city; the majority of history we heard was personal, Anthony’s!

star
Tour was for Sunday August 4th and there was a 100km bike race (Prudential Bike Race) which has happened every year since 2012 so it obviously is a 'known' factor. Streets and bridges were closed and we were unable to do the tour as planned but not informed ahead of time. I even called on Saturday the 3rd to see if it was still on and woman on the phone confirmed all was ok. No changing of the guards or horse parade, no Big Ben, Westminster or Parliament. They took us to Kensington Palace (just walked around the gardens a bit) and then drove near Buckingham Palace - we walked to the front and took pictures and that was it. As we had done our own Kensington Palace tour the day before (inside and out) it was a total waste. Tour guide told us he had advised tour company to email everyone a week before that tour would be different but we received no notice. Requesting a full refund of our monies.

star star star
The driver and guide were courteous & professional. The guide had some fun stories about hotels and buildings we drove past. He would answer questions. The disappointment began when the bus arrived late and we had to chase the changing of the guard parade. When we caught up, we stood far away on the street watching the marching of the guard (new guard in, old guard out). We were not taken to view the changing of the guard ceremony in the courtyard. In fact, during the actual Changing Ceremony, we were told that not much was going on and it was suggested, if needed, use the toilets. There was little attempt to explain the true history and pageantry of the guard ceremony or share “insider knowledge” to explain what was happening and why. While we did somewhat enjoy viewing the “marching guard, from a distance” – but this fell short of expectations.

star star star
Including this one, We have had 3 tours up until this point and out of all of them, this was the most boring. Really did not learn a whole lot from the guide. Difficult to see or take pictures. Luckily we were able to get off bus twice to take pictures but felt rushed. Not very engaging or interactive with the guests. There were issues with the device used to listen to guide and the guide was not as friendly as expected when asking for replacement. Guide did offer coins for restroom use at Changing of Guard Ceremony. Guide definitely knew the excellent locations to stand to watch Changing of the Guard Ceremony. Just wish we had arrived sooner. Check in was easy but signage outside of Victoria Station needs to be more clear. Guide was difficult to locate in crowd due to fact the guide used black umbrella which many others were carrying. Compared to the other tours; would not recommend.

star star star star
We found the guide for the half day tour to be exceptional. Gave us a good overall view of London at the start of our holiday. Opening of Parliament and the Queen's speech on May 25, 2010. This carriage has members of the royal family. The memorial was painted black during WWII and stayed that way until a few years ago when it was cleaned up to show off its gold lilt. The last stop for half day tour was in Trafalgar Square. This Stop was near by Big Ben The Queen in her carriage on the way to Parliament for her speech to introduce her new government. One of the bands of the Royal Guard performing at the Palace awaiting the Queen's return from Parliament.
Previous Next
keyboard_arrow_up