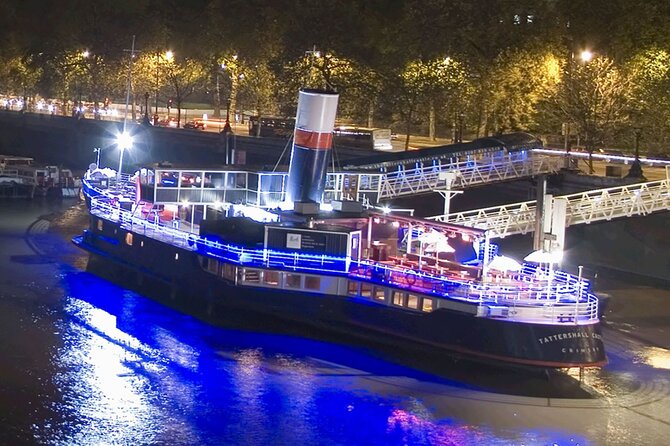 Comedy Night on The River Thames

We are London's finest floating comedy club on the River Thames, with great views of The London Eye, Big Ben and the Houses Of Parliament.

Our venue The Tattershall Castle has a floating beer garden on the top deck, restaurant and an intimate air conditioned room perfect for comedy.

We have been running shows for 22 years and hold a TripAdvisor Travellers' Choice Award.

We pride ourselves on customer service with allocated seating so you can enjoy the show with friends and love to help celebrate special occasions such as birthdays.

Comedy Night on The River Thames

London's Finest Floating Comedy Club, join us at The Tattershall Castle for laughs while floating on the Thames!

Enjoy spectacular views of London before the show in London’s floating beer garden, before enjoying top class comedy followed by Nightclub until 2am.

Each show is packed with the TV faces, the best of the UK comedy circuit and rising stars, all brought to you by our team with 22 years experience of making unforgettable nights out.

Doors open at 7pm, The show starts at 8pm. We strongly recommend arriving before 7.30pm to get seated and get a drink before the show.

After the show the Boat Show Comedy Club turns into a nightclub until 2am with free entry for customers.

'Guaranteed to book the best' The Sunday Times

'Glitzier than your average night of stand-up' The Evening Standard

star star star star star
This was our first time coming here and all I can say is what a great night!!!! The venue is brilliant and so easy to get to …the comedy show was absolutely brilliant, the acts were all top class, the material was diverse and current and had everyone laughing. We had such good seats and all the staff that worked on the event were so helpful and friendly…I it’s such great value for money too! After the show you have the upstairs terrace bar with DJ, couldn’t wish for a better night out! Highly recommend & can’t wait to come back

star star star star star
We booked it not really knowing what would await us. It was a great experience, fun crowd, cozy setting and great performers on stage. Special thanks go out to Paul for showing great care and moving us to the front row!

star star star star star
Honestly, it was bloody brilliant. Every act had us laughing. Such a nice vibe, the staff were amazing, so welcoming! And Jack was on had for anything lovely man. Alexander the MC was honestly brilliant. If we’re in London again we will come back and I would recommend to anyone. Easy to find, nice location, beautiful view of the London eye.

star star star star star
We booked the meal and comedy show (and night club) for the four of us for a belated birthday celebration. The communication and hosting from the Jack and the comedy club was superb. The restaurant didn't seem to have our reservation on their list, but were happy to accept it having looked at the tickets/QR code to confirm. The food was good both in terms of potion size and quality. We went during a mini-heatwave, and it was disappointing that the restaurant area didn't have air con (although the comedy club section thankfully did). Overall, it's a great venue, very conveniently located and the staff were all very friendly and helpful (even helping one of our group find us when we'd told her we were in the "crow's nest" lol!). The compere and the comedians were absolutely superb, my cheeks were hurting by the end of the evening. It was nicely timed with intervals for cigarette and toilet breaks. It was a work night for us, so we didn't stay for the club, but the music playing upstairs as we were leaving was great! Highly recommend this fun and affordable night our.

star star star star star
My group of 16 had a great time at this venue for my birthday celebrations. The venue is full of character and the view is breathtaking, overlooking the London eye, Big Ben and many other areas of interest, from a unique perspective of being on a boat. The boat has a gentle sway which only adds to the charm. Jack helped me and my group organise and dropped me a courtesy call the day before which was a nice touch. He even got the staff and the acts to sign a birthday card for me which was a class act. Can’t wait for my next birthday at this rate 😊

star star star star star
Great fun! I went for a date, and found lots of laughs, with a great, intimate atmosphere, and not forgetting the eccentricity of being on a boat. The comedians were all brilliant. Would recommend!

star star star star star
Had a brilliant night here . Comedy acts were so good I was doubled over with laughter. But also the staff are just so friendly and helpful truly a great spot for a night out !
Previous Next
keyboard_arrow_up