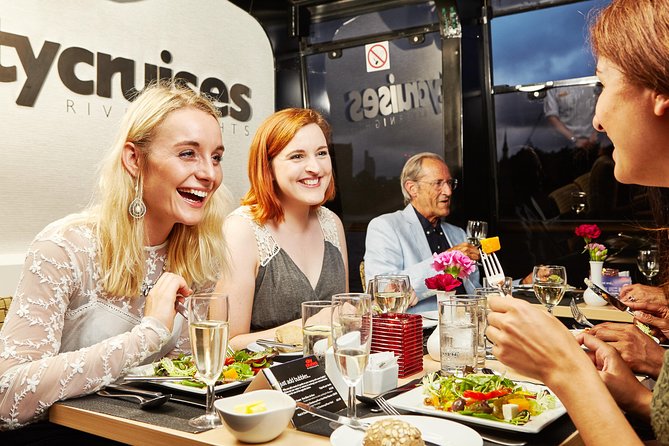 The London Dinner Cruise on the Thames River

Enjoy a evening of food, wine and entertainment as you cruise down the River Thames. Glide past some of London's most spectacular landmarks including the Houses of Parliament, St. Paul's Cathedral and Tower Bridge, as you cruise from the center of London to the Thames River barrier and back.

Platinum Jubilee Champagne Gala Dinner Cruise (2-5th June 2022):
Celebrate The Queen's Platinum Jubilee and take in majestic views of London’s famous riverside landmarks bathed in the summer evening light as you cruise along The Thames. With a glass of champagne in hand, relax and enjoy a bespoke commentary exploring the city’s royal history and delivered by an expert guide.

The London Dinner Cruise on the Thames River 19:45

INR 6,166
p.p. onwards
Itinerary
This is a typical itinerary for this product

Board at Westminster Pier, please arrive 20 minutes before your scheduled departure time

Sail past Shakespeares Globe Theatre. The Elizabethan playhouse located on the south bank of the River Thames.

Board and depart the boat opposite Sea Life, an Oceanic exhibit for all ages

Sail past the permanently moored former battleship, which is now a floating Royal Naval Museum.

star
We arrived an hour early to find the embankment gate in the directions closed. The area was dark, there was no signage, it was pouring rain and there was no one to ask for help. We tried calling the tour guide number twice with no answer. We never found the boat so we spent $40 dollars in two cab rides to get there and back for no nothing. I will be calling customer service for a refund when we return from our trip. Very disappointed.

star star star star star
Just arrived in London and went on this cruise straight from the airport due to late plane They were so gracious to take the luggage. I was hungry and the meal did not disappoint. Excellent service, friendly staff and wonderful entertainment. Highly recommend!

star
Hurricane in Us disrupted our plans. Tried to rebook for 10/03. Got no response. Not ther fault but the no response was

star star
Mixed emotions here. The onboard entertainment was very talented, but the volume was so loud you could not talk to the person next to you. She could sing so well, but it was just too loud. We had to ask several times for something to drink. The food is ok. The total cruise could have been shorter-for about 30 + minutes; we didn't move. You get fantastic shots of Tower Bridge and the City of London that I don't think you could get without being on board.

star star
The views were lovely. Dinner was pretty good. Service was ok. Didn’t care for how loud the music was. It was hard to have a conversation in our group.

star star star star star
The three of us thoroughly enjoyed the evening with good food and dancing along to the female singer who entertained us all. Thames at night was lovely to see too. Looks great lit up at night, shame about the rain Taken at the end of the cruise Cruising down the thames It looks so different lit up at night. It was a wonderful dinner cruise!!!! Amazing to see from the boat!!!! Can't get enough of the view!!!