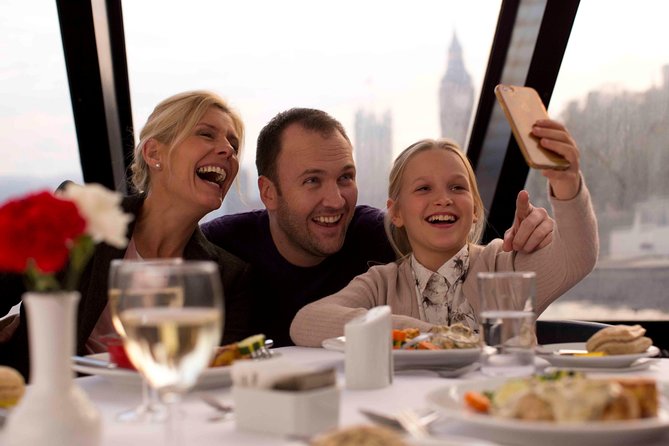 Combine London’s waterfront sights with a 2-course lunch during a 1.5-hour Thames River sightseeing cruise! While cruising between Tower Pier and Westminster, savor a 2-course lunch with tea or coffee and admire views of London landmarks from the water. Look out for the Shard, the London Eye, Big Ben and more, and purchase drinks from the onboard bar, if you wish.

Head towards Westminster and take the opportunity to head to the upper deck to take a picture of Houses of Parliament.

board at at Tower Pier, please arrive 20 minutes before the departure time

Sail past the permanently moored former battleship, which is now a floating Royal Naval Museum.

star star star star star
We did enjoy the cruise very much!👏👍However we wish that we could have our own choice of the food. Anyway it was a good experience, we will definitely recommend this to our friends.

star star star star star
We celebrated our 50th birthdays yesterday, good was lovely, accommodating for my diary intolerance. Lovely bottle of Prosecco too. The tour guide was very informative. Great few hours and will be doing it again x

star star star star star
This was an excellent experience. I can be very critical but this was faultless: the organisation was clear and good, the staff friendly and efficient and the food delicious. A lovely day

star star star star star
Lovely meal, Courteous staff and a pleasant cruise , was so nice to see so many historical London buildings without having to walk or tube, will definitely be booking again, next time we will try the afternoon tea

star
Didn’t attend and Very Unhappy. I tested positive for coronavirus the morning of the cruise and therefore missed the cruise. I continued to test positive and emailed them but was told I’d could rebook but I’d only get 50% off the next booking. I’d paid for a window seat as well and was also told it could be more when I next book too. I offered to send the LF test information to them and asked if I could even book just the cruise without lunch instead (when I test negative) but no. Asked if it could be forward to the manager for their discretion given the circumstances - but no, same email from same person saying - no, 50% or nothing basically. Terrible customer service!!! Was looking forward to this very much and had it been a cold or something where the government doesn’t give a ‘stay at home’ guidance, I would have gone! Dissappointed and will not be booking this - would rather leave it than give this company any more of my money!!!!!!! Avoid - Disgusting Customer Service with no thought for other customers who, had I have gone on the cruise, could have had this virus and been very poorly. On the Thames river cruise in London