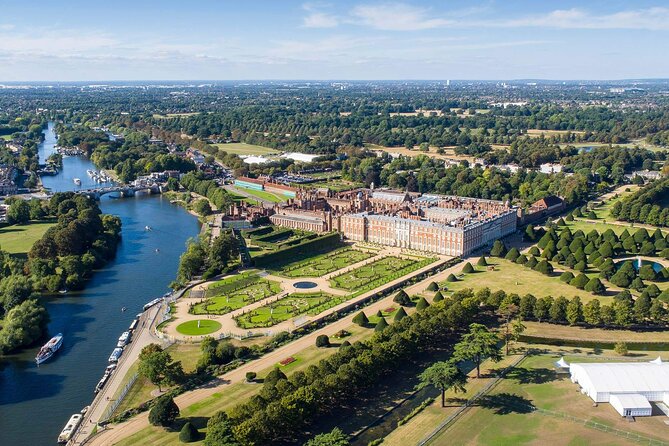 A fascinating insight into generations of the Royal family followed by a riverboat picnic. It’s a holiday highlight.

Close to London and a pleasant drive, Hampton Court was the jewel in Henry Vlll’s crown. The chance to see it in situ with the baroque palace of William and Mary, built some 150 years later offers a unique insight into a span of English History like no other.

As well as the magnificent architecture, the grounds and gardens of Hampton Court are world famous, from the maze to the huge grape vine, the long avenue of topiaried Yews leading down the river and the beautiful boat house, it sometimes seems as if Hampton Court has more to offer than all of England’s other palaces put together.

And after all this excess of grandeur what could be more pleasant than a picnic on the river aboard the delightful Princess Freda, a piece of British History herself having been part of the armada of ‘little ships’ that saved the British Army from Hitler at Dunkirk in the summer of 1940.

INR 37,212
p.p. onwards
Itinerary
This is a typical itinerary for this product

Explore this remarkable and unique double palace, where the ages overlap and the course of history changed forever, created by Cardinal Wolsey, the 'Second King' of England ,only to slip through his fingers as he fell from the King's favour. Climb the steps to wonder at the greatest medieval hall in England. Stand in Henry Vlll's 'Great Watching Chamber' where nobles vied for his attention and his wife was declared an adulterer. Walk the halls through which, some say, her ghost still runs, crying out for the forgiveness & mercy that was never to come.
Step through a time portal at the end of the Haunted Gallery into the Baroque Palace, William lll's and the Glorious Revolution’s answer to Versailles and the guillotine. See the world of the Georgian court with all its intrigues & intricacies of dress.
Enjoy the famous gardens and visit one of the worlds first ever tennis courts.
Wander through the grounds towards Hampton Court Pier and board Princess Freda for the next adventure, .

Thames River Boat picnic. Provided with a classic picnic basket you board Princess Freda (herself one of the famous Dunkirk 'little ships') or The Connaught (another WW2 veteran) and sail the serene waters of the beautiful upper Thames. Follow the route taken by British monarchs for over a millennium as they moved between their palaces and strongholds. See the numerous Islands including the famous Eel Pie Island, much beloved by the aristocracy of British rock and roll, the Rolling Stones and see many of the beautiful and quaint riverside residences nestling along the banks.
You'll be met at Richmond or Kew and chauffeured back to your hotel.

star star star star star
Mark Cairnes was a brilliant & accommodating guide! He was timely, professional and ensured our experience was memorable and our expectations were met. Great fun!

star star star star star
It would be difficult to say which part of the Hampton Court & Thames Riverboat Picnic outing is my favorite - Hampton Court or the Riverboat Picnic. As a long time fan of English history, I could not have asked for a better guide through Hampton Court. The level of historical detail interspersed with interesting anecdotes transformed a walk through a beautiful old building into a glimpse of a home where people lived and worked. The Riverboat cruise down the Thames and the delicious picnic provided offered a relaxing getaway from the hustle and bustle of London. Both of these experiences combined to make a lovely day out.
Previous Next
keyboard_arrow_up