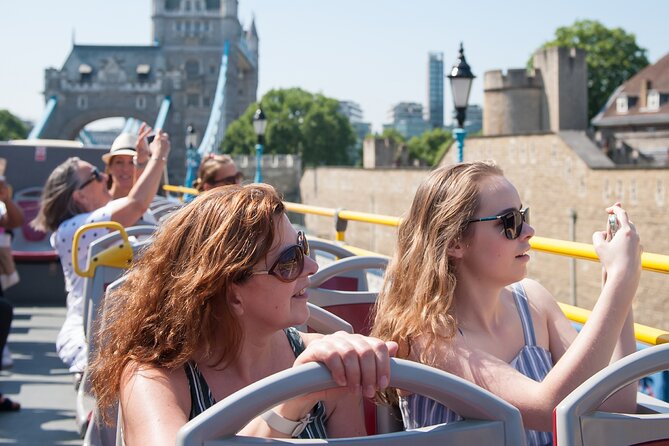 Our Jubilee special tours! From 21st May to 4th September:

This year, Queen Elizabeth II will be the first monarch to reach the Platinum Jubilee milestone, making here the longest reigning and oldest British monarch. Naturally, this calls for celebration!

So, whether you are a first-time visitor or a born-and-bred Londoner, get involved in this unmissable event, and join us as we commemorate The Queen’s historic reign. Embark on a journey through royal history with our knowledgeable and enthusiastic local experts. Take in the magnificent views, and (re)discover the places that make London so unique under a whole new glorious light.

Our Jubilee special tours take place daily with departures from #13 Grosvenor Gardens at 9am, 10am, 12pm, 1pm, 3pm and 4pm. Please note the tours are available on a first-come first-serve basis.

Make a day of it and visit Buckingham Palace, Westminster Abbey, St Paul’s Cathedral, the Tower of London, or other royal hotspots, after hoping off the bus.

Operates: Buses run daily from 8:40am to 4:20pm from Monday to Thursday and to 5:00pmfrom Friday to Sunday. Frequency at the stops will be 40mins.

star star star star star
Friendly and knowledgeable. Funny and entertaining commentary. Was a fantastic way to see the sights. Great value, but definitely plan your hip iffs/ons to make the most if it. Will definitely use again if we come to London.

star star
This could be improved by a better commentary. More facts and more historical relevant stories, rather than 'when I go to work I cross this bridge' and 'when I get back to my tiny flat I don't want to make tea'......so what !

star
Out of date recordings still reference the Queen, who has now passed away weeks ago. Clearly no one takes care of these recordings or updates them. Disrespectful, shameful, and shows a lack of interest in tourists and a drive to just make money. Don’t waste your time.

star
This was the most bizarre commentary I’ve ever heard. Completely mad! Learned pretty much nothing about London and what few “facts” were mentioned, regularly bore no relevance to where we were geographically. Has the route changed to avoid the congestion charge areas I wonder? Regardless, a complete waste of time and money

star star star star star
A fantastic way to see all of London when you just have a day to explore with kids (aged 9 and 11 and prone to tired legs). We used both the orange ‘original’ route and blue ‘Royal’ route getting to see everything that you would hope to see. On a hot August day this was the best way to see the city, avoiding the underground, with live tour guide on the orange route and audio tour through the headphones- you pick up the free headphones as you enter the bus. We learnt a lot with both. The audio tour made us Brits chuckle and was interspersed with British tunes inc toe tapping Elton John! Buses were really regular, the app was helpful. We purchased our tickets using Tesco club card boost points. If you do this make sure you get enough vouchers to buy the tickets at ‘on the day’ price as the online price doesn’t count when you have to redeem your code.

star
Very disappointed in your service. Waited forty minutes for a bus at Westminster station also known as bus stop M. Saw Toot bus go by on the other side of the road but never came by our stop. Gave up and went to Westminster bridge but told to go across the road to get on a yellow line bus since we wanted to get to St Paul’s. Finally make it to St Paul’s after waiting over an hour and walking to three stops before securing the right bus and the right line. What was so frustrating was Big Bus had many buses and we rarely saw a Toot Bus. I will never recommend Toot Bus to my friends.

star star
The commentary ranged from inadequate to total rubbish; absolutely dreadful. I have no interest whatsoever of who kissed the narrator where, when, and why, but would have really liked to know more about London. I was able to tell my Grandchildren a bit about Boadicea from my own limited knowledge of history but we passed many places I wanted to know about. Watching the Queen's funeral I found out the name of a few other places we saw (Wellington arch for example) but I felt cheated not to have been told about these places and their history when we were actually there. We got on the tour at the Tower of London and were assured that the bus would not stop. WRONG. The worst was when we got to a point in the route where we had to find the next bus round the corner and down a busy street. No guide; inadequate directions. Don't waste your money on a Tootbus Tour. I

star star
I don't understand the great reviews, unless people are rating it only as a bus, not a tour bus. About a third of the time the recording did not match up at all with what we were driving by, so we couldn't tell what the voice was referring to. The recording also didn't say things as simple as "on your left" or "on your right". To make matters worse, we used the app to figure out what buses were close to us. Twice there were busses on their way coming towards us for about 15 minutes then completely disappeared off the map. Another time there were no busses at all along their route for over an hour. If you just want to use it for a ride around London without learning what the highlights are, and if you don't care when your bus is coming, then it's a fine city bus. But we didn't find "tour" to be an accurate description at all.

star
Do not get this bus. All the other services have more buses and more frequent services. Some of the bus stops are poorly marked with the ticket sellers not helpful at all. We waited almost an hour at the London eye stop on the blue tour. The stop is not marked and 50 meters away from the actually bus stand. The bus driver saw us waving at him to wait and he just drove away. The ticket seller then lies about how long we have to wait for the next one. In the meantime all the other tour buses kept going past us.

star star star star star
We had an excellent time using the hop on, hop off buses on our trip recently. 2 routes, one of these was a 2 minute walk from our hotel so it was great to jump on then swap routes at different points if we wanted. We done both routes at various points of the day and night, and every staff member we saw whether that was a driver or guide at the stop was friendly. When booking, I decided to go for a 2-day ticket as it was only an additional £5 for us both which was a bargain and meant we didn’t need to rush on routes or at stops when we wanted to get off and explore! Great experience.
Previous Next
keyboard_arrow_up