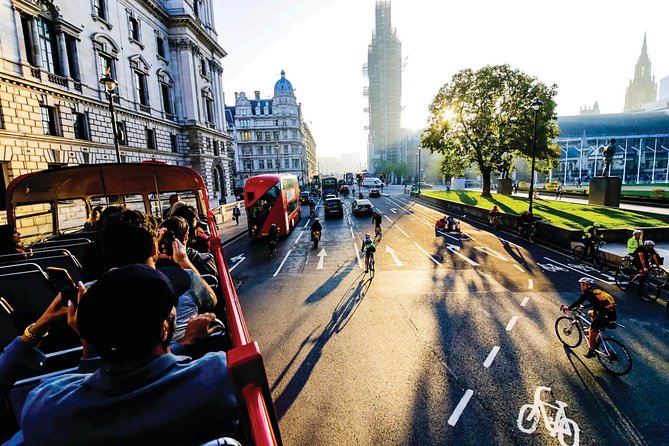 Experience the city as the sun begins to set and watch the city burst into life at night from the open-top deck. London looks spectacular at night and we have the best seats for you to enjoy the view from above!
Hop on board our London by Night Tour, sit back, relax and enjoy the fresh air as you rediscover the city from a whole new perspective.
We’ve picked out the best bits of London and designed this tour so that you can see the most famous landmarks and enjoy incredible views of the city.
In just 90 minutes, London by Night will take you past some of the most iconic landmarks and attractions at their glittering best such as Trafalgar Square, Piccadilly Circus, Houses of Parliament and Big Ben, London Eye, St Paul's Cathedral, the Shard, Tower Bridge, Tower of London, Southbank and many more!
There really is no better way to get around London and see the city’s most famous landmarks in such a short space of time.

Operates: The bus tour starts and finishes at Coventry Street Guest are requested to report to the meeting point at least 15 minutes before the scheduled departure time.

star star star star star
Jez, Peter, and the driver peter excellent, music playing asked everyone for requests, drinks flowing nothing to much trouble, very knowledgeable for sights had everyone laughing, would recommend this tour with them and we will be doing another with our family

star star star
There were lots of sights but no one we could stop at long enough to look or take a good photo. If you only have a little time this is fine but I won't say it was anything spectacular because you can't really look for long. Also picks up in a very busy tourist area with high crime. Not my best choice obviously.

star star
Directions to the bus were very poor on the site, we had to ring the office. The driver and guide were very nice. However the tour was dissappointing in that it was on lots of side streets and trying to look at things between buildings etc. It wasn't made clear that once dropped off on the boat you were on your own. Although the description was London by night bus and boat tour, the boat turned out to be just a water taxi from one point to another. Which you then chose your point of embarkation. Very disappointing.

star
PLEASE DO NOT USE this company, they allow you to book tours online, take your money but don't turn up! Only to be told they don't do night tours by one of their drivers, £75 out of pocket and one very upset 7yr old!!!! Don't respond to email or phone calls.

star star star star star
Great tour guide and easy way to get a quick overview of the history that London holds… helps in deciding what are the areas you would like to return to! Also not too long to start boring the children. It was engaging till the end for my son.

star
We stood at London eye waiting for the bus! Which never came!! We run after one across where we were waiting and the driver ignored us-shaking his head. We followed after one in a taxi and were told by the driver that we had to join at Covent Garden. This was not communicated to us when we booked!

star star star star star
The bar bus was a great experience, made even better by the friendliness and knowledge of Peter & Jez. Nothing was too much trouble and the guys really helped give the tour a personal feel, answering any questions we had about the area and also taking music requests. Really great trip with staff who went above and beyond, would definitely recommend.