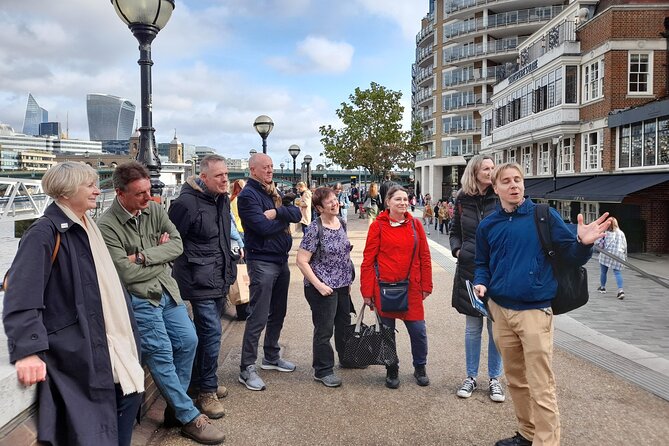 Discover 400 years of stage history in the theatre capital of the world! A journey across the West End and the South Bank featuring the biggest names, greatest successes & most infamous disasters.

INR 1,729
p.p. onwards
Itinerary
This is a typical itinerary for this product

Learn the history of the Coliseum. The largest theatre in the West End!

Discover the many stars who made their debuts on this West End stage. Including Peter Pan!

Hear of the great productions of the past. The only theatre where two significant theatre giants ever shared a stage.

Learn of the history of this beautiful theatre. See the bust of Shakespeare on the front - the only one in the West End!

Discount ticket booth - how to get great West End seats at low prices! Old music hall spots - historic theatres such as The Alhambra & The Empire.

A theatre favoured by both Sir Ian McKellen and Dame Judi Dench. There's also rumour of a haunting...

The second oldest active theatre site in London. Also home to the second-longest running musical - The Phantom of the Opera!

Opening in 1881, the Harold Pinter Theatre is one of the oldest playhouses in the West End. Hear of the stars that have caused a great sensation here - including Marilyn Monroe!

Now home to The Book of Mormon, the Prince of Wales has had a rich history of comedy & musical spectacles. Famous names who've appeared here include The Beatles, Peter Sellers and Barbara Streisand!

The road with more theatres than any other! Hear about the history of Shaftesbury Avenue and theatres including The Lyric, Apollo, Gielgud, Sondheim & The Palace.

The first Edwardian Theatre, opening in 1901. Also once home to a truly legendary production of our time!

Now named after the great Sir John, the Gielgud has seen a few famous faces give their West End debuts. Including Harry Potter himself!

Learn the history of Les Miserables, the world's longest-running musical. Also - a few famous faces who debuted here in the 80s!

Once a famous music hall venue, now home to Harry Potter & the Cursed Child. Discover the origin of the phrase 'bring the house down'.

Although unremarkable on the outside, the Ambassadors has had a rich theatre history. Legendary theatre stars who debuted here include Vivien Leigh & Paul Robeson.

Home of The Mousetrap - the world's longest-running play! Discover the history of this unlikely theatrical hit.

The West End's smallest theatre. Also once home to the most controversial play of all time!

One of the oldest theatre spots in London - est 1732. Now home to the Royal Opera and the Royal Ballet.

Home to The Woman in Black - the longest-running horror play ever. Hear of the spooky stories that have occurred during the play's 30+ year history...

The oldest active theatre spot in the West End. Discover the legends of the past who made their names on its legendary stage.

Now home to The Lion King, going since 1999 and still a hot ticket! Hear of the leading actors of the Victorian era who once dominated the Lyceum's stage - Sir Henry Irving & Dame Ellen Terry - and also the genesis of a famous gothic horror creation.

Hear about the history of our National Theatre. Also, the founder of the National, Laurence Olivier, stated the opposite.

Discover the history of Bankside - where Shakespeare made his name. See the famous reconstruction of Shakespeare's Globe and a final top-secret theatre location!

star star star star star
Charlie is so personable and well-informed that his tour is a total delight. Even though we shared a theater background, I learned so much and I heartily recommend spending your time learning and laughing on this great tour. And honestly, the time flew by. While I am considerably older than Charlie, the walking was not an issue. Thanks Charlie!

star star star star star
Charlie did a fantastic theatre tour! He is professional, friendly, and incredibly courteous. And what a value! I thoroughly enjoyed the information that he shared. The time flew by…. Highly recommend!

star star star star star
I had a great tour and learned many thing about the theatres at West End and the South Bank, including the famous Globe theatre. It's a lot of walking, but Charlie ensured that I wasn't hungry or needed some food. He also made sure that I understood everything (I'm not a native speaker), which was great. During the tour he has shown me old programs of the theatres, which made his explanations even better. It was a great trip through the history of Londons theatres and you will learn a lot. We visted many theatres and Charlie could say so much about each of them, his knowledge is fantastic. If you like to go to the theatre I highly recommand doing a walk with Charlie, he even offers you tips to get cheap tickets, in case you are unsure how to get hold of them.

star star star star star
Really enjoyed the tour with Charlie, packed full of interesting and quirky facts about the fantastic tradition of theatre in London. Even though I’ve lived here and enjoyed many plays, this tour gave me a new perspective on how theatre has evolved, and how some acting stars got their big break. Charlie is very knowledgeable and passionate about this aspect of our culture. Highly recommend!

star star star star star
There is no better tour in London than Charlie's. Not only does he show you around and provide you with the history you are promised, but he takes care to make sure all your questions are answered in a caring and respectful manner. This is someone who loves the theatre so wholly that I feel lucky to have found this tour so I could share in the knowledge as well. He is brilliant and kind-hearted. You will undoubtably have the best time.

star star star star star
Really interesting tour. Charlie certainly knows his stuff with detail about the theatres AND the plays and actors who have performed there. It was so good - I would like to go on another with him!

star star star star star
A great tour by someone who loves theatre and wants to share that enthusiasm. Lots of information but never overwhelming. Really liked looking at theatre programmes and photos from back in the day - a terrific touch. Would happily book again. Recommended for locals and tourists alike.

star star star star star
What a wealth of information for theatre lovers ! Charlie is full of facts and stories ..I learned so much and now have a lot to read at home about the legendary actors and plays he mentioned . A perfect tour for all thespians ! Hightly recommended!
Previous Next
keyboard_arrow_up