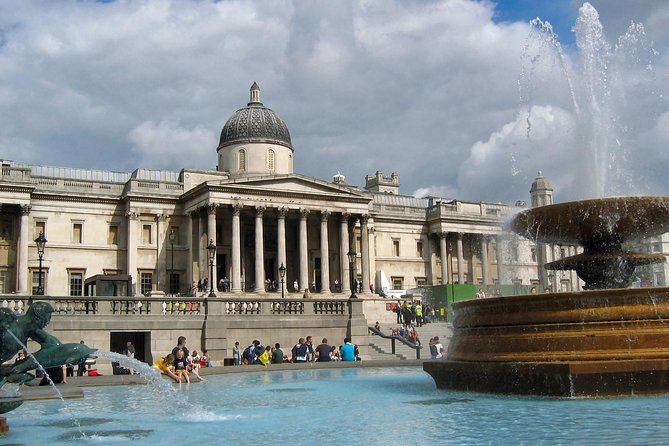 See the best of London’s National Gallery, one of the world’s most visited art museums, on this private 2.5- to 3-hour tour. With a specialist art historian guide, look at the Gallery’s most impressive paintings and learn more about the artists behind them. You will enjoy the works by the Italian Renaissance Masters, including Leonardo da Vinci and Michelangelo, and Flemish masterpieces from the likes of Rubens and Van Eyck. You’ll also take in timeless paintings by French Impressionists and Post-Impressionists such as Monet, Picasso, and Cezanne.

INR 18,960
p.p. onwards
Itinerary
This is a typical itinerary for this product

Choose from a morning or afternoon tour, and then make your own way to the National Gallery, a striking Pantheon-style art museum raised on a terrace overlooking Nelson’s Column and the iconic lion statues in London’s Trafalgar Square.

Meet your guide, an art history specialist, in front of the National Cafe in Trafalgar Square for a coffee and croissant before heading inside to trace European art across the centuries.

The National Gallery boasts one of Europe’s greatest collections of paintings by the Old Masters (European artists whose notable works were produced between the Renaissance and 18th century), and houses more than 2,300 artworks dating from the Middle Ages through the 20th century.

Stroll from room to room, taking in the mosaic floors, marble pillars and floor-to-ceiling art, and listen as your specialist guide talks you through the gallery’s key masterpieces as well as the artists behind them.

Throughout your private tour, pay special attention to the Italian greats — from the 13th-century Masters to the High Renaissance of Piero della Francesca, Botticelli, Leonardo da Vinci and Michelangelo — and the Flemish school of art, including works by Rubens and van Eyck, considered by many to be the first great master of Flemish and Early Netherlandish painting.

See, too, masterpieces from Rembrandt, as well as the gallery’s French Impressionists and Post-Impressionists collection, one of the finest of its kind in the world — crammed with timeless works by Monet, Cezanne, van Gogh, and Picasso.

After roughly three hours, your tour concludes inside the National Gallery, leaving you free to continue exploring independently, should you wish.

star star star star star
Mrs. Letts is the best art guide we have ever met. She is incredibly passionate, experienced and knowledgeable. She was able customize very effectively the tour to our interests and needs. I can’t recommend her enough, she is brilliant.

star star star star star
Stephanie of Babylon Tours provided an amazing tour for our party of four adult family members. She was inspirational, knowledgeable, and great fun! She answered all our questions and made sure that we saw everything we wanted in the time with her. This experience was the highlight of our week in London.

Our meeting site kept changing and the guide nor we had a sense of what was happening. Finally called the contact number and given guides cell number. I wish we had just gotten headphones. We knew how the commisioning system worked, but each painting was explained and re explained. We Asked to see highlights, but guide had her favorites and that is what we got. The gallery has its own tours. We got this so we could hear, but English was not 1st, 2nd or 3rd language so understanding was difficult. I would not do this tour again.
k