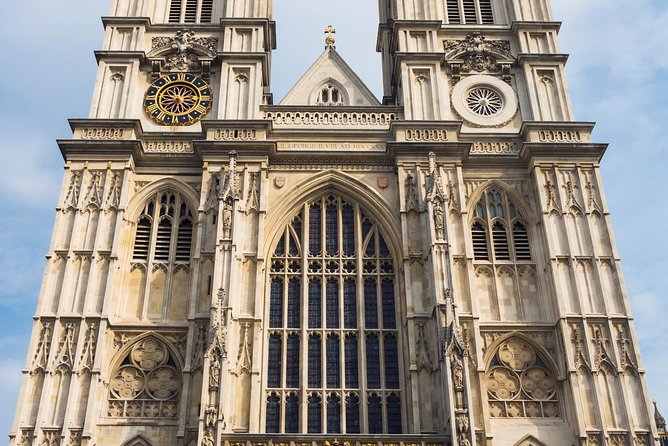 Delve into London’s royal history on this private 3 hour morning tour. With your very own personal guide, tour Westminster Abbey, the Royal Church of England and the country’s coronation church since 1066. Admire the early Gothic architecture and learn about the royal events hosted there. Then, stroll up Whitehall, where the British Prime Minister is based, to Banqueting House, the only surviving part of the grand Palace of Whitehall. Wander around the banqueting hall, see the ceiling paintings by Sir Peter Paul Rubens and learn about the British royals.

INR 25,518
p.p. onwards
Itinerary
This is a typical itinerary for this product

Choose from a morning or afternoon tour, and then meet your guide — an art history specialist — by Westminster Abbey. Snap photos of Gothic crowd pleaser, perhaps the most beautiful early Gothic building in the country, and hear about the abbey’s long, rich history.

As you step inside with your guide, discover how the abbey, a royal mausoleum for many centuries, has been used to crown all the kings and queens of England, except two, since William I’s coronation in 1066.

Learn about the royal weddings hosted here, including the weddings of Queen Elizabeth II to Prince Philip and Prince William to Kate Middleton, and admire the many artworks and monuments dedicated to soldiers, artists, statesman and writers. You’ll also see the College Garden. At some 1,000 years old, it is thought to be the oldest garden in England.

After touring Westminster Abbey, walk with your guide to Banqueting House, the only remaining part of the Palace of Whitehall, a vast royal complex that was burnt down in 1698. Before heading inside, stand on the spot where Charles I was beheaded in 1649 after being convicted of high treason. Then enter the 17th-century building with your guide.

Learn about Charles I and his father, James I Stuart, for who the Banqueting House was built, as you wander from room to room. See the impressive banqueting hall, which would have been used for balls, masques and other royal ceremonies, and admire the elaborate ceiling frescoes that were painted by Sir Peter Paul Rubens.

When the time comes, bid farewell to your guide outside Banqueting House and continue your sightseeing independently or make your own way back to your hotel.

Please note: The Banqueting House is open daily except on Thursdays when it is closed for private events. Should you opt for a Thursday tour, you will instead enjoy an extended visit to Westminster Abbey or Royal Horseguards Museum but please let us know your preference.

The venue is outstanding and our guide, Wendy, was really good.

Excellent experience. Really enjoyed the tour of Westminster Abbey and the National Gallery. Alison was an outstanding guide.

Excellent tour. Both Westminster Abbey and the National Gallery are well worth visiting.

star star star star
We had two experienced guides but the time for the three monuments is definitely too short.

Abbey and Bangueting hall were very interesting. But the guide occasionally went off on unrelated tangents.

Knowledgeable guide who did a good job. She was enjoyable to be with.

Our guide Wendy did a really nice job. She was very informative, very pleasant, personable, gracious and she kept asking us if we wanted more information. It was especially nice to have it be a private tour for just our family. Westminster Abbey is beautiful and she did a nice job of giving us additional detail about the sites we saw between there and the National Art Museum, more than we had gotten our a driving tour covering some similar spots. She made sure we got to see all of the most famous artists and paintings in the galleries. I would recommend her and this tour to anyone.