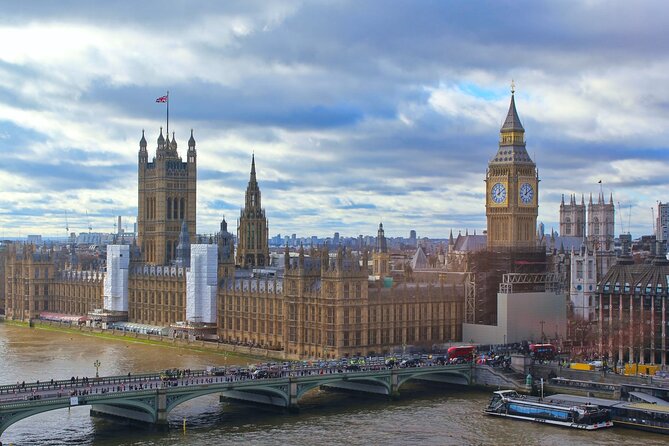 Maximise in one day most of your time in London with our qualified and authorised London blue badge tour guide, taking you to the must-see attractions.
Starting with exploring inside Westminster Abbey moving on to the most iconic sights, Buckingham Palace and learning about our current royal family and Queen Elizabeth II. Stroll further the Horse Guard Palace, The Calvary on Guard, Downing Street, Houses of Parliament with Big Ben and the surrounding statues with the historic personalities.

CNY 5,053
p.p. onwards
Itinerary
This is a typical itinerary for this product

Westminster Abbey is one of the most significant and oldest buildings in the country. For centuries, it has been used for many important purposes including coronations since 1066, 17 royal weddings, and as a final resting place of British Monarchs and other renowned individuals including Sir Isaac Newton, Geoffrey Chaucer, Stephen Hawking, George Frederic Handel, Charles Dickens, and many more.
The church’s significance to the history of Britain was formally identified when it was declared a UNESCO World Heritage Site in 1987.

Buckingham Palace has served as the official London residence and administrative office of the British royal family since the 19th century and is one of the few remaining working royal palaces in the world.Don't forget to take a photo stop outside Buckingham Palace and the world's famous balcony.

St James’s Park and The Mall was the first of The Royal Parks to be opened to the public and it provides habitats for a variety of different species of bird life including the robin, blackbird, wren, blue tit, great spotted woodpecker, and tawny owl. It is most famous for its Pelicans who have resided in the park for nearly 400 years. The Pelicans were originally presented as a gift from the Russian Ambassador to King Charles II. Enjoy impressive views of the lake – a key habitat in the park and home to over 15 different species of waterfowl. The park’s famous flower beds at the front of Buckingham Palace are a familiar backdrop to pageants including Trooping the Colour, as well as state visits and other ceremonial occasions.

Houses of Parliament and the famous clock tower Big Ben
The Palace of Westminster, to give it its official name, serves as the meeting place for both the House of Commons and the House of Lords, the two houses of the Parliament of the United Kingdom. Both Houses work on behalf of UK citizens to check and challenge the work of Government, make and shape effective laws, and debate/make decisions on the big issues of the day.

Continue the journey with boarding the boat at Westminster Pier. Refreshments, sandwiches, hot or cold drinks will be available to purchase while resting the legs and enjoying the rest of the tour.

St Paul's Cathedral
For more than 1,400 years, a Cathedral dedicated to St Paul has stood at the highest point in the City 365ft tall with its iconic dome. The present Cathedral, the masterpiece of Britain's most famous architect Sir Christopher Wren. It was built after its predecessor was destroyed in the Great Fire of London in 1666, and services began in 1697. This was the first Cathedral to be built after the English Reformation in the sixteenth-century, when Henry VIII removed the Church of England from the jurisdiction of the Pope and the Crown took control of the life of the church.

Built-in 2000 from a disused power plant and extended in 2016 with a newer Blavatnik building, Tate Modern is Britain's national museum of modern and contemporary art from around the globe, and the world’s most visited contemporary art gallery.

Enjoy the view of Shakespeare's theatre from the river.

Embarking at The Tower Bridge Pier and crossing over the Bridge. Tower Bridge is both a remarkable feat of engineering and one of London’s most instantly recognizable landmarks. The famous bridge is a popular subject of London postcards, leading many to mistake it for London Bridge, which is actually the next one upstream.

Tower of London Guided Tour The long, bloody history of 'The Tower' is one steeped in myth and legend. Countless prisoners have passed through its 'Traitor's Gate' over the years on their way to jail here, with Anne Boleyn and Lady Jane Grey among its most famous prisoners. As well as being a notorious prison, 'The Tower' was also a place of execution. The last person executed here was in 1941, and over the years dozens have been shot, beheaded and even burned at the stake. As one of the first groups to enter, you will beat the mid-morning crowds to catch an unspoiled glimpse of the priceless Crown Jewels collection. As well as this, you will receive an exclusive guided tour of the Royal Armouries by a White Tower Warden -