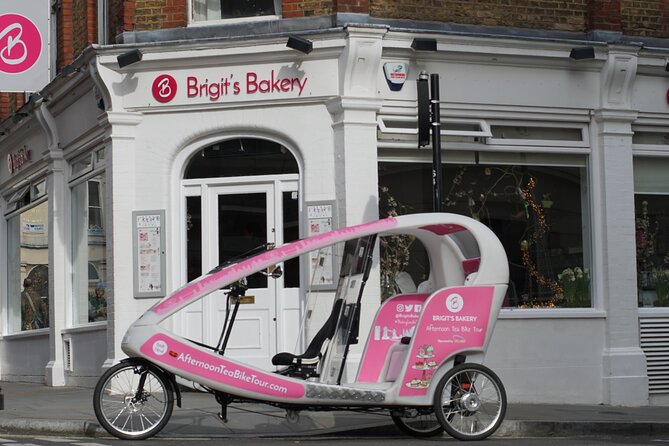 We are the experts in pedal powered, electrically assisted tricycle cabs known as pedicabs, that allow you to experience London from a unique road level viewpoint.

We have partnered exclusively with the wonderful Brigit’s Bakery to bring you an afternoon tea with an array of tasty sandwiches, delicious cakes, pastries and quintessentially English cups of tea for two. From the comfort of a private Veluba pedicab, it is a truly indulgent way to see the sights of London.

Your Veluba driver will follow our London Highlights route which takes in the most iconic parts of the City, including Big Ben, Houses of Parliament, Trafalgar Square, and more; and hear their stories via the onboard multilingual commentary.

This is the perfect way to celebrate any occasion, from birthdays to anniversaries and everything in between.

The Strand is an attraction in itself. Our first point of interest is the famed street itself

Possibly the most famous of all London’s hotels, it has been home to many exclusive guests

When travelling up and round The Aldwych, hear of one of London’s oldest and most prestigious hotels, The Waldorf

The incredible home of Australia’s Embassy, featured in a notable film on your right

As we cruise down Fleet Street, hear tales of a certain infamous barber

Up next on the left is a legendary pub, not to be missed on a Friday night!

As we coast down the stunning Victoria Embankment, see Somerset House on your right

Just after passing under Waterloo Bridge, you can’t miss this striking commemorative structure

The unmistakable monument is seen on the right, with its bronze eagle seen brilliantly through the panoramic view

One of the capitals most iconic landmarks seen from all angles

Combining both the Houses themselves, Parliament Square and Westminster Abbey, we circle round both attractions heading towards Whitehall

Our final stop, on the iconic square where you will learn of the history of how it was named and the plinths that sit proudly on each corner

star star star star star
The Veluba afternoon tea experience didn't disappoint! The fact that its dog friendly for me sets it apart! Being able to share special outings with your dog is for me so important. It's also a chance to put your training to the test , so your pooch remains calm in the TukTuk, so well socialised dogs will have no problem. Be aware of hot days, and make sure your dog stays cool , plenty of water. Veluba kindly re-filled our flask with water just for this purpose. Such a friendly team, and the tea from Bridgit's Bakery was fantastic, perhaps add in a little dog friendly treat to crown the experience!

star star star star star
A novel way to see London whilst enjoying an afternoon tea! Would recommend even if you’ve seen the sights before as this is a completely unique perspective!! Felt so relaxed with Beth, who took us around and who was full of so much knowledge about the sights!! Highly recommend!!

star star star star star
Did the tour with my daughter for birthday celebration. Such a fun way to see the sights. Waving at passers by I’ve never see so many people smile back at you when walking on foot.. Food was delicious and was plenty for the hour you’re in the bike. Beth was lovely and would definitely do again in the future.

star star star star star
This was an amazing experience. Thank youuuuuuuuu for such a wonderful afternoon. From the greeting at the bakery to our final goodbye, BETH (our tour guide) you were ABSOLUTELY AMAZING. That ride was soooooo smooth. I will be definitely recommending this to everyone I know. The food was lovely. Well done Veluba bike Tour. You made my day 😘🎉🎊🎉🎊🎉🥰🥰🥰🥰🥰🥰. P.s. It is very child friendly 😘

star star star star star
A lovely little adventure with my 6year old little girl, she loved being driven around like a princess whilst eating some delicious cake. Hannah was lovely and very informative! Highly recommend! Great value for money!

star star star star star
Comfy ride, tasty food & a glass of my favourite tipple all whilst catching up with a friend & her pooch! Yes, you can also bring your furry friend on this along too! We loved it!! Would definitely recommend!

star star star star star
Lee was great. He was energetic and personable. He was relatable and kind. We preferred to listen to him instead of the speakers. The afternoon tea was the best food we had in all of Europe.

star star star star star
I'd wish I could give you like 10 stars! It was perfect! We booked the bike tour through London with afternoon tea. The driver was a lovely young lady who had good hints where to go shopping and eat Indian food. For the tea we had one regular and one vegan optin with a prosecco and a hot cuppa. Both were so delicious. We feared a bit at the beginning about how to eat in the velotaxi. But it turned out quit doable.

star star star star star
The tour by tut gave a different perspective of the sights of London. Lou our guide was charming and there to answer any questions. Afternoon tea was a bonus. If in London at Xmas will book the evening tour to see the lights...how magical.

star star star star star
It was a wonderful tour with tasty coffee (of course you can also get tea) and snacks, Beth was super friendly, the audio tour of the sights interesting, and very dog friendly ... my puppy also enjoyed the tour very much, would absolutely recommend to try it
Previous Next
keyboard_arrow_up