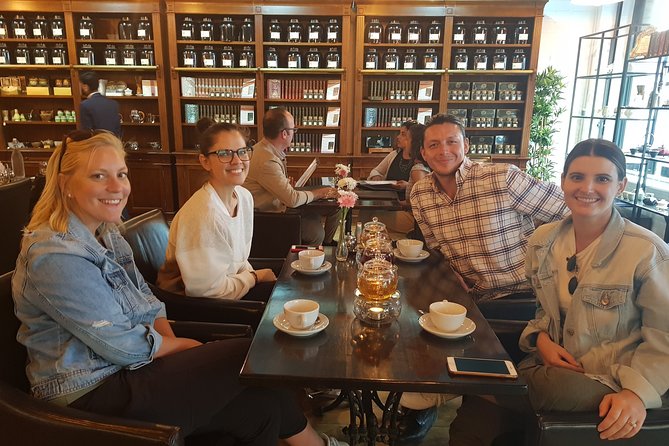 Walking Food & Drink Tours In London are a must. Walk Eat Talk Eat's East London food tour was the first one in the area. We now cover the South and West of London too.

We've had thousands of customers along, shared zillions of stories and are close to serving up our 3000th salt beef bagel.

​We run our East End Tour all through the week and on the weekends that's when we hold our Hidden Gems and Portobello Tales tours.

​Why East London? Because the food is amazing, there's so much history to share and our tour guides have lived in those areas, so they know them inside out and love sharing their local haunts.

I myself have lived in London now for over ten years and I can safely say this city still surprises me with all its hidden secrets old-and-new. What I believe gives us that unique essence is that myself and our tour guides ( even in our spare time ) go in search for new cuisines to be tasted and explore hidden bits of London's history waiting to be spoken about all for you.

From learning about parts of Victorian London that haven't been touched for over a hundred years to the very new & electric Brick lane. From seeing all the different cuisines and cultures mixing together to then stop and talk about the old Truman's brewery, which dates back to the mid-1600s and was once the largest brewery in the world.

Your three-hour tour will begin near Old Street Station, whetting your appetite with craft beer and sweet treats from an artisan doughnutry. Then you'll be whisked away to sampling kosher bagels and local real ale or wine. We will explore the bustling Spitalfields market and also try some succulent morcilla or a pick from a selection of Basque pintxos from Sagardi. Further down the lane we go we will taste some delicious homemade pakora / bhaji or samosa from one of the oldest Bangladeshi sweet shops on Brick lane.
At the end of the tour, you'll have the full flavour of the East end - served with a spicy side helping of history along the way.

Just nestled away in the very hip and trendy Shoreditch district there lays one of London's hidden secrets from the Victorian era. I can't say too much as It will ruin the surprise of what laid there but in short, this area that we will go to was the epicentre to a pivotal movement that happened in London which then resonated through-out to the rest of the United Kingdom.

As we walk down the very electric Brick lane in the East End we will see, taste and smell all the attractions that make it one of the top places to visit in London. From incredible street art & street food to musicians playing music on the lane. This part of London has of recent times kindly welcomed a bohemian sort of person and that has truly lightened up the whole area.

The Truman's Brewery dates back to the mid 1600s and was the largest brewery in the world at the time. We will walk into where the workers used to clock in and out for work and talk about the history of the building and what lays in front of it for its future. The old brick chimney dominates the sky line and acts as a strong reminder to what this area was known for over the last 500 years. From brewery's, factories, tanneries, distillery's and brick kilns which were all laden along the lane and the surrounding area. I will explain why, on the tour.

Here we will walk down and talk about the French Huguenots who used to live here after being exiled from France in the 1600s. Their houses still remain intact and with a hefty price tag too. Also this area was known to be Jack the Rippers old stomping grounds which we will talk and explore more about too.

Built in 1714 and designed by Nicholas Hawksmoor (Christopher Wren's apprentice) has stood strong and tall in the area especially when the blitz hit London. Its design was mocked when it was built but now is revered for its beauty. We will talk a little just outside the church and also take in the incredible vantage points of the surrounding area where we can see many other special landmarks too.

Brick lane market - let's say - is the younger sibling to Spitalfields Market across from Brick Lane. Not too many of the tourists know about it and still is a little hidden gem. This market only opens on the weekend and sometimes on a Friday. If we're lucky to do a tour on one of those days we will surely go inside and have an explore.

One of London's oldest markets, from humbled beginnings selling fruit and veg to a very swanky and hip and trendy quarter of London. From latte's to the latest haircut, anything you want can be found here. Also, the building itself is incredible, a sort of cathedral with its incredible steel beams to the vast space it sits on. You can easily get lost in here; which isn't so bad if you ask me.

star star star star star
Our tour with Eddie discovering the hidden gems of East London was a treasure in itself! Eddie is an engaging, knowledgeable and fun guide with great jokes, encyclopedic knowledge and the ability to read what the group needs. We loved all the locations we went to and had so much fun with Eddie along the way - it felt more like a groups of friends doing a food/pub crawl than a formal tour! In addition, Eddie is the consummate professional, very responsive in the lead up and on the tour date and was able to accommodate our additional requests. He responded to all my notes quickly and it made the whole process very smooth. A wonderful tour from start to finish and I could not recommend Eddie and his tours/guides more.

star star star star star
This was a great way to see Shoreditch, whilst learning lots about the local area and eating delicious food! Eddie was a fantastic tour guide, who had excellent and unusual facts at his fingertips that I shall not forget! The food stops were all really varied and by the end, I couldn't eat another thing. Would highly recommend!

star
Not at all what is advertised, 2.5 hrs into the tour and only one glass of water & pretty poor food. No option of wine, only craft beer right at the end of the tour. I have just read the itinerary after getting back to our hotel & the tour is nothing like the itinerary. VERY DISAPPOINTED we were the only 2 on the tour

star
ABSOLUTELY AND COMPLETELY DISSATISFIED WITH THIS TOUR. We were so looking forward to the tour. My wife and I were the only couple on the tour. The food, beer/wine promised was not correct. The food consisted of a small amount of tomatoes, a small piece of black pudding, small sausage and bread at a Spanish restaurant. Drinks were tap water!!!! The next stop was waiting outside a Beigel shop while our guide went inside and picked up 1 small bagel which we had to share. No drinks!!!!! Next stop was waiting outside a pizza shop while our tour guide went in and picked up a very small dessert pizza with Nutella filling. No drinks!!!!! The next stop, a chocolate shop where we went in and selected 2 truffles each. No drinks!!!!!! The next stop we were waiting outside a Bangladeshi shop while our tour guide went in and picked up 2 cold samosas, how were we supposed to heat them….staying in a hotel. It was either give them to our guide or put them in a bin. No drinks!!!!! By this time it was 2.5 hours out of 3 hours of our tour and we had 1 GLASS OF TAP WATER. We asked our guide where were the drinks and she said we were going to a craft beer shop for a small sample of 3 beers. We paid $248 for this tour which was just a walk around East London and if I was really generous about $40 worth of average food and drink. We are both bitterly disappointed and disgusted with what we experienced on this tour and it did not come anywhere near what is stated in the offer when we booked. Be careful of what you pay for and do not go on this tour. A definite let down.

star star star star star
Eddie is a fantastic guide, informative, funny, and personable. He made us feel at home in a foreign city. This tour is a great mix between history, art, and food. I would highly recommend.

star star star star star
We've booked a tour on our first day in London and it was probably the best thing we could have done. Our guide, Alexis, was lovely and made everyone comfortable with funny jokes and interesting stories about Brick lane and around. The food was delicious and generous. We really enjoyed the tour and will hopefully come back soon for another one !

star star star star star
A brilliant, well paced tour with a six person, international group of very interesting and friendly people led by Eddie, the excellent guide. Lots of interesting and quirky historical information and examples of many different types of street art along with very varied and delicious food and drink. Thoroughly enjoyable.

star star star star star
I booked a school trip with Eddie for the East End of London Food Tours. Our students loved seeing a new area filled with street art and culture. Eddie was a fantastic tour guide and kept the students engaged and was very knowledgeable about the area. The students really enjoyed their trip and have been talking about it ever since. Thanks Eddie!

star star star star star
We had a fantastic tour! Our guide, Eddie, had so much information to share. He’s a great story-teller, making each stop interesting and kept us engaged. He got-to-know all of us on the tour, so it seemed personalized to our needs. Highly recommend!
Previous Next
keyboard_arrow_up