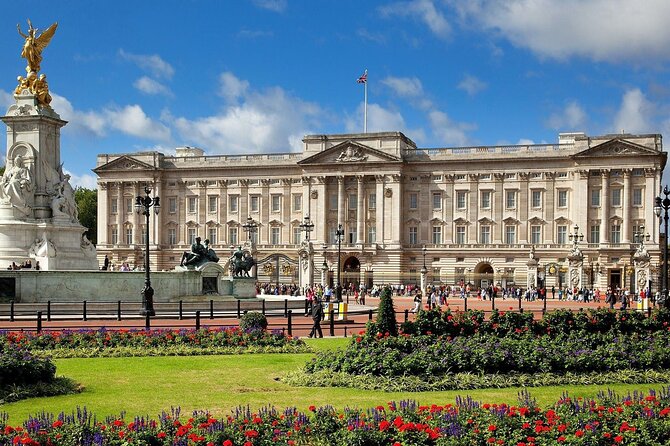 Join this London walking tour of the British Royal Family and Royal Palaces!

At Buckingham Palace you'll discover the history of this architectural masterpiece, the King's and Queen's who have lived there and spot the famous Royal balcony.

You'll visit St James's Palace and discover the Royal Family member who lives there today, hear the story of Henry VIII and his six wives and why a Royal proclamation makes this the most senior palace.

You'll also see where Prince William and Prince Harry grew up, get close to Royal residences including Clarence House and visit Pall Mall to find the Royal Family's Favourite Shops.

As you go you’ll stroll through the beautiful St James’s Park, visit Horseguards Parade - home of the Royal Horseguards and find out which King's mistress outwitted the Royal Family.

Finish up outside Westminster Abbey - home of Royal Coronations, Weddings & Funerals - the perfect place to end a London walking tour that will allow you to discover all things royalty!

INR 788
p.p. onwards
Itinerary
This is a typical itinerary for this product

Get amazing photos and learn about the most famous of all the British Royal Palaces including how many rooms are inside, see the Royal balcony and what happened when a man broke into the Queen's bedroom! Plus you'll be able to see if The Queen is home!

See this historic Royal palace and find out which notorious King built the Palace, the Royal Family member who lives inside it today and why a Royal proclamation makes this the most senior Royal palace of them all.

See this 19th Century Royal Palace and discover which famous London architect built the house, when the Queen chose to live inside and how it was the former residence of both Prince William and Prince Harry!

Discover Lancaster House and find out which former Royal Family member this Royal Palace was built for, why Queen Victoria thought it was better than Buckingham Palace and it's links to the film and tv industry.

Visit Horseguards Parade to discover the Royal horseguards, the Royal event of Trooping the Colour and why we celebrate the Monarch's birthday in June even though its not their birthday!

Discover the Houses of Parliament and find out why it's actually a Royal Palace, how it was previously the home of the Royal Family as well as gaining an insight into how the British Parliamentary system works today and why Guy Fawkes tried to destroy the building in 1605!

See the magnificent Westminster Abbey and the home of Royal weddings, Royal funerals and Royal coronations! You'll find out about the wedding of Prince William and Kate Middleton, Princess Diana's funeral and the process behind the Queen's coronation!

star star star star star
Did this tour with Mike was was able to tell us about all about the Royal Family and show us where the crown is filmed. We particularly enjoyed going inside the hat shop that sells lots of the royal hats.
Previous Next
keyboard_arrow_up