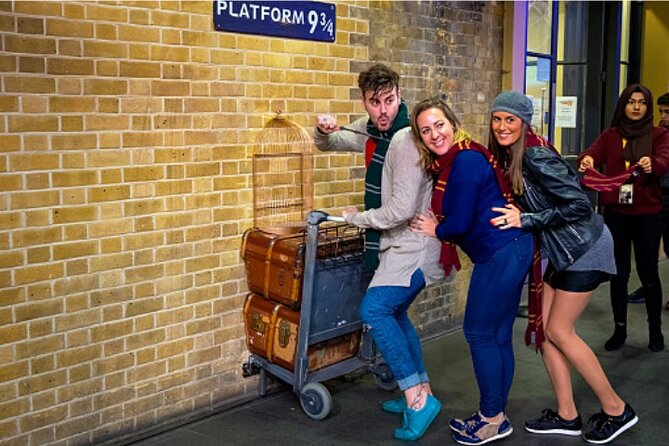 Join your fellow wizards & witches and follow in the footsteps of your Hogwarts heroes on the best Harry Potter Tour in London!

You'll visit real filming locations from the Harry Potter films including the entrance to the Ministry of Magic, see where Harry and Ron flew the car to Hogwarts in the Chamber of Secrets and follow the path of the Death Eaters as they destroyed London in the Half-Blood Prince!

Along the way you’ll delve into wizarding London and discover the secrets behind the books including the streets that inspired Diagon Alley and Grimmauld Place and get your photo taken with Hedwig at Knockturn Alley. Plus you’ll visit the Palace Theatre - home of Harry Potter and the Cursed Child - and discover one-of-a-kind Harry Potter memorabilia and real spell books!

With lots of Harry Potter trivia, secrets and games, this Harry Potter tour of London finishes up with a visit to an official Harry Potter shop and a magical photo opportunity at Platform 9 ¾ at King’s Cross Station!

INR 788
p.p. onwards
Itinerary
This is a typical itinerary for this product

Find out about the background of J.K. Rowling and why Craven Street has links to Grimmauld Place - home of the order!

Visit the home of UK government and the filming location for the Ministry of Magic in two Harry Potter movies!

Visit the centre of London at Trafalgar Square, relive the path of destruction of the Death Eaters and recount the Harry Potter and the Deathly Hallows film premiere!

Explore this hidden and historic London street commonly regarded as the inspiration for Knockturn Alley!

Visit London's most magical street and the inspiration for Diagon Alley!

Visit Shaftsbury Avenue - the home of the worlds theatre industry and discover Harry Potter and the Cursed Child!

Find out about J.K.Rowling's biggest mistake!

Find the spot where Harry and Ron flew the car to Hogwarts!

Visit King's Cross Station, discover where Harry and Ron boarded the train to Hogwarts and have your photo taken at Platform 9 3/4!

star star star star star
Great tour with Mike, exploring the more unseen parts of London and learning not just about Harry Potter filming, but also other films and history in general. Would recommend this tour to anyone

star star star star star
Absolutely fantastic.Tour guide was great. It was authentic, can imagine why the author based her stories in the places she did. Absolutely loved the feeling walking through the site

star star star star star
He had a great time! Mike, our guide, is brilliant. It made the tour interesting and kept alive the energy and the magic. The mesh with London history was amazing and the little advise he gave us were a treat. I would recommend this tour to any HP fan and not.

star star star star
It was interesting going to the alleys, streets and buildings that were inspiration to the places described in the books. We ennoyed the historical background given and best of all - going to platform 9 3/4...

star star star star star
Mike was very informative and made the walk incredibly interesting. I told him that I was interested in history and he told me of other places to go in the city that would be of special interest to me.

star star star star star
This was a wonderful Harry Potter walking tour. Our tour guide was Mike. He was so nice and fun. He took us all over the little areas of London. We walked through different alley ways where JK Rowling got her inspiration for incredible Harry Potter series. We saw where Sirus Black's house was filmed, where the leaky cauldron got its inspiration. This is sure a tour for Harry Potter fans and if you want to see London. I definitely recommend this tour. The tour ends at Platform 9 3/4. KingCross station where you can choose your house scarf and take cute photos. Thanks Mike. -its levosa-

star star star star star
Mike was excellent, knowledgeable fantastic, made you feel at ease. Chatted not only about Harry Potter but many other things. Will look into other tours. Was blessed with lovely weather as well was a bonus and extra bonus was our own personal tour as due to 6 other people cancelling half hour before hand so it was just Mike, me and my husband. Have told my friends already about the tour and how good it was. What more can I say people look into booking tours with this company you wont be sorry. Awesome Awesome Awesome.
Previous Next
keyboard_arrow_up