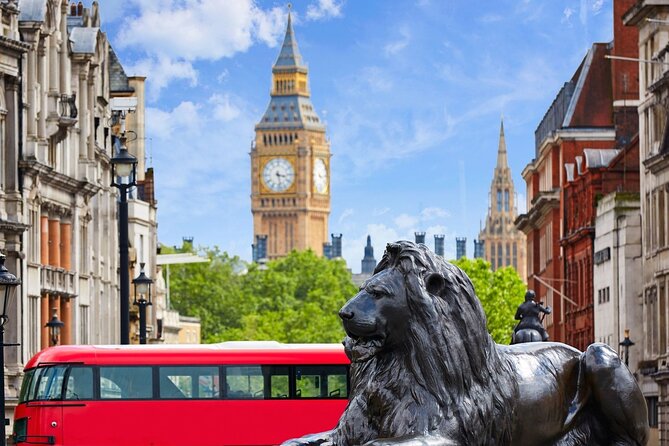 See 30+ of the best London sightseeing spots on the ultimate London walking tour!

On this exciting London walking tour you'll start in the City of London and explore 2000 years of history with famous London sights including:

After a quick lunch stop (own expense) you’ll then take a journey on the famous London Underground to visit Westminster and see even more of the best London sightseeing spots including:

Led by a local London tour guide, the tour uses photos to bring the stories of London to life in a relaxed atmosphere (no boring lectures!) allowing everyone to participate in the tour with questions, trivia, great photo opportunities and a lot of fun!

INR 1,182
p.p. onwards
Itinerary
This is a typical itinerary for this product

Start your tour in the City of London and discover how London came to be and why a Roman arrival 2000 years ago changed the course of the land forever.

Discover St Paul's Cathedral and one of the most beautiful buildings in London. You'll find out the history behind this magnificent cathedral, the story of London's greatest architect and the significant British events that have taken place within it.

Learn about Mansion House, the Lord Mayor and former uses of one of London's most iconic houses.

Get up close to the Bank of England and find out why the Scottish and French are responsible for it, what makes their bank notes different and how to access a gold vault worth £200 billion inside!

Stand in front of the Royal Exchange and discover how it was transformed from the main financial hub of London into one of finest luxury shopping and dining outlets in the world.

Enter the most beautiful market in London and discover how this 14th century market originated, how it's changed over time and who made it's beautiful roof. Plus find out what links it to Harry Potter!

See the Sky Garden and its relation to a walkie-talkie!

Learn the story of the Great Fire of London and how it devastated the city. You'll find out what caused the fire, who was responsible and the unique way that the fire was extinguised.

See London's iconic River Thames and take great photographs alongside it with many of London's most famous attractions in view.

See the famous London Bridge and discover why it kept falling down!

Discover the incredible history of the most iconic British warship!

Get incredible photos of The Shard - the UK's tallest building!

Get great photos of City Hall - home of the London Assembly and built by one of the 21st centuries greatest architects!

Get amazing photos of the iconic Tower Bridge and discover why it was needed, how it was built and the famous family responsible for its construction.

Get up close to the Tower of London and the most historic landmark in London. You'll find out how it is used as the home of the Crown Jewels, stories of imprisonment and executions whilst discovering the purpose of Beefeaters and Ravens along with how to be a guard for the Queen!

Touch the real London Wall - built by the Romans over 2000 years ago!

After a short tube ride you'll arrive in Westminster and discover how this 'new' part of London came to be and the influence of King Edward the Confessor.

See the magnificent Westminster Abbey and the home of Royal weddings, Royal funerals and Royal coronations! You'll find out about the wedding of Prince William and Kate Middleton, Princess Diana's funeral and the process behind the Queen's coronation!

Discover the Houses of Parliament and find out how it was previously the home of the Royal Family, how the British Parliamentary system works and why Guy Fawkes tried to destroy it in 1605!

See the worlds most famous clock and discover why it was built, who Ben really is and the unique purpose it has for troubled politicians!

See the London Eye and one of the most famous landmarks in the world!

See Horseguards Parade and the home of the Household Division of the British Army. Plus, subject to availability, get your photo taken with the Queen's horse guards and her famous horses!

Visit the iconic Trafalgar Square and discover why it was built and its links to Big Ben. You'll also learn about Nelson and the Battle of Trafalgar, Edwin Landseer's famous lions and the unique reasons that the square has been used for over the years.

See the Admiralty Arch which links The Mall and Buckingham Palace to the rest of London.

Walk down The Mall - the Royal driveway to the Royal palaces!

See St James's Park - owned by the Royal Family and discover why it was uniquely used by King Henry VIII, James I and Charles II.

See this historic Royal palace and find out which notorious King built the Palace, the Royal Family member who lives inside it today and the significant role it has in the death of the King's and Queen's of England!

See this 19th Century building and the current home of Prince Charles! Discover which famous London architect built the house, when the Queen chose to live inside and how it was the former residence of both Prince William and Prince Harry!

Discover Lancaster House and find out which former Royal Family member it was built for and why Queen Victoria thought it was better than Buckingham Palace!

Finish the tour by getting up close and discovering the most famous of all the British Royal Palaces! You'll discover how many rooms are inside, see the Royal balcony, learn how to do a 'Royal Wave' and what happened when a man broke into the Queen's bedroom! Plus you'll be able to see if The Queen is home!

star star star star star
We thoroughly enjoyed our sightseeing tour. Mike was such a personable knowledgeable guide and we were so lucky to have taken this tour with him. During the walking tour we were able to see many of the highlights of London and hear from him all the history behind what we were seeing.

star star star star star
Book this tour! Our group had a great guide and he took the time to explain each stop on the tour in detail. You get to see so many famous places on this tour in one day! The nice thing about seeing so many places is that you can then book a follow up tour depending on your interests (e.g. if you want to tour the Tower of London) if you choose to. Wear comfortable walking shoes and pack a raincoat and/or umbrella in case it rains.

star star star star star
We were there when the Queen passed away. The crowds were beyond manageable, and there were protests. The guide, Mike, was excellent. With all the chaos, he made our tour fantastic. I would highly recommend this tour. Do it first when you arrive in London. You not only learn about the city but have an opportunity to learn how to navigate it from professionals like Mike.

star star star star star
A good understanding of the history of London without having to read the books. Mike’s knowledge and explanation is clear and elaborate. The group is also international

star star star star star
The tour guide Mike was exceptional. He was very knowledgeable and we throughly enjoyed the tour. This is one of the best tours. Highly recommend it

star star star star star
Mike was an amazing tour guide who brought us on a 5 and a half hour tour of London. Although it was a long tour, the walking was easy. We saw all the major sights London has to offer and Mike relayed information to us about the history of these sights as well as some fun facts. He also seamlessly answered questions. Would highly recommend this tour to anyone coming to London.

star star star star star
Coming up from the underground station to see Big Ben right in front of us! It gave us a chance to orient ourselves and decide what we wanted to return to for a closer look.
Previous Next
keyboard_arrow_up