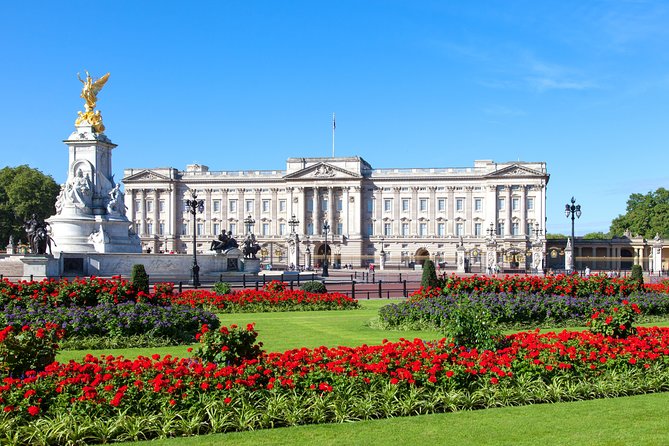 This private walking tour of the heart of historic London is perfect for new or experienced travelers who want something really special and unique.

Your private expert guide will showcase some of London's top attractions, including the Houses of Parliament, 10 Downing Street, Trafalgar Square, and Buckingham Palace while discussing the significance behind these world-class landmarks. From Westminster Abbey, the site of every English coronation for almost a millennium, to the grand spectacle of the elite guards outside the royal palaces, you'll see the city in a whole new light after this incredible and enriching experience.

In the afternoon, we'll show you gems such as St Paul's Cathedral and the Tower of London, showing the broad span of the history of this metropolis.

INR 19,192
p.p. onwards
Itinerary
This is a typical itinerary for this product

Enjoy external views of this stunning landmark, and learn about how the country has moved from an absolute monarchy to a world-renowned democracy.

You’ll get fantastic exterior views of the huge church that has played host to English coronations for almost one thousand years, as well as the venue for numerous royal weddings.

See exterior views of the home of Britain’s Prime Minister, and learn how the office has evolved over the centuries.

Discover the site where one of England’s kings was beheaded as the country was torn apart by civil war.

This iconic public space in the centre of London includes monumental sculptures, hidden secrets, and, of course, Nelson’s Column.

See the Changing of the Guard from the very best spot, and march along the elite soldiers as they take part in a world famous royal tradition (weather and military schedule permitting). Enjoy exterior views of a palace built by Henry VIII for one of his six wives, Anne Boleyn.

Pose for perfect pictures outside the most famous official residence of the Queen and her family, hearing tales of palace intrigue and daring break-ins.

Enjoy exterior views of one of London's most iconic churches with your private expert guide. Entry not included.

See the stunning and modern bridge that was divisive and controversial when it was first built (as well as being called 'wobbly'), but has now become a cherished part of the Thames!

End your tour with exterior views of the stunning Norman castle that has dominated the skyline for the last 1000 years (entry not included).

star star star star star
The Churchill war room. Jack with Bespoke Tours was extremely knowledgeable and rally took the time to know our family and tell us valuable information!

star star star star star
The vast knowledge of our tour guide was invaluable to an inspirational afternoon. He accompanied historical facts with a fun outlook and was the best afternoon we had in london. Will return and will do another tour next Xmas Thank you Bespoke

star star star star star
Just magical and enchanting from beginning to end! There is no way, we could’ve covered this much ground and got this much information any other way. We had agreed to a highlights of London tour when I booked. But as the day of our tour came up, we found we had done some of the sites. Our guide, Jack, had no problem in reworking the day to suit our needs. He was SUCH a wealth of knowledge! Knew exactly where to be at what time and place to capture the best of Change of Guards. He kept up a lively stream of fascinating trivia as we walked around. My 12 yo son is very interested in all things Harry Potter and Jack engaged him at his level with Quidditch details, movie locations and background information throughout the day. We went to the National Gallery and it was so enlightening to get his input on the various artworks. My 20yo was listening in rapt attention and taking photos. I can tell you that we visited the British Museum by ourselves, a day prior and it was not the same. At the Tower of London, Jack noticed that my son was fascinated by the weaponry and tailored our visit to accommodate his interest. We were with him for 7 hours and could’ve kept going. My 20yo commented on the way home that the 12yo had not once taken out his phone the entire day. I mean if that doesn’t say it all…

star star star star star
Where do I even begin with SO much to say? I have been on tours all over the world in several countries, Jack at Bespoke Britain is far and away the greatest tour guide that I have ever had the pleasure of booking with. I selected the walking tour for this review, but we did nearly everything on our trip with Jack and each adventure was better than the last! I proposed to my long term girlfriend at the British Museum, and Jack went FAR ABOVE AND BEYOND in every aspect of this trip to make the engagement surprise as perfect and easy as possible! Jack is so intelligent and gracious, he tailored our adventures around our wants and passions, to make this trip a nonstop edge of our seat adventure!! Jack joined us for shopping, museums, walking tours describing all of the history & landmarks, WONDERFUL dining/restaurants, and even riding about the city navigating the TUBE!! For the engagement, Jack helped to choose the PERFECT spot in the British Museum to pop the big question, and even made an appointment with a local PROFESSIONAL photographer to follow and SECRETLY take pictures of the engagement as it happened!! Jack asked us which things we were most excited to see in each museum & exhibit, and tailored a perfect route focusing on those things! When we told him we were interested in seeing art by Francis Bacon, he discovered that there was a PRIVATE Bacon collection and booked us an appointment to view it!! While Jack is an EXPERT in ALL THINGS LONDON, he hired an Art History professional to join us at the museum to describe the paintings' history & significance which brought them to life like I've never experienced before! Jack was a consummate professional, always snapping fantastic pictures for us and even a bunch of pictures when we weren't looking for some fantastic candid photos that really captured the moment. While he stayed by our side assisting with anything he could think of most of the time, he also equipped us with the skills and knowledge to navigate the city on our own so it was easy to do things without him in a foreign country. ANY time we had ANY difficulty, Jack was at the ready with advice or help to make everything as easy as I've ever experienced whether or was trouble getting an Uber at 11pm or where to find a particular gift to purchase. In addition to all of this, Jack knows so many incredible places in London to do anything you can possibly think of! I asked him about a nice restaurant to celebrate the night of our engagement - not only did he find multiple to let me choose from, he planned the location into our tour route and even MADE RESERVATIONS for both drinks and dinner at the most incredible place called the SKY GARDEN with unbeatable breathtaking views overlooking the city all lit up at night! I truly cannot say enough about this PERFECT surprise engagement trip, and it was all made possible by my true FRIEND, Jack. We had such an incredible time that we are already planning to come back to London as soon as possible, and will once again use Jack as our guide and friend to dig deeper into London as we've only just scratched the surface of what he and the city have to offer!! If you're looking for someone to guide you through this magical city, I can promise you that there is NONE BETTER than Jack at Bespoke Britain!!!
Previous Next
keyboard_arrow_up