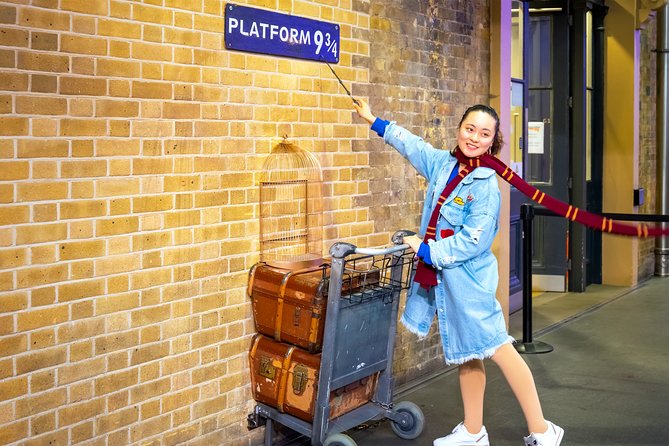 Time to get your wands ready and prepare for magical adventures, with this unique and luxury privately guided tour of Harry Potter sites in London! You won't need to apparate, use floo powder, or take your chances with the Knight Bus - you'll be travelling in comfort and style in your privately chauffeured upgraded London black cab, with WiFi on board, larger windows for better views, and a fantastically knowledgable and friendly driver to complement your private expert Harry Potter guide. You'll see locations used for filming, such as Borough Market, St Paul's Cathedral, and King's Cross, as well as having a chance to see some of the inspirations for this globally-adored franchise. You'll also get your very own wand that you'll be able to take home with you! Just keep it handy in case we bump into any Death Eaters along the way...

INR 27,729
p.p. onwards
Itinerary
This is a typical itinerary for this product

Kick off your tour by seeing some fantastic Harry Potter filming locations and the historic landmarks that surround them, such as the Ministry of Magic, the sinister Knockturn Alley, and the route of the legendary Knight Bus! You'll also see the original inspirations for settings like Diagon Alley and hear the inside story of the creation of the Boy Who Lived. And don't forget to roll out the red carpet as you relive the excitement of the world premier of the final film in the stunning Trafalgar Square!

See one of two locations in the city that have played the role of Diagon Alley in the Harry Potter film series, and have a chance to pick up some tasty treats of your own. You'll also learn all about the fascinating history of this 1000-year old market with your private expert guide.

Walk across the infamous 'wobbly bridge' as you hear about one of the most action-packed moments in the series - the devastating Death Eater attack on London.

Few films get permission to use St Paul's Cathedral as a location, but it's unsurprising that Harry Potter was one of the exceptions. Learn about the role St Paul's Cathedral has played in successive Wizarding World film series, and marvel at exterior views of an icon of the London skyline.

Step back in time as you recreate the very first steps of the boy wizard into the magical world. Leadenhall Market was the very first location used for Diagon Alley, and in real life this historic market in the heart of the city retains all of the beauty and elegance depicted on the screen!

Time to catch the Hogwarts Express! Your luxury London black cab will whisk you up to King's Cross Station, where you can hear the stories of how this location was chosen to be so important to the plot of the books, and pose for pictures with the famous trolley prop at Platform 9 3/4! Plus, you'll get the chance to browse some special magical souvenirs at the unique gift shop within the station.

Westminster, London SW1A 2JR, UK
Traveler pickup is offered
We come to you - just let us know where to pick you up from and we'll apparate right to your doorstep!

star star star star star
5 Stars all the way for Jack and his team of guides!! Bespoke Britian allowed us to visit London our way on our schedule! We booked 3 days of private tours with them and found it all time and money well spent.
Previous Next
keyboard_arrow_up