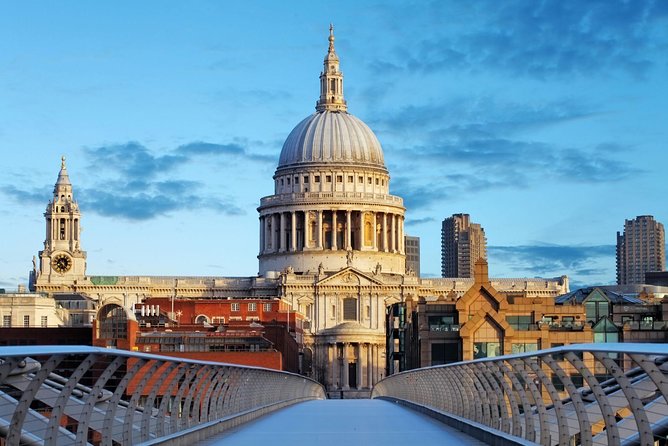 Best of London Including Tower of London, Changing of the Guard, with a Cream Tea or London Eye Upgrade

See the best that England’s capital has to offer on a full-day city tour of London! Explore St Paul’s Cathedral with a guide, then make a photo stop at Westminster Abbey. Watch the must-see Changing of the Guard ceremony outside Buckingham Palace and have some free time for lunch around the UNESCO-listed Tower of London. Finish up with a sightseeing cruise down the River Thames. If you want to see even more, upgrade to one of two activities: a cream tea at Harrods restaurant or a London Eye flight.

Tour with Cream Tea at Harrods 07:45
Enjoy a Cream Tea with a glass of Sparkling Wine at Harrods, see Big Ben and the Houses of Parliament.

Tour with London Eye Flight 07:45
Take a flight on the London Eye, offering spectacular views of London from high above the River Thames, the tour ends here at the London Eye.

INR 10,926
p.p. onwards
Itinerary
This is a typical itinerary for this product

Visit Tower of London and see the famous Crown Jewels

Enjoy the view from the river

First group to enter this magnificent cathedral rebuilt by Sir Christopher Wren after the great Fire of 1666.

See the changing of the Guard

Drive past Royal Courts of Justice

See London Bridge from the river

Built in 1894. The bridge crosses the River Thames close to the Tower of London and has become an iconic symbol of London. You will enjoy the view from under the bridge!

Enjoy the view from the river

star star star star star
Tour was great. On time. Guide was informative, however he only had conversations with people of certain ethnic backgrounds. Which was a little disturbing. Overall you get ti see alot if you only have a short stay.

star star star star
Good overview of London but a little long. Shorten the trip by an hour or so. Less time on bus in shopping districts.

star star star star
Seeing London come to life through a variety of sites that we had only heard about before. Good over all view of the city.

star star
Our tour guide was good. Great personality. Knows his history. However, the size of the group that was assigned to him was way too large to be managed by one person alone. It was hard to get the whole group together. It took forever for the group to get off the bus. We spent more time waiting then enjoying The tour. At one point, the tour guide was trying to shepherd people across the street. The light turned red and he ordered a group to stop. The group is too large to be able to hear him. Someone was nearly hit by a car. The group size was not only an inconvenience from a quality standpoint, but also a safety standpoint.

star star star star star
We were only in London for 3 days so doing this tour made sense. We saw what felt like the whole city in a day. Our guide James was very knowledgeable and made the tour interesting, don’t hesitate and book this tour!

star star star star star
We had a wonderful tour and our guide was so pleasant and knowledgeable. The sites were lovely. The only thing I would have changed was the weather. The tea at Harrods was lovely!

star star star star star
I enjoyed the tour. It was a full day seeing all of the sites. We had a bus and a good tour guide who was very knowledgeable. I believe it was worth it and don’t believe we could have accomplished so much in one day on our own Faisal next to the London Bridge What else is there to say? You simply have to see it to appreciate its reason for over-photo-exposure. Changing of the guard at Buckingham Palace. St Paul's Cathedral - Separate admission to go up into the gallery. Guards at the Tower of London this is me and our wonderful tour guide. Our first tour was everything we expected!