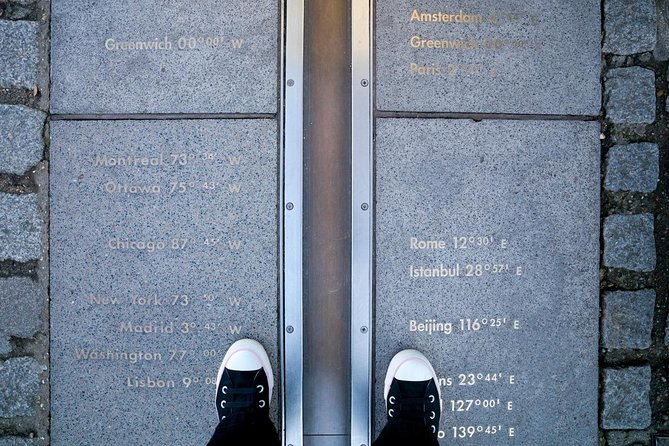 A visit to London is not complete without visiting the Royal Observatory Greenwich where you will stand astride the Prime Meridian Line, with one foot in the east and the other in the west, at the home of GMT (Greenwich Mean Time). Walk in the footsteps of the Astronomers Royal, discover their stories, and experience the past, present and future wonders of astronomy, space and the stars. Enjoy dramatic views of London across Greenwich Royal Park, the City of London and the River Thames.

Your visit will begin in the Meridian Courtyard where you will stand astride the Prime Meridian Line, with one foot in the east and the other in the west at the home of Greenwich Mean Time (GMT).

The tour will take you through Flamsteed House where you will walk in the footsteps of the Astronomers Royal. Visit the Octagon Room which was designed by Sir Christopher Wren and is one of the best preserved Wren interiors in London. See Harrison’s clocks, the inventions that changed the world. Discover the Shepherd Gate Clock, mounted outside, which was the first clock to show Greenwich Mean Time to the public. Learn about the discoveries of great scientists and inventors based at or associated with the Royal Observatory, including Harrison, Newton, Halley, Bradley, Maunder, Harrison, Airy, Einstein.

The bright red Time Ball on top of Flamsteed House is one of the world’s earliest public time signals and was first used in 1833 and still operates today. Don’t miss the Great Equatorial Telescope, located in the huge iconic onion dome, which gave astronomers new views of the universe over 100 years ago.

Located in the UNESCO World Heritage Site of Maritime Greenwich, the National Maritime Museum and the Queen’s House are both located within a short walking distance from the Observatory and are free to visit. Cutty Sark, the world’s sole-surviving tea clipper is now an award-winning museum and visitor experience and is a must-see when visiting Greenwich.

star star star
Must see when in Greenwich, but quite crowded when we visited. Maybe the view and the walk there are the most interesting parts.

star star
Very underwhelmed- went mainly to see the planetarium which had very little to see in terms of exhibits, we paid to see a show. We were forced to wait for 15 mins for no apparent reason in a queue before being seated, and the quality of the talk itself was poor. Dont bother

star star star star star
Science nerds will love this place. Lots of history of astronomy and timekeeping. The museum is small, so shouldn't take too much time. The feature history telescopes and clocks, but also show some of the history of the building itself, and the chain of royal astronomers, going back to the 17th century. Easy to get to via Docklands Light Railway (DLR), Uber boat, or tube. There is a tunnel that allows you to walk under the Thames. At the train station, you can find souvenir shops that are about half the price of central London.

star
Booked one adult and two child tickets for Teds space adventure, £20 in total, My 4 year old grandson used the toilet before we went into show, after 10 mins of the show he needed to go again, due to drinking a lot of water because of hot weather. He was getting upset and distressed, I took him to the toilet with my other grandson and wasn’t allowed back in. A complete waste of money, I emailed and explained, I was sent the T&C’s. Was I expected to let him sit in his seat and wet it, crying !!!

star star
I was really looking forward to visiting the Royal Observatory, but overall found the experience to be disappointing. The audio tour wouldn't connect through my phone (I'm from the U.S.), where as my cousin who is from the U.K. had no problem connecting to the audio tour. My internet connection was working perfectly prior to arrival, so I'm not sure why it suddenly cut out at the Royal Observatory. I wish they had provided their own audio players rather than relying on international guests to have access to the internet. We also went to two shows at the planetarium, but they seemed geared more towards children rather than adults. I had been expecting something more along the lines of the American Museum of Natural History (NYC) planetarium shows.

star
Where do I start. If your disabled don’t bother. Before we arrived we were aware of the enormous hill that you are required to climb before reaching the observatory. We had arranged a solution to this as a family. We then walked to reception where we met with the worst customer service to have the misfortune to meet. We made them aware of my fathers mobility scooter and where we had put it (it should also be made aware that we asked three different sources about access to a car park and all of them told us that there wasn’t one, there is a car park at the top of the hill and quite a considerable one at that). We then informed them about how we had overcome their poor arrangements for disability access (apparently they run a shuttle bus during times of high traffic, not sure when this would be but if it isn’t the end of August and in the school summer holidays then I can’t imagine when it would be). To further my point, when we asked them about the situation we were met at RECEPTION with shrugged shoulders and told it was our own problem. I wouldn’t have minded that it was our responsibility but it was the sheer lack of customer service and lack of any help that we received that really made me and the rest of my family feel like because we had a disabled member of the family that we couldn’t visit. In the end my mother and I walked around the observatory alone while my father and brother were essentially told to go and stand by the scooter because it couldn’t be left alone. To reiterate, I don’t feel what we were asking was in any way unreasonable as the area of the destination that we wished to look at wasn’t inaccessible for disabled individuals as we only particularly wished to look at the line. It was simply the treatment we received as a response that we found utterly despicable. I can’t even say that the customer service was shocking because arguably there was none, just too poorly trained individuals with no people skills who simply made us feel like we shouldn’t be able to enjoy the observatory and the views that come with it because of my fathers disability.

star star star
Let me start by saying that I do not agree with leaving negative reviews unless they are truly warranted. It's obvious that I was uninformed and unprepared for this visit but in my defense, I haven't read a single review that points the issues I faced. With this in mind, I have rated the Royal Observatory as AVERAGE but I really wanted to put down POOR. There was LOTS of walking over uneven payment with absolutely NO benches for periods of respite. We arrived by Thames clipper, which was great and entered the Observatory's beautifully shaded central grounds. It was confusing that we couldn't buy tickets at the Welcome Center but instead had to buy them online. Then we had to leave this lovely area and walk through the town of Greenwich over un-maintained city sideways to enter the Observatory Gardens. Once in the Garden, there is a long walk up to the Observatory. There were NO benches along the way?? None, not a one. And believe me they are much needed. Then you have a straight up climb the last 100 yrds to top the hill (which is to be expected), and I mean straight up! Once at the top, there is the Prime Meridian and gorgeous views. But then you have to face the return journey without a respite! Not a place for anyone with any kind of mobility or health issues.

star star star
The planetarioum show was good (although we were queued for 15 mins, easyJet style, for no apparent reason before being let in) but the museum itself was very small , the choice in the cafe was poor. For the price we were very underwhelmed (compared to the Tower of London which was only a little bit more expensive and completely brilliant) The view is epic (but that’s free!)
Previous Next
keyboard_arrow_up