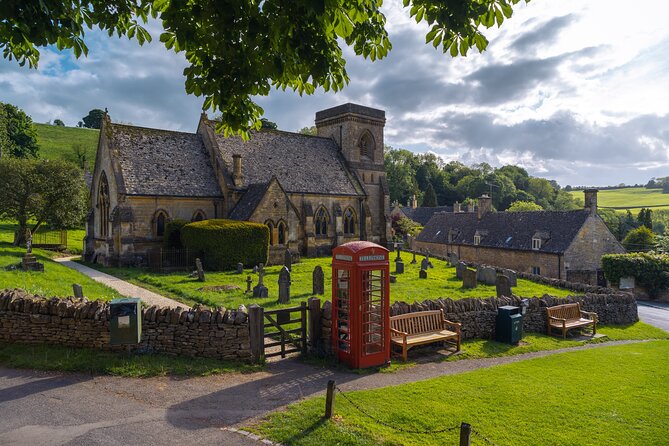 Experience the British countryside of the Cotswolds, an area known for its green landscapes, charming villages, and honey-coloured stone cottages on a private tour without worrying about missing the must-see places. Avoid the hassles of a DIY or large-group trip and relax on a luxury private tour of must-see towns and villages. See the historical homes of Stow-on-the-Wold and marvel at the honey-stoned Broadway and other precious villages like Chipping Campden, Bibury and Snowshill.

- Spend at least 6 hours exploring the best of the Cotswolds!
- Visit iconic villages, historical towns and the beautiful countryside!
- Have free time to explore each location!
- Travel in a luxury car along the country lanes!
- Learn about history and photography from your knowledgeable local guide!

INR 30,957
p.p. onwards
Itinerary
This is a typical itinerary for this product

Our meeting and the start point are Moreton-in-Marsh.

This ancient town has many beautiful buildings. From St James Church right through to Dover's Hill all nestling in tranquil and beautiful countryside. These beautiful buildings provide a plethora of architectural styles across the centuries and is both an area of outstanding natural beauty and a conservation area.

The Tower is an iconic landmark on top of the beautiful Cotswolds escarpment. It was the brainchild of the great 18thcentury landscape designer, “Capability Brown”. His vision was carried out for George William 6th Earl of Coventry with the help of renowned architect James Wyatt and completed in 1798. The location for the Tower was wisely chosen, a dramatic outlook on a pre-medieval trading route and beacon hill.

Snowshill, charmingly set with the Cotswold hills rising steeply around the village on three sides, is known for its exceptional unspoilt beauty and for the views over the Severn Vale to the west. An ancient road called Buckle Street crosses the parish and Snowshill Manor, owned by the National Trust, is a beautiful building in Snowshill with picturesque gardens outside and inside the amazing and eclectic collections of Sir Charles Wade: toys, musical instruments, clocks, bicycles, samurai armour and more. The beautiful cottage garden is a lively mix of architectural features, bright colours and delightful scents.

At nearly 800ft, Stow is the highest of the Cotswold towns, located on the Roman Fosse Way and at the point where several roads meet, hence an important trading centre. It has a long history, it probably dates from a prehistoric fortified settlement on top of the hill, and had a special importance in the English Civil War, the last battle was fought close by in Donnington back in 1646. St Edward’s Church, was used as a prison for the defeated Royalist troops, as it was the only lockable building in the town. Some of the damage sustained at this time can still be seen today.

The Market Square is large and impressive and testifies to the town’s former importance. It is surrounded by town houses, independent shops, antique centres, cosy cafes and inns all built in the mellow local stone, and it has been the focus of town life over many centuries, with the medieval market stocks at one end, the ancient market cross at the other and the impressive St Edwards Hall standing in the centre.

Lower Slaughter - the slightly macabre name comes from the Old English for 'muddy place' - are linked by the tiny River Eye, a tributary to the River Windrush.

A wander alongside the stream in Lower Slaughter seems like a privilege - people actually live here! Lower Slaughter Mill & café is well worth a visit - a mill was recorded her in the Doomsday Book of 1086.

Bourton-on-the-Water is a popular destination with gently flowing River Windrush running through the centre of the village and crossed by attractive little bridges. There is much to see in Bourton on the Water and it is suitable for visitors of all ages especially families; visit Birdland Park and Gardens – home to a wide variety of exotic birds including penguins, flamingos, macaws, emus and birds of prey; marvel at the incredible detail of the buildings in The Model Village – a 1/9th scale replica of the centre of the village; the Cotswold Motoring Museum has seven unique galleries housing a collection of vintage cars, a fascinating toy collection, exhibitions and children’s TV favourite little car ‘Brum’ or visit the Dragonfly Maze designed by Kit Williams.

Bibury is a charming, typically Cotswold, village just a 20 min drive from Bourton-on-the-Water. It’s easy to see why William Morris called Bibury ‘The most beautiful village in England’ – wonderful stone buildings strung out along the banks of the River Coln.

Arlington Row, owned by the National Trust, is one of England’s most iconic and photographed sites – it even appears on the inside cover of UK passports! Originally built in the 14th century as a monastic wool store, it was converted in the 17th century into a row of weavers’ cottages. The cottages are now lived in by National Trust tenants, with no public access to the cottages or gardens, although one of them can be rented out as a holiday cottage.

At the end of the tour, we will drop you off at the starting point. Depending on the road condition, it may take 20 to 40 minutes.

Moreton-in-Marsh GL56 0AA, UK
Traveler pickup is offered
I can pick you up from your chosen accommodation in the Costwolds. Please ask me!

star star star star star
This is the perfect experience if you're looking to get away from the other generic touristy Cotswolds tours. Cuma was very kind and accommodating and took us to many locations that would have been difficult to get to on our own or with a larger tour based on what we were interested in. He also has a great eye for secret photo-worthy spots. He was very patient with our group when we wanted to linger a bit longer at certain places! Lunch was at a great local spot that did not feel touristy at all. He was communicative and made sure we got everything that we could out of the tour, up until the very end!
Previous Next
keyboard_arrow_up