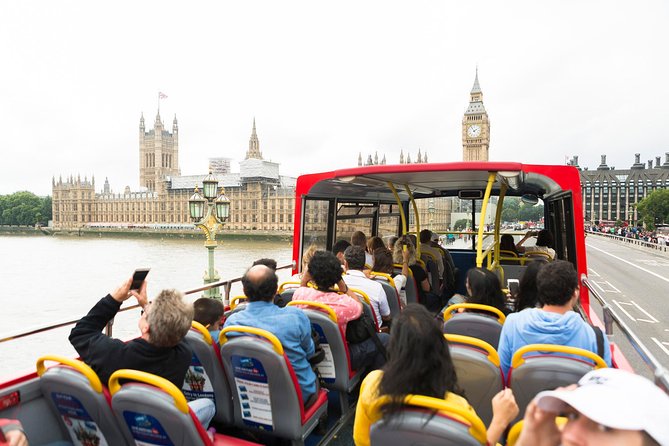 London Hop On - Hop Off Bus with River Cruise

Discover London in the most convenient and unique way. Experience either a 1 day ticket, 24 or 48 hour hop-on hop-off bus ticket. As you can hop on and hop off the buses as many times as you like during the validity of your ticket, you’ll be able to take your time to visit all London's tourist attractions. You can also just sit back and enjoy the full circuit. Whatever you decide, our buses will take you to the city’s leading highlights where you can get off the bus to discover them in more detail should you wish. Also available with an unforgettable Thames River cruise.

star star star star star
the person sold us the ticket at westminster was friendly and the bus was often. I recommend it its the best way to have an overview the commentary in Portuguese was very valuable too

star star star star
You can buy the bus tour without the boat tour included. Please be sure to add the boat tour. It is so worth it. I thought it was better than the bus tour. The busses are only open air at the top for about half the bus, so those seats are hard to get. It's a 50 50 chance you'll get a good view. Again, this is London, so it is likely to be raining as not. For some reason, we were asked to get off the bus and wait for another one more than once. You have to use up your bus tour time within 24 hours if that is what you purchased, but the boat tour is good for months. You catch the boat tour down at the Tower of London and it takes you down the Thames for some wonderful views and great photo ops. You get off back at the Tower of London. It's not that far from the Strand, so we took one of those cute little cabs back and forth.

star
Was sold the tickets under the impression people regularly get on and off the bus however was left standing for well over 6 stops so couldn't even listen to the tour. Then was left sitting downstairs where you can't see any of the sites anyway. Not worth the £74 we paid at all. Numbers should be limited, pure money grab. If you do want a bus tour go with one of the other companies where the staff aren't stood easily pulling tourists in.

star star star star star
Great way to see the main London attractions - our guide (Emma) was brilliant, she gave us so much incredible information about the history of the monuments, buildings, statues, etc., in such a fun way that would be easy to remember and we learned so much about our own capital city that we never knew before. Her knowledge was vast, she was genuine, friendly and very organised - helping people to hop on and off at the right times for places they needed next and giving directions as well. I would definitely recommend this experience!

star star star star star
This was a great way to get oriented and see the main sights and then decide what appealed in more depth. Upstairs on the bus outside offers a great view. The commentary is a bit thin on content but it was a good start to a London Holiday. Its very cheap to add a second day but we then used the Tube as quicker to get between places.

star
So I guess I would recommend buying a ticket at the bus as I had thought buying ahead on line would have been the most economical! However at the first stop I heard the woman quote 25 pounds to another customer , when I just paid $46 !! Then at one point they stop and I had time to run in a cafe to get an iced coffe but when I came out they ushered me on another bus with a different company! I spent almost riding around but never completed “the loop” and missed being able to take the boat tour because it got so late and I would have missed getting to the theater on time for my play!!! Very disorganized and BS pricing … at one stop a young girl asked to come on and wanted to know how much and who did she pay?! And the bus driver said , oh the girl just left go ahead and get on your ride is free !! Good for her ! But I’m out $46 and didn’t even get to do the boat ride !!

star
Bus was not at the stop. I didn’t notice that the windows on the bus were covered with a film on the bottom making it hard to see out. It was too cold and windy to be upstairs. So seeing what the commentary was talking about was impossible. Also the commentary was so elementary it was like they were talking to two-year-olds but the thing that bothered me the most was that we were told that we would get a trip in a boat down the Thames yes that’s true but only one way any of you want to go back you have to pay extra I felt it was a scam all in all.

star
Worst hop on hop off ever. More standing than driving. Never again. Too much traffic and too hot. Bus was standing in full sun for long time

star star star star
We did the Blue Route through Westminster and London City. The first part was Westminster and the tour was a tape that interrupted itself in mid sentence to talk about something else. Awful. At the start of the London City Tour ( stop 3) a guide, Emma, came on board and she was delightful, informative, funny, and engaging. If you can find out before hand if your guide is a person then take it
Previous Next
keyboard_arrow_up