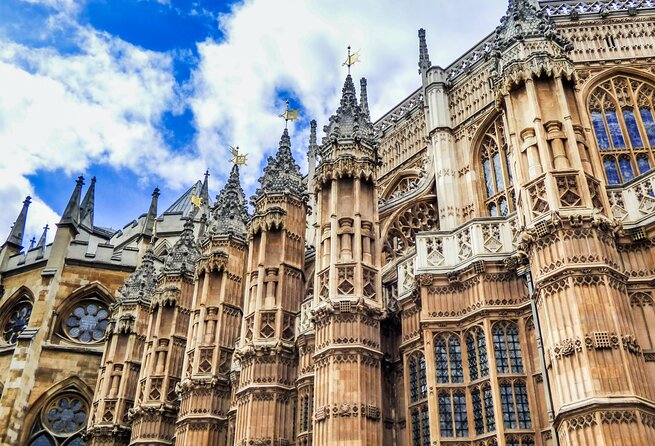 Discover Central London’s historical side by visiting Westminster Abbey, Buckingham Palace and Southbank, as you explore the iconic history of this city with our immersive private guide!

Narrated by local expert historians, we’ll follow in the age-old footsteps of monarchs and politicians, as we dive deeper into British history. Enjoy the trendy and photographic neighbourhood of Southbank, renowned for the London Eye, Shakespeare’s Globe, and multicultural street food stalls!

Explore the iconic key attractions at your own pace, such as the popular Churchill War Rooms, Cenotaph, Horseguards Parade, and Guards Memorial among many others.

Transport yourselves to a fantastic adventure of culture and history, as you travel back in time to walk in the footsteps of Britain’s most famous and infamous monarchs.

Note: This is a self-guided audio walking tour and does not include entrance tickets

INR 1,127
p.p. onwards
Itinerary
This is a typical itinerary for this product

Probably the most famous landmark in Britain, but few people actually know what Big Ben is.

The story of the fierce Celtic Queen who fought the Romans back in AD 61.

We trace the royal history of the palace and learn about another engineering marvel!

The first Lord Protector of England, but who was he & what was his story?

Are you ready for a deep-dive into the British parliamentary system.

A true patriot. Discover the man who led the country through the UK's darkest hour.

Take a peek down the street of some of Britain’s most famous residents!

Quirky traditions that have stood the test of time in Britain’s Parliament.

The efforts and brains that led Britain through some of its darkest times.

We pause at the memorial to pay regards to the lives lost in war.

The history of this beautiful Gothic church & how it continues to modernise.

We pause by the footguard's memorial at the scenic sight of St. James Park.

The story behind the royal red carpet & some of its current residents.

The Queen’s life guards, and a spooky tale of an event that happened here.

This is where the modern Southbank was reborn

We dive into the home of British theatre & explore controversy about the building.

A few funny stories about the South Bank's architectural triumphs (and disasters).

We learn about the world's oldest boat race: the Doggett's Coat & Badge.

A tale of three bridges, Queens, statues and Italian gangsters!

How did this power station evolve into a mecca for the arts?

The official London residence of the British Monarch has interesting stuff up its sleeve!

Hope you have your towel and flip flops ready, we'll discover London's only beach.

The birthplace of English theatre, its tumultuous past & the seedy South Bank.