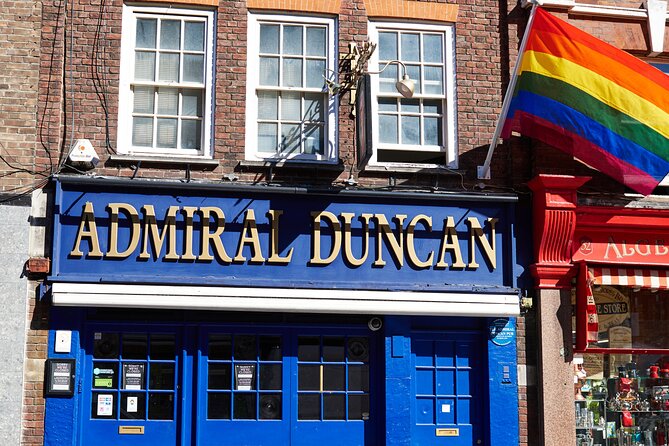 Visit the must-see sites in Soho, as you discover the cultural heart of this neighbourhood, famous for its history, struggles, and vibrant culture of London’s LGBTQ+ community.

Join us in this private immersive guide narrated by local historians, and explore the most famous historic buildings as well as the secret tales that live in this neighbourhood. Together, we’ll learn more about the true cultural gem that remains iconic to the LGBTQ+ community, the best places to eat London street food, and the most Instagrammable spots where you can take the perfect pictures.

Note: This is a self-guided audio walking tour and does not include entrance tickets

INR 375
p.p. onwards
Itinerary
This is a typical itinerary for this product

We start by navigating the complex history around this square

We delve deeper into the area's history

We stop by a relevant spot to discover its edgy history

We discover the popular and iconic artists and their backstories

We take a deeper look into London's Pride Culture and challenges

A cultural gem that is also iconic to the LGBTQ+ community

We stop for a pint and revel in the story of the amazing Ruby Venezuela!

star
Only suited for people with absolutely no familiarity with LGBTQ history. This is not a tour led by experienced historians. I abandoned the tour before the end.
Previous Next
keyboard_arrow_up