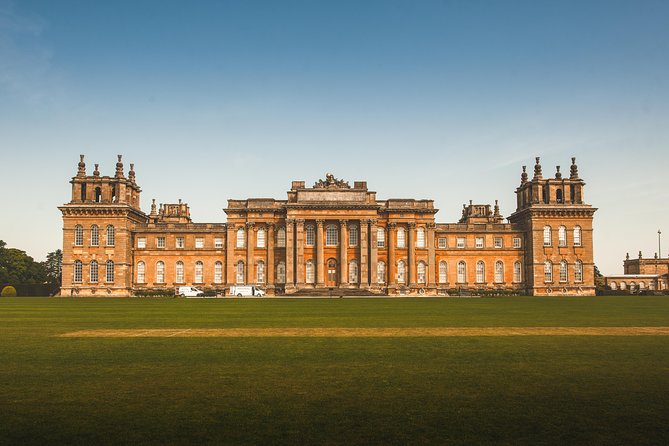 The thick-walled castles inspired Shakespeare's battle-torn tales. The narrow cobbled lanes kindled his love stories’ twists and turns. And the deep, green valleys encouraged him to write about monsters, myths, and magic.

On this adventure, we take you through the landscapes that sparked his imagination and his inspirational hometown of Stratford-upon-Avon.

But this tour isn’t just about the famous playwright.

You feel princely as you walk through the ancient hallways of Blenheim Palace. And you become snap-happy as you wander over the trickling rivers and peaceful hills of the Cotswolds.

Learn about Shakespeare’s inspirations and discover England’s most famous landmarks on this three-day small group tour from London.

Stop At: Rollright Stones, Rollright, Chipping Norton England
These are an ancient complex of Neolithic and bronze age monuments that sit on the crest of the Cotswold Hills. This magnificent site marks the borderlands between the great counties of Oxfordshire and Warwickshire.
Duration: 30 minutes

No meals included on this day.
Accommodation included: You stay two nights in Stratford-upon-Avon.

Stop At: Warwick Castle, Castle Lane, Warwick CV34 4QU England
You travel to Warwick Castle, one of England’s best preserved medieval castles. Dating back to the time of William the Conqueror, Warwick Castle is often named as one of the best historic monuments in Britain. This 1,000-year-old castle takes you back in time to the marvels of the Medieval Ages.
Duration: 3 hours

You now have a chance to explore the places that shaped the life of Shakespeare. Visit Shakespeare’s birthplace, the Tudor thatched cottage and gardens of his wife, or Mary Arden’s farm where Shakespeare’s mother once lived.

You can also explore the narrow streets of this medieval market town, visit the Royal Shakespeare Theatre, or take stroll along the banks of the River Avon where you can rent a boat or take the ferry across the river
Duration: 3 hours

No meals included on this day.
Accommodation included: You stay two nights in Stratford-upon-Avon.

Stop At: Stow-on-the-Wold Market Square, Stow-on-the-Wold England
Our first stop of the day is in Stow on the Wold, the highest of the Cotswolds Towns. The large market square is testament to the huge markets and fairs that were once held in this hill top market town. Cosy cottages, tiny tea shops, and green gardens: this is your quintessential English village.
Duration: 1 hour

star star star star star
Found just by chance the oldest pub in Stratford The Garrick Inn, it looks so small from the outside but it goes way back once you are in, we only wanted a small meal as we had a huge breakfast at the hotel a few hours earlier. the landlord suggested a share for two which was perfect and only cost about a tenner or so, lovely people could not do enough for us even though we were only having the one drink and a small meal, will be back there next time for sure and they gave me a copy of the history of the pub just because I showed an interest in the building. Thanks Lynette and Felix for making us so welcome

star star star star
I had booked the Air Canada Vacations Shakespeare and Cotswolds tour as part of a week long package. To my pleasant surprise, the 3 day portion of the vacation was sub-contracted to Rabbie's in England, with John as our guide. The overall experience was excellent, mainly due to John who understood the diverse interests of visitors booked on this tour. For instance, on the stop to Warwick Castle, I had no interest in the Disneyfied venue, so he personally showed me the more historical parts of the small town, along with engaging in an interesting conversation on current events in the UK. For me seeing the world is about places but also talking with people, so with this tour, it was a nice combination, thanks to our guide. In terms of the venues, I wish we could have spent more time in the Cotswolds, to experience the setting. Also, visitors should know in advance the entrance fees to the attractions. Another tip would be that there is time in the evenings to pre-book one of the plays by the RSC at Stratford, for theatre enthusiasts. But overall, a very relaxing 3 days that offered an array of experiences and enough time on our own to pursue our own interests. 5 points for our Guide, John. 3.5 points for the Attractions.

star star star star star
This tour was packed full of interesting sites and historical background. Our guide June was warm, friendly and very knowledgeable....always willing to do whatever she could to make the tour meet the wants and wishes of all of us when possible. The accommodations in Stratford on Avon were all really nice...pretty....great breakfasts and friendly hosts. Very much recommend this tour!

star star star star star
We just came back from Stratford-upon-Avon, the Cotswolds & Oxford - 3 day tour with Rabbie's Tours. Our driver guide, Robert Walker, took us to the scheduled places while also included some unscheduled ones. Stories told were interesting and informative as well. Thanks!

star star star star star
Rabbie's was an excellent tour group!!! We had 8 people total on our tour which was intimate. We were able to get to know the other people on the tour from different parts of the world. We loved our tour guide, John Gannon, who was very knowledgeable and accommodating. He gave us a lot of time to explore on our own, and he always communicated clearly the meeting point and time. His history of the sites we visited was very comprehensive. He also took us to some sites that were off the beaten path which were some of our favorite spots. He enjoyed a meal with us and talked to us about life in England. We loved visiting Stratford upon Avon and the Shakespeare area. The Cotswold area is charming and we loved Bampton (site of some of the Downton Abbey filming). We enjoyed the visit to the brewery, Hook Norton. It was quaint and offered delicious tastings. We will definitely use Rabbie's in the future.

star star star star star
Dan, our guide and driver, gave us a good balance of information and quiet time. He was entertaining and easy to listen to. The coach ride was very comfortable and the bed and breakfast was first class. This was a very effective way to see so many places central to England's story.

star star star star star
I have just finished this tour and our driver was Dan who was an absolute delight. The tour itself covered just the right amount of visits to memorable Shakespeare sites,,villages, castles and gorgeous countryside. Dan was funny, personable and had many anecdotes and information to pass on to his guests. My accommodation was in a charming B and B near town. I highly recommend this company and this tour and especially Dan our driver.

star star star star star
A few loose days in London turned in to a remarkable adventure thanks to good weather and Lord Keven's adaptability and knowledge. Our group consisted of only four passengers, so we were each indulged with both questions answered and friendship extended. Aside from praise for our guide, Keven, I share here what I learned--often the hard way--that future travelers might gain from. The Green Coach Station (initial meeting place) is down the street from Victoria train station proper. Head toward the clock tower and it is on your left (kitty corner from mandatory Starbucks Coffee!) up within the elevated shopping area. A number of tour buses take off from here, so make sure you get on the correct bus. The bus itself is very comfortable with loads of storage space, so bring those layers of clothes that you might need, and settle in for the ride. Blenheim Palace: If you have been to Versailles, or another grand European estate, consider wandering the grounds for free rather than paying the hefty entry fee, even though the Churchill exhibit is extensive....I got the feeling we tourists were paying the overhead and upkeep of the current Lord of the Estate and I for one wish I'd kept my wallet closed to him! Rollright Stones: Have the fun of this part of the ride was the English Countryside. Amazing. The Stones were exceptionally interesting in comparison with Stonehenge. Stratford upon Avon: A delightful little town, made all the better by tour guide Keven's insightful tips on pubs for food and drink. I booked a play at the Royal Shakespeare Company Swan Theater before I left the States, and it was a thrilling production just a short walk to and from the B&B where I stayed. I paid the two pounds to gaze at Shakespeare's final resting spot, and was glad to see the endless tourist "donations" of just mentioned two pounds going directly into the maintenance of the ancient church: it was filled with scaffolding and maintenance teams. I did not pay to go into any of the Shakespeare attractions--just a bit too staged for my taste. Warwick Castle: Glad to say we were able to pass this one by and go instead to the British Auto Museum a half hour away. It was great!!!!! Balance of tour: Everything else to me was a bit of a whirlwind overview. The numbers of other international tourists with selfie-sticks got pretty thick, and shops were all catering to the tourist trade.....but hey--this might be just what you are there for and I just don't know it! All in all--a fine solo indenture, made special by Rabbie's care and our guide's personal touches.

star star star star star
My friend and I had such an amazing time touring with Nick Young and Russ Chapman with a small group from London. Of course all the destinations were incredibly beautiful, historic and interesting, but having the experience of our two exceptional Guides was an unexpected delight. These two gentlemen provided excellent driving and care to our little group, while also bringing these areas to life with their knowledge and fun spirit. Thank you Rabbies! Currently planning to visit Edinburgh and London again with my sister in September, 2019. I know my sister will be blown away by our Rabbie's Tour, whichever one we select. Sincere gratitutde for your part in an extraordinary vacation with my dear friend. NanParker240
Previous Next
keyboard_arrow_up