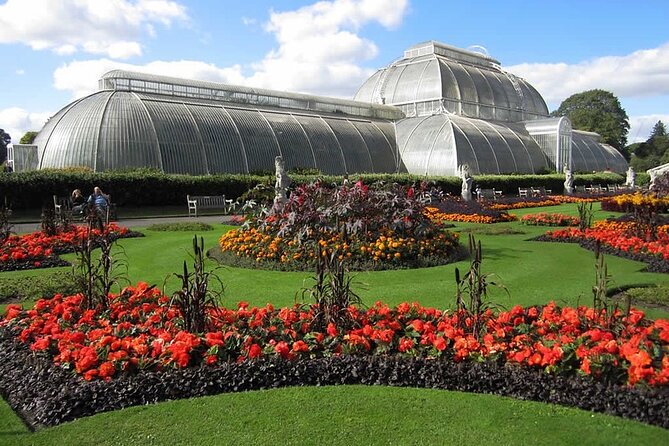 Tickets for Kew Gardens & Access to Self-Guided Tours in London

Get your Kew Gardens ticket and explore the expansive grounds, which include Kew Palace, a 10-story Chinese pagoda, the Temperate House — a giant greenhouse that is as magnificent on the exterior as it is on the inside – and even a waterfall.

Kew Gardens, which opened in 1840, has over 30,000 distinct species of plants, showing many periods of landscape architecture and gardening styles.

Your Kew Gardens ticket also includes admission to Temperate House, the world's biggest Victorian glasshouse, which houses 1,500 species, including those from Africa, Australia, New Zealand, the Americas, Asia, and the Pacific Islands.

You will also get access to 4 tours in London free of charge, including:

- Hidden gems of City of London
- London: Dark side of Medieval Sin City
- Walking around Piccadilly
- Leicester and Covent Garden

These tours are available in the app. They include a ready-to-go itinerary, made by a local guide, GPS navigation, sightseeing descriptions, tips, and advice.

Tickets for Kew Gardens & Access to Self-Guided Tours in London

Visit the world-famous Kew Gardens.
Experience the beautiful botanic gardens and the most biodiverse place on Earth.

Kew has been home to privately held gardens since the 16th century. Frederick Louis, Prince of Wales, and Augusta, Dowager Princess of Wales, bought the land from the Capel family in 1731 and developed a garden for exotic plants in 1759. It had more than 3,400 plant species by 1769.

Sir Joseph Banks' stewardship of the gardens (1772–1819) made them famous, and the collections developed to include specimens from all around the world.

star star star star star
Amazing place. It is like an oasis for those who visit London. Fantastic plants, magnificent glass houses! Be prepared to walk and get your picnic basket with you!
Previous Next
keyboard_arrow_up