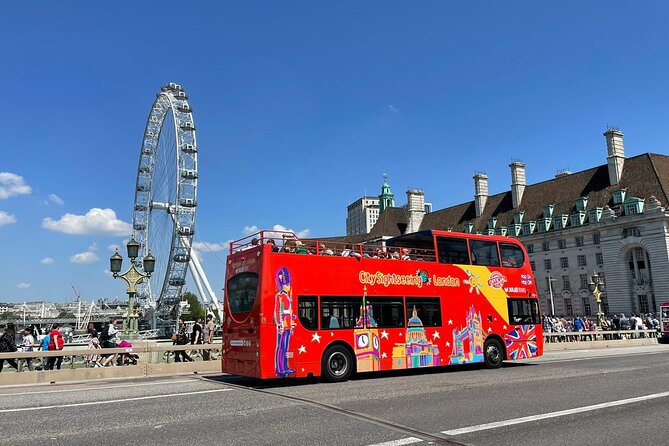 City Sightseeing London on our Hop-on Hop-off Bus tour will be the best way to explore the capital of England with the rich history and culture. Take in the views and visit iconic sites like Buckingham Palace and the Tower of London at your leisure.

We have selected key tour stops to allow you to see all the sites London has to offer in touching distance. From The Shard, to Big Ben to Oxford Street, we cover all the best places in London. With our 24 or 48HR ticket, we even offer a free river cruise to explore London by water (excluding the City Sampler Ticket). Along with a free London self-guided podcast walking tour.

star star star
Once we found a bus the tour was awesome. We were able to see a lot of amazing sites. The only downside is the amount of buses available. We had a hard time finding the bus pickup location was and waited awhile once we found it.

star star star star
This was a typical hop on hop off sightseeing experience. Despite miserable traffic condition in London due to Queen Elizabeth’s death, buses were pretty much on schedule. The best part of the tour was the river cruise on the Thames.

star star star star star
Moving to a Viking Cruise ship took too long and we couldn’t use the ticket. But loved England in a Day tour to Stonehenge, Bath, the Cotswolds and Stratford on Avon the day before.

star
5point Review My first scathing review ever. City SightSeeing you deserve a minus star 1. Thumbs Up : Hop on Hop off is a great concept. We covered all major london attractions (Big Ben, westminster, piccadilly, trafalgar, London eye, tower bridge, london bridge, buckingham etc.) in a single day. And we could have saved more time if not for City SightSeeings atrocious service. 2. Thumbs down : Well, I can write a whole essay on it but the bottom line is they dont have enough buses. Almost on all stops we had to wait and wait for buses to arrive. Despite buying the bus tickets, we almost did half of the journey on foot. On stop 20 we were told that their buses stop at 6.00 PM, (its 8 pm on their brochure). We were just roaming around when we saw a bus (after almost 40 minutes) . We boarded the bus and then on next stop (Stop 1) the bus halted for another twenty minutes. We covered a few stops on the bus and then at an abrupt stop the driver told this is the last stop and bus journey ends here. Seriously?? 3. Oh No factor : Plenty of them. Their bus stops are not marked, so good luck finding them. (On 2 occassions we saw a bus fly by us because we were not standing on exact spot and their spots are hard to locate on map. Other service providers(toot or bigbus) have their names written on stops. Only choose city sight seeing if you want to spend your day waiting for buses on stops (atleast 3 to 4 buses of other companies passed on every stop before their bus arrived. Other services had buses waiting on stops for passengers whereas this company made their passengers wait forever.) Due to limited buses their buses are overcrowded (if you want an upper deck seat you might need to go on a war here 😊) 4. Money Matters : Dont waste your money with City Sight Seeing even if they offer you half the price. We saw the services of other companies (toot and big bus) they had 3 times better frequency and service. 5. 5point Experience : Hop on hop off is great for experiencing this hitoric city in One day but City sight seeing is the worst Company My ratings : Surely go for Hop on hop off but AVOID city sight seeing at all cost

star star star star star
I would highly recommend this way to see the city especially if you are short on time as I was. Emma was the best tour guide. Very knowledgeable and entertaining.

star
My husband and I went on this City Sightseeing London Hop-on Hop-off Bus Tour and to our disappointment, we were confused and agitated by the directions given. There was no clear indication where the return stops would be. One of the bus drivers did not offer any help, and another pointed to a wrong place where the other bus would be. We, along with other visitors, waited around in an incorrect stop for over half an hour. When the bus driver made a stop, he should have announced the name of the stop and number in reference to their map marking. I don't recommend anyone to hop on this awful bus tour.

star
This is the worst of the city sightseeing tours I've ever taken, not given enough space to list why!

star
It’s a shame. My girlfriend and I had waited for like 1.15 hours to get the bus, which never arrived. The worst thing was seeing other bus companies coming to the station while We were waiting, I counted like 7 tootbus and 5 Bigbus. This means that the situation was not caused by the traffic. Honestly, I consider it almost a scam. Never with this company in London again.

star star star
An interesting bus tour but definitely not enough buses. We saw 6 Big Bus tour buses pick up at our stop in the time we waited for one City Sightseeing bus. We had to wait 30-40minutes each time.
Previous Next
keyboard_arrow_up