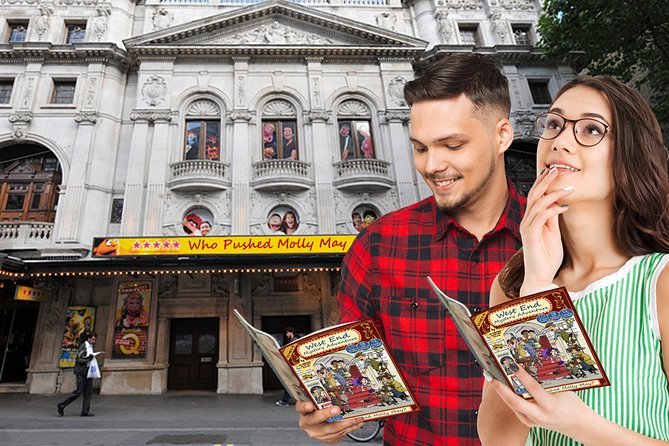 London Treasure Hunt Adventure: The Mystery of Who Pushed Molly May?

The legendary showbiz mystery..
.. unsolved for 100 years..
Until now.

Join the adventure, and turn the West End into a GIANT outdoor escape room!

Molly May’s opening night ended in disaster when she broke her leg falling down the theatre stairs in front of waiting fans & paparazzi, insisting that she'd been pushed.

Was it an act of revenge?
Nobody knew.

But the villain left a trail of clues..
And this is where you come in.

Your challenge is to track down hidden objects, decode symbols, and uncover hidden messages, as you eliminate suspects and gradually unravel the crime.

And an exciting twist awaits..

Make it to the end and you'll be struck by an amazing ‘wow’ moment when the case is solved and the villain is revealed before your eyes!

Don’t let the villain get away.. Your time to start is now!

London Treasure Hunt Adventure: The Mystery of Who Pushed Molly May?

Simply collect your self-guided activity booklet from The Lamb & Flag pub and begin your treasure hunt adventure! Your booklet leads you through the heart of London's 'Theatreland', as you trace the life and work of its fictional central character, 1920's actress 'Molly May'.

Solve the clues, eliminate the suspects, and unmask the mysterious villain behind the West End's most infamous act of betrayal!

On your adventure you will discover London's amazing hidden history, visit its most atmospheric taverns, and soak up legendary stories of the city's most notorious scoundrels!

And an exciting twist awaits…

Simply grab your Mystery Guide™, head to the start, and set off at a time that suits you.

Don’t let the villain get away... Your time to start is now!

Each activity booklet contains:
- 16 cryptic clues to solve at a variety of locations throughout the West End.
- True local history stories for each location.
- Maps and directions.

star star star star star
We love these mysteries , this is the 6 th we have done , it’s a fun way of seeing a place through different eyes , finding little gems of interest , learning a bit of history and of course having a drink and something to eat in places we would never have found . Have a go , you will love it .

star star star star star
Very enjoyable tour, well researched and easy to follow. Great pubs, although the French House was extremely crowded. Great to see parts of London that you might miss on an ordinary visit. Highly recommended.

star star star star
Great walk, very easy to follow instructions. Shame the last stop with the answer the pub was closed due to fire! Would definitely do another one.

star star star star
This was great fun, and informative. Would suggest the second clue is made more clear as to what format to write numbers. Also, you only need one book per team, so feel I’ve wasted £7.50 buy booking for two people :(

star star star star star
We had an amazing time doing this adventure. Visited areas of London we had never been to before and certainly went in pubs we would never have found. A great way to spend an afternoon (and evening)

star star star star star
We had a brilliant time doing this mystery guide, would highly recommend it. It would make a great gift for any visiting friends or family. Easy to follow directions, great clues to fathom out with lovely pubs. Looking forward to the next one 👍

star star star star star
Thoroughly enjoyed discovering 'Who pushed Molly May'. Went to areas of London not seen before! Extremely well written and laid out, loved the mini maps. Next stop Bath!

star star star star star
We got all the family involved and took turns reading and finding the clues around London. We found it great fun, very interesting facts/history about each stop, even though Molly May may be fictitious, we found lots of stops/pubs we had not visited before and learnt about their history. Highly recommend
Previous Next
keyboard_arrow_up