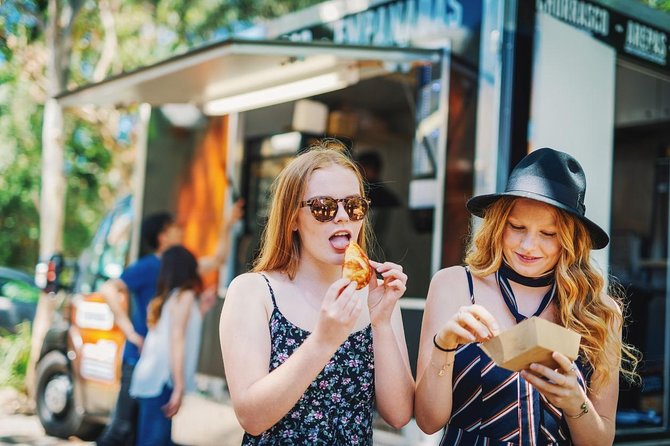 We aim to convince you that British Food is not that bad :)

In a small group, you will discover the South Bank & Borough Market. These are two of the most loved areas of London which offer the most delicious and best variety of food in town.

Here we will discover the best of British food from local artisans.

At the start we will head through the South Bank, stopping at renowned landmarks such as Shakespeare’s Globe, The Anchor Pub and Borough Market (1000-year-old Food Market: oldest in Europe).

We will nibble, taste & try food all along the route while you discover some unusual facts & stories about this incredible neighbourhood and its landmarks.

EUR 97
p.p. onwards
Itinerary
This is a typical itinerary for this product

Enter Borough Market where we will get to indulge in some British speciality food!

Walk by the Golden Hinde

Walk past the Clink Prison Musuem

Walk past the Shakespeares Globe Theatre

We will walk past the art gallery "The Tate Modern".

Walk over the Millennium Bridge.

We will see St Pauls Cathedral from the Riverside

Walk through Londons famous Southbank and walk along the River Thames.

star star star star star
Laurent was an amazing guide taking us through all the hidden gems in the market with zero queue times. The best cheese, oysters, sausage rolls, fish and chips, dessert, tea, and more. Would highly recommend and would do the experience multiple times for guests. We learned so much and the food was phenomenal.

star star star star star
Laurent was a wonderful guide. He navigated us through the market and showed us some of the best places to try foods and drinks. We got to skip the very long lines! We all had plenty to eat throughout the tour and learned some history along the way. He was interesting, courteous, and professional. It was a great highlight of our trip a d would definitely recommend!!

star star star star star
I had a wonderful tour through Borough Market and the south shore of London. I loved the stories that my guide shared with me about the history of the neighbourhood; it was a great addition to all the delicious food!

star star star star star
The food we got to eat on this tour was delicious and the guide who took us across London was extremely knowledgable in the history of the many attractions we got to walk through.

star star star star star
Message on behalf of the family visiting - It was wonderful and absolutely loved all the foods, so much to eat and see
Previous Next
keyboard_arrow_up