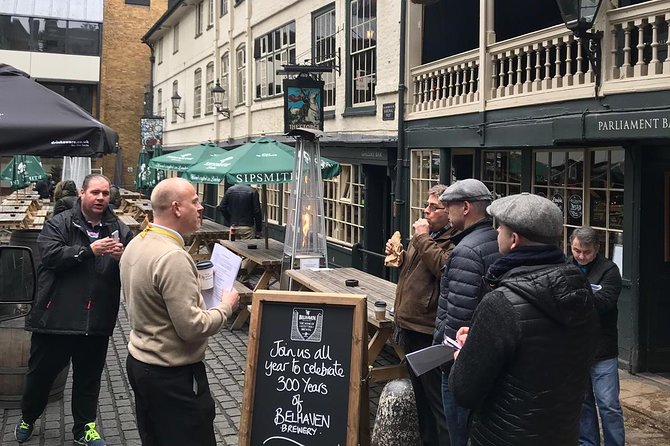 Tour with a fun “real Londoner” having nearly 27 years experience of driving London’s streets and alleyways and 6 years tour guiding, gathering tons of information to share with you!
Travel in luxury twenty first century London Taxi with all modern considerations up to 6 seats.
Guide has ability to bespoke tour to accommodate your interests as I don’t follow a particular set route.
Ability to look after you ... regularly stopping for photo shots, coffee shots and rest breaks throughout our tour.
Sharing my keen knowledge of historical London events and personalities from the early Romans through to Prince Harry

INR 23,565
p.p. onwards
Itinerary
This is a typical itinerary for this product

Amaze at a truly magnificent gothic building which is home to UK Democracy , Big Ben and House of Lords

Step back in time and see a 500 year old Tudor Palace which was built for Henry VIII and his 6 wives. It is also currently the home of Prince Charles and Camilla.

The home of British Prime Minister

Witness the rebuilt theatre where stage, performances and stories were told through the writings of Sir William Shakespeare by the banks of the Thames River.

The jewel of London’s Royal Parks which looks amazing all year round. Look out for the Pelicans, Gardeners Cottage and beautiful flowers.

Observe the very reason why London exists ... Used as a means of transportation it helped London grow into the busiest trade centre in the world. Painted and Pictured amazingly well for Centuries.

Traveler pickup is offered
Tours can start from any address in Central London.
Tours starting outside Central London can be accommodated but a separate charge will have to be agreed (including Heathrow and Gatwick Airport)

star star star star star
We highly recommend starting your visit to London with this tour. Barry is great! He picked us up at our hotel and gave us the grand tour. We visited around 18 sites in 4 hours but never felt rushed. We saw some of the traditional attractions but we also visited the streets less traveled and heard the stories of those that lived there. His perspective as a London native and a history buff allowed us unique insights into this grand city.

star star star star star
Barry did a great job entertaining our family on this tour and our first time in the UK. We were able to see all the major London sites and have some fun doing it with or kids. Highly recommend it for the time limited traveler!

star star star star star
It couldn’t have been a better experience. Barry was an excellent and informative guide. We we in great hands. When we return, we will most definitely reach out to Barry again.

star star star star star
Highly recommend. We took a 3 hour tour and it was a fantastic way to see some of the important sights in London. Barry is very nice and extremely knowledgeable. His black taxi is beautiful and brand new.

star star star star star
I thoroughly enjoyed my Private City tour with Barry. His knowledge share of All England is outstanding. And he communicates in a fun, friendly way. He can also customize your wishes with his expertise. What’s even more amazing is how he can navigate his way through narrow, cobblestone streets in Old England in his beautiful and elegant black electric vehicle:)!

star star star star star
The best tour you can take to see London! Combining this tour + Buckingham Palace + Tower of London + The British Museum you'll see the most important / coolest parts of London in my opinion. Barry is highly knowledgeable, very professional, and can customize your schedule based on your interests. He took us to many "hidden gem" areas in addition to major sights and provided us with both the history behind places along with "fun facts". He also took pictures of us without asking on his phone and sent them to us later, which was much more useful than I expected.

star star star star star
Best way to experience all the major sites and hidden stories of London in this comfortable and enriching tour. .Barry was extremely knowledgeable and entertaining for all of our group of varied ages. I wish I had a Barry in all of the cities I visit!

star star star star star
Fabulous fun time! Kept us interested the whole time with interesting facts and history. Included a cool surprise! Great way to see all the sites up close. Recommend 100%. 3 teens and 2 adults were comfortable in the large cab and thoroughly enjoyed!

star star star star star
Barry was wonderful and very knowledgeable of Londons history. He took us to the top areas everyone comes to London for but also amazing places we would have never known to see. He also takes your pictures in front of historic sites so you will have memories for a lifetime. We would highly recommend Barry for your guided tour.
Previous Next
keyboard_arrow_up