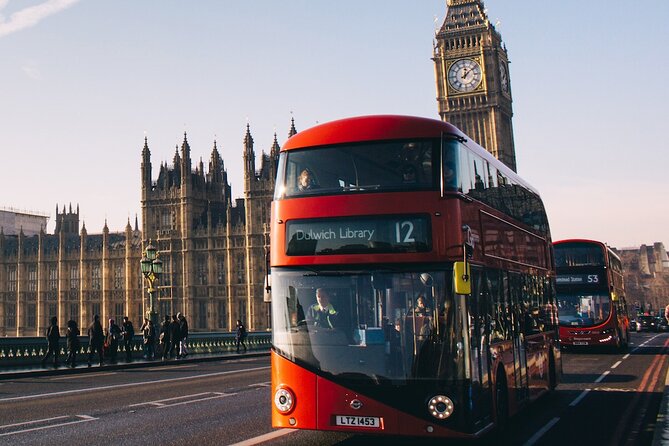 The day tour will start at 10.00am at Charing Cross Train Station station. I’ll start by showing you all the main attractions in London’s famous Westminster through an amazing walking tour

This can be seen as an opportunity to meet new people while seeing all London sites in ONE DAY! We’ll be seeing sights such as; Trafalgar Square, Changing of the Horses Guard Parade, St James’ Palace/Park, Buckingham Palace, Westminster Abbey, iconic London Eye and the mighty Big Ben. Afterwards you’ll enjoy a brunch break and at a British cuisine.

Finally, we’ll end the tour at 4.30pm with a cafe trip. On this day you'll get a tour guide, teacher, local expert but also a new friend

INR 4,982
p.p. onwards
Itinerary
This is a typical itinerary for this product

Trafalgar Square is a public square in the City of Westminster, Central London, established in the early 19th century around the area formerly known as Charing Cross

The National Gallery is an art museum in Trafalgar Square in the City of Westminster, in Central London, England. Founded in 1824, it houses a collection of over 2,300 paintings dating from the mid-13th century to 1900.

Buckingham Palace is a London royal residence and the administrative headquarters of the monarch of the United Kingdom. Located in the City of Westminster, the palace is often at the centre of state occasions and royal hospitality

Parliament Square is a square at the northwest end of the Palace of Westminster in the City of Westminster in central London. Laid out in the 19th century, it features a large open green area in the centre with trees to its west, and it contains twelve statues of statesmen and other notable individuals

St James's Palace is the most senior royal palace in the United Kingdom. It gives its name to the Court of St James's, which is the monarch's royal court and is located in the City of Westminster in London

St James's Park is a 23-hectare (57-acre) park in the City of Westminster, central London. It is at the southernmost tip of the St James's area, which was named after a leper hospital dedicated to St James the Less. It is the most easterly of a near-continuous chain of parks that includes (moving westward) Green Park, Hyde Park, and Kensington Gardens.

Piccadilly Circus is one of London's most popular tourist destinations. Sit by the famous statue of Eros (a popular meeting point), or take some photos

St Paul's Cathedral is an Anglican cathedral in London that is the seat of the Bishop of London. The cathedral serves as the mother church of the Diocese of London. It is on Ludgate Hill at the highest point of the City of London and is a Grade I listed building

Tower Bridge is a Grade I listed combined bascule and suspension bridge in London, built between 1886 and 1894, designed by Horace Jones and engineered by John Wolfe Barry with the help of Henry Marc Brune

The Millennium Bridge, officially known as the London Millennium Footbridge, is a steel suspension bridge for pedestrians crossing the River Thames in London, England, linking Bankside with the City of London.

Several bridges named London Bridge have spanned the River Thames between the City of London and Southwark, in central London. The current crossing, which opened to traffic in 1973, is a box girder bridge built from concrete and steel. It replaced a 19th-century stone-arched bridge, which in turn superseded a 600-year-old stone-built medieval structure. This was preceded by a succession of timber bridges, the first of which was built by the Roman founders of London

HMS Belfast is a Town-class light cruiser that was built for the Royal Navy. She is now permanently moored as a museum ship on the River Thames in London and is operated by the Imperial War Museum.

Tate is an institution that houses, in a network of four art galleries, the United Kingdom's national collection of British art, and international modern and contemporary art. It is not a government institution, but its main sponsor is the UK Department for Digital, Culture, Media and Sport.

he Queen's Life Guard change daily on Horse Guards Parade at 11:00 weekdays and 10:00 on Sundays.

The British Museum is a public museum dedicated to human history, art and culture located in the Bloomsbury area of London. Its permanent collection of eight million works is among the largest and most comprehensive in existence. It documents the story of human culture from its beginnings to the present

star star star star star
Ollie’s nighttime tour was perfect. We visited about 10 clubs and I enjoyed every one, couldn’t stop dancing throughout the night and Ollie was such a vibe. I’m definitely coming back.
Previous Next
keyboard_arrow_up