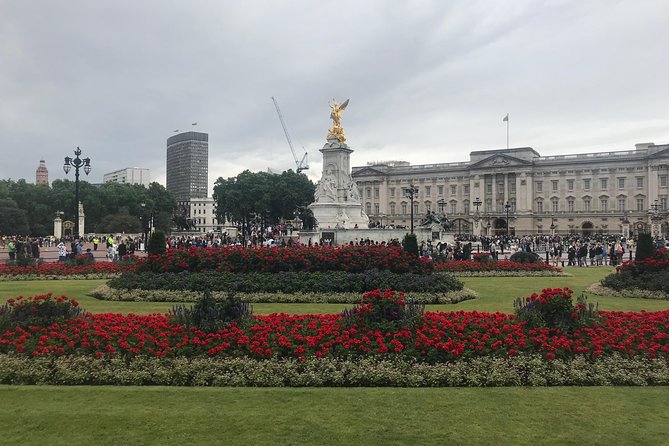 The day tour will start at 10.00am at Charing Cross Underground station. I’ll start by showing you all the main attractions in London’s famous Westminster through an amazing. We’ll be seeing sights such as; Trafalgar Square, National Gallery, St James’ Palace and Park, Buckingham Palace, Churchill War Rooms, Westminster Abbey and the iconic London Eye. Afterwards you’ll enjoy a short brunch break and at a British cuisine.

Afterwards I’ll take you to go and explore other famous parts of London including St paul’s Cathedral, Tate Modern Gallery, Tower Bridge and London Bridge while teaching you all the hidden tips and tricks of London. you’ll spend this time touring and exploring the best shopping centres, children’s play areas, pubs and party hangouts.
Finally, we’ll end the tour at 4.30pm with a café trip where you’ll experience Britain’s classic popular treats and drinks In the end, on this day you'll get a tour guide, teacher, local expert but also a new friend.

INR 8,585
p.p. onwards
Itinerary
This is a typical itinerary for this product

St Paul's Cathedral, London, is an Anglican cathedral, the seat of the Bishop of London and the mother church of the Diocese of London.

Several bridges named London Bridge have spanned the River Thames between the City of London and Southwark, in central London.

Tower Bridge is a combined bascule and suspension bridge in London, built between 1886 and 1894. The bridge crosses the River Thames close to the Tower of London and has become an iconic symbol of London.

The British Museum, in the Bloomsbury area of London, United Kingdom, is a public institution dedicated to human history, art and culture.

Trafalgar Square is a public square in the City of Westminster, Central London, built around the area formerly known as Charing Cross.

The National Gallery is an art museum in Trafalgar Square in the City of Westminster, in Central London.

Piccadilly Circus is a road junction and public space of London's West End in the City of Westminster. It was built in 1819 to connect Regent Street with Piccadilly.

St James's Park is a 23-hectare park in the City of Westminster, central London.

St James's Palace is the most senior royal palace in the United Kingdom.

Buckingham Palace is the London residence and administrative headquarters of the monarchy of the United Kingdom.

The Churchill War Rooms is a museum in London and one of the five branches of the Imperial War Museum.

The London Eye, or the Millennium Wheel, is a cantilevered observation wheel on the South Bank of the River Thames in London.

Leicester Square is a pedestrianised square in the West End of London, England

Watch the changing of the Queen's guards, walk with the horses guard parade and hear the marching band music.

star star star star star
Great day out! It was a wonderful experience touring London, I got to visit all the landmarks I had wanted to see and guide made sure that I was comfortable.

star star star star star
Highly recommend the private day tour in London. David Platt was our quite, picked us up at our hotel and for 7 delightful hours showed us the sights of London. He was so knowledgeable of London history and highlighted so many wonderful sights. He was great at offering group pictures of us which we will hold dear for ever. Definitely a 5 star experience!

star star star star star
Great overall view of key sights and attractions, as well as good advice on what to see further if given more time. Customized the tour for us based on our preferences. Ollie was a very fun guide to have for the day and gave it her all to ensure we were happy with the experience!

star star star star star
I have previously booked the exciting tour with this company and enjoyed it loads so I this time I booked the private tour and it was even better than I expected. Having a one on one experience of London really helped me see more of the city and bits that I missed last time. My tour guide was extremely helpful as well and made the tour great. I loved my time in London and I will definitely book another tour with them when I am back.

star star star star star
It was a lovely experience, as the guide took time to explain the origin of the places. The tour was at a steady pace and was not rushed. Memorable!

star star star
The tour guide was very friendly and tried her best to show us the attractions as much as possible. When signing for the tour I thought that the price was reasonable given the fact that the lunch and transportation and afternoon tea were included as was mentioned in the tour description. Unfortunately only one of us had transportation coverage by the tour guide. When it came to the lunch, she gave one serving of lunch for two of us without asking whether we wanted a full serving or a half. There was no afternoon tea/ coffee. Considering that we didn’t have the above mentioned services the tour is expensive in my opinion.

star star star star star
Highly recommend if you want a private tour with a fun guide that becomes your friend. Ollie will cater the tour to your needs, including providing a car for additional cost. As an architect I had some specific requests that are out of ordinary, plus the standards “see London in a day”. Ollie crammed as much in as she could in 6 hours. Try it!

star star star star star
Great tour and a wonderful day spent visiting all the places on my bucket list. Ollie was an amazing guide, sharing all the information/history, making the tour comfortable, and the best places for photos...loved the tour, thank you so much!!!
Previous Next
keyboard_arrow_up