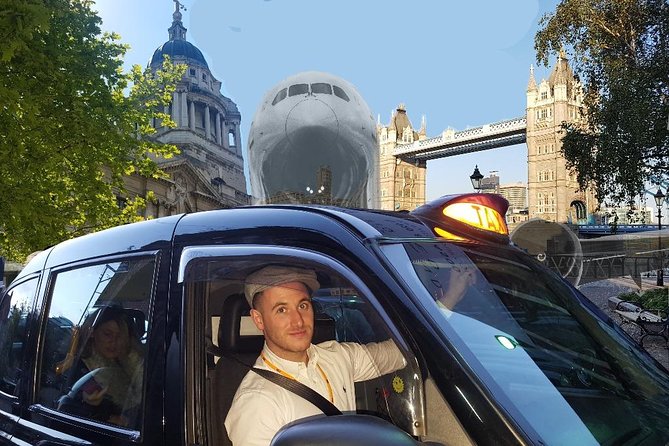 From pickup at the airport to drop-off; you will be completely entertained and enjoy from the ultimate sightseeing experience from the comfort of a traditional Black Cab.

What better way to spend time on your layover?

Whilst you are guided by your Londoner Taxi Driver, you will lbe amazed, immerse yourself in London culture and fully experience the city's rich tapestry of history and culture.

The tours can be customised to your personal interests; there is much to see and this package will offer you the all in one.

Our London Black Cab Tours are the best sightseeing experiences to see all of London. Our guides have plenty of amazing knowledge with entertaining stories on all the landmarks and sights!

INR 59,109
p.p. onwards
Itinerary
This is a typical itinerary for this product

The Royal Park in Kensington; one of the most beautiful parks in the world. History of Georgian London, Prince Albert, The Great Exhibition, Highwayman, The Plague, Civil War and more

Marble Arch aka Tyburn, now the official entrance to Hyde Park, the former spot of execution; the Tyburn Tree

Mayfair in Westminster; home of celebrities & the wealthy, filled with a rich history including Civil War, World War 2, American Revolution, home to Rock and Roll stars and much more!

The Official London Residency to the British Monarchy

The first Royal Park founded in the area, on the foundations of the former Whitehall Palace and the beautiful St James's Palace. See the beautiful scenery overlooking Buckingham Palace and learn about the rich history surrounding it

See the famous Horse Guards Parade, host of the Queen's Official inspection of the Queen's Guard "Trooping The Colour". Learn about Whitehall Palace, the Queen's Household Regiments, Ian Fleming & The Royal Naval Administration and much more!

See the world famous Westminster Abbey "Old Peculiar". Learn all about the 1000 years of history the iconic building has

See the famous Big Ben clock and the Houses of Parliament (Westminster Abbey). Learn all about the history of Westminster, the English Civil War, Kings & Queens of Britain and much more!

Sightsee in Whitehall, the former ground of Whitehall Palace (home of Henry VIII and more) and now the centre of British Government.

See Downing Street, the residency and office of the British Prime Minister

Famous for Sweeney Todd the Demon Barber, but the heart of the Press Industry of Victorian & Georgian London. The gateway into The City of London, the city within London

St Paul's Cathedral, the famous landmark of The City of London. History going back 1400 years! Learn all about the Royal Weddings, The Great Fire of London, The Blitz and much more!

See the Central Criminal Court "The Old Bailey", build on the foundations of London's notorious Newgate Prison. Learn about the old crime and punishment of the city, history going back centuries and much more!

Smithfield Market, built in the north of The City of London. Host of the old Smithfield execution spot; see the memorial to William Wallace, learn about Bloody Mary and the Peasant's Revolt!

See the medieval Guildhall, the heart of The City of London. Visit in the day and walk down into the ancient Roman Amphitheatre; dating back to AD120!

See the tallest building in Europe! At 1004ft high, the beautiful structure stands over Southwark and The City of London

The Borough Market, built over 700 years ago. Film set to many movies including Harry Potter, Bridget Jones and Lock Stock & Two Smoking Barrels

See the world famous Shakespeare's Globe Theatre on the Southbank. Admire the beautiful view of the structure overlooking the River Thames whilst learning all about the history of William Shakespeare, the history of entertainment and vice in medieval London!

See the world's most famous bridge; Tower Bridge. Drive over and admire the view crossing from Southwark to the City or stop for amazing views and photography opportunities

See the famous Tower of London; the stunning White Tower, the castle looming over The City of London that has stood for 1000 years! Learn all about the history of the Tower, the Roman Settlement and occupation since the foundations of London

Traveler pickup is offered
We will pickup all of our guests from either the terminal you arrive at or in the event of an overnight layover; we will pick you up from the hotel.

From the airport we will travel to Central London to begin the tour to be then dropped back at the airport/hotel.

star star star star star
Not wanting to Waste our layover, we hired Billy Cullen from black cab history tours, to take us on a whirlwind adventure around London. Not only was he knowledgeable about history, but he had a fantastic personality and a great sense of humor. He made the trip fun and interesting, but most importantly, he directed us to some of the best pastries in town...LOL!!

star star star star star
I’m not sure how we got so lucky to have had Billy as our guide but we were! He is so knowledgeable, kind and accommodating. We will treasure our day In London always. Thank you Billy! We will be back.

star star star star star
Billy - All I can say is WOW what a tour guide. We had an 8 hour tour of London and he did not disappoint. I will definitely recommend him to friends or family traveling to London. He was very knowledgeable and a great person with a sense of humor. We couldn't have asked for a better trip.
Previous Next
keyboard_arrow_up