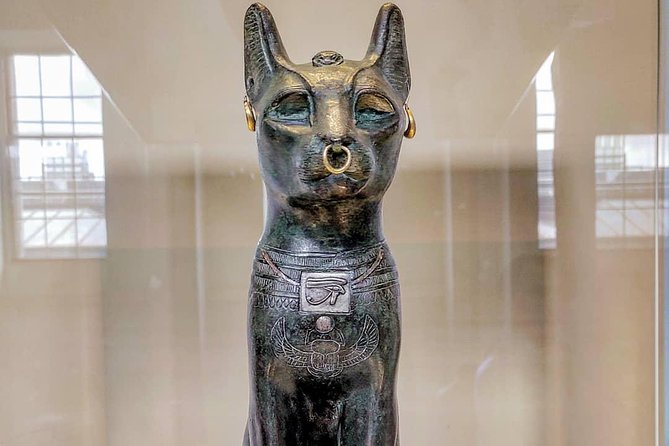 Crash course in archaeology at the British Museum

Follow in the footsteps of the great archaeologists, relic hunters and explorers who acquired the treasures of the British Museum, and learn about their adventures and the hazards they braved to make their astounding discoveries.

You’ll unlock the secrets of the British Museum’s extraordinary collection with a qualified archaeologist, getting to grips with the history of human civilisation, exploring our earliest origins in Africa, to the great empires of Egypt, Assyria, Greece and Rome.

Along the way, you'll tour the British Museum's most famous galleries, including Ancient Egypt and Assyria, Ancient Greece and Rome, the Vikings and the Aztecs, discovering world-famous artefacts such as the Rosetta Stone, the Parthenon Marbles and the Lewis Chessmen.

You'll also have some fun learning to play one of the world's most ancient board games, The Royal Game of Ur, whose rules were deciphered by British Museum scholars, and learn how to write your name in Egyptian hieroglyphs.

Crash course in archaeology at the British Museum 09:45

INR 3,122
p.p. onwards
Itinerary
This is a typical itinerary for this product

The world's greatest museum, home to a dizzying array of treasures from humanity's past.

star star star star star
I thoroughly enjoyed the tour - it surpassed all of my expectations. Rossa quite literally brought history to life through his passionate and very deep knowledge of our past. He took the time to answer all of our groups individual questions with great depth and accuracy. This tour is an absolute must for anyone interested in learning about our ancient past. We even got to try our hand at the earliest known board game - see photo. Thank you Rossa!

star star star star star
We highly recommend this tour for children and adults. Rossa is highly knowledgeable and managed to share his knowledge and passion about archeology, history of civilisations and the British Museum! Amazing that we covered 1/5 of the museum in only 5 hours - all of us, children and adults enjoyed it greatly and learned very much! Particularly good for children to learn about civilisations, Egypt, Mesopotamia and Greece but also Rome, Vikings and Roman Britain!

star star star star star
Rossa is a fabulous guide! We didn't simply tour the museum - each stop was a mini-lesson in the story of the history of civilization. I plan to take the tour again and bring my teenage daughter! Thanks Rossa!!

star star star star star
This was so very interesting. Rossa gave a tour for anyone who is curious about history and early human beginnings. He also hit some significant high points in what otherwise could be a very overwhelming museum.

star star star star star
Been traveling to over 70 countries, I would say this is THE BEST archeology museum tour I ever did. The guide tells us very great and interesting stories in depth, but also dives deeply into the ancient civilization, culture, agriculture, farming, humanity, religion, etc. It makes us think a lot and reflect on our modern world as well as the ancient. 5 stars recommendation. Also this is probably the longest tour you could get in the market, almost 6 hours long and I learned sooooooo much! Thank you.

star star star star star
We really appreciated how well curated the tour was, with excellent highlights feom Rossa about how certain items in the museum tie human history together. We learned SO MUCH on what was a truly unique experience!

star star star star star
I was absolutely bowled over by how good this course was. I have been to the British Museum before but this brought the whole thing alive for me. Rossa's knowledge and Attenborough-style delivery was worthy of any film or TV documentary and I would recommend this to anyone who has even a passing interest in archaeology or related subjects. The agenda for the course and Rossa's engaging way of delivering his deep knowledge meant that the context and background of key exhibits at the museum almost brought them alive. I wish I'd had teachers like him at school.

star star star star star
Rossa is an expert on archeology. He's a clear communicator and story-teller. This tour is rather more deep than broad, in that it selects exhibits to explore themes in archeology and history, rather than trying to cover a wide range of subjects. Very insightful, and equips you with the concepts to fruitfully explore the vast collection of the British Museum. Recommended.