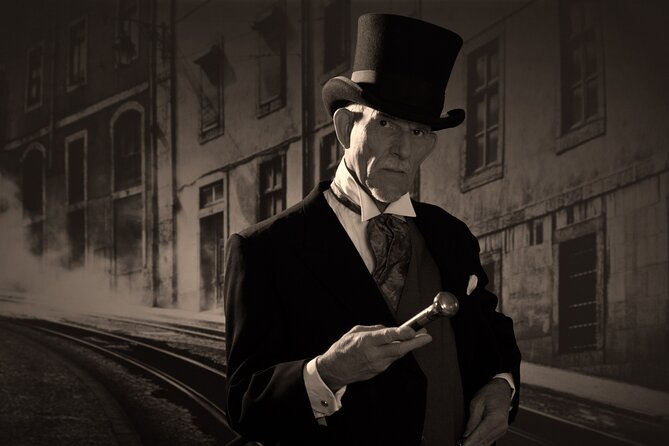 Explore London’s dark, mysterious past and hear chilling tales from beyond the grave — if you dare — on this 1.5-hour London Bridge ghost walking tour. Follow a guide through the medieval streets of London Bridge and Southwark by night. Hear of the ghosts that linger in England's oldest prison, discover hidden graveyards where the dead won’t rest, and learn of the lawless criminals who lived in London down the centuries. During your tour, hunt for ghosts in a 16th-century pub and watch out for the sorrowful spirit of Miss Murray.

INR 1,261
p.p. onwards
Itinerary
This is a typical itinerary for this product

Walk through the markets and hear about it's horrible history

Hear about The Shard's unusual pet

Discover the link between the Golden Hinde, The Queen and The Devil

Visit the exterior of one of the world's oldest prisons, The Clink

Visit the graveyard for paupers

Walk in Shakespeare's shoes at his favourite pub

See the infamous bridge, and it's often mistaken sister!

star star star star star
The trip was lots of fun and very interesting. Learnt a lot about what haunts the area around London Bridge, as well as a lot of history about the area. Our guide was probably one of the best guides I've been with, as she was very engaging and knew her stuff very very well. (Can't remember her name but if you see this let her know!) My favourite part was the story about the Winchester Geese!

star star star star star
From the Winchester Geese to the decapitated head of William Walace, the trip left me with a lasting impression and I will never think of London in the same way again. Maria, with her passion and intrigue really made the experience very enjoyable and interesting. I look forward to revisit these places once they reopen.

star star star star star
A great guide who showed us a lot of the more obscure sites around London Bridge, some really cool stories that were unique and spooky! The guide was quick-witted and put in a lot of historical context that enhanced the stories immensely for us. Honestly, one of the highlights of our trip, would absolutely recommend to a friend.

star
I booked this tour for Saturday 18th January and I have since received a text informing me that the tour would no longer be going ahead but would I accept complimentary tickets for the Haunted Pub Tour instead plus courtesy tickets for a future LB Ghost Tour! I accepted the pub tour tickets and asked for details to be sent on, I haven’t received a reply to that and the number is unobtainable when I attempt to call it. I have since noticed that the number is actually a South San Francisco number!! I have now cancelled the tour through Trip Advisor as alarm bells are ringing. Beware!

star star star star star
June 2021 Had the best tour guide through the streets around London Bridge. The information given to our group pictured a gruesome time in our passed. Even though you can read about the dark times hundreds of years ago, being told, seeing the actual areas brought it all alive. I must say a big thank you to our guide, who was very knowledgeable, entertaining and engaging. So a big thank you to Maria B.

star star star star star
Great informative tour with a brilliant lady guide. It went so fast and we heard some ghoulish tales. I would recommend in a heartbeat

star star star star star
A great tour guided by great host, Maria I believe she was. Stories were interesting and the host clearly knew what she was talking and her passion for history was clear. A warm recommendation for this tour! Learned lots of new things about London’s history, got to see new places.

star star star star star
Really interesting tour taking us to places not seen before and fascinating stories of times gone by. Guide was very bubbly, informative and knew her history
Previous Next
keyboard_arrow_up